Following earlier reports that Jim McCann would be bringing back Alpha Flight, that artist Phil Jimenez was doing an Avengers variant cover featuring Alpha Flight, and word that Jimenez and McCann may be tied to an ongoing Alpha Flight series, comes word of a one-shot that may kick the revival off! 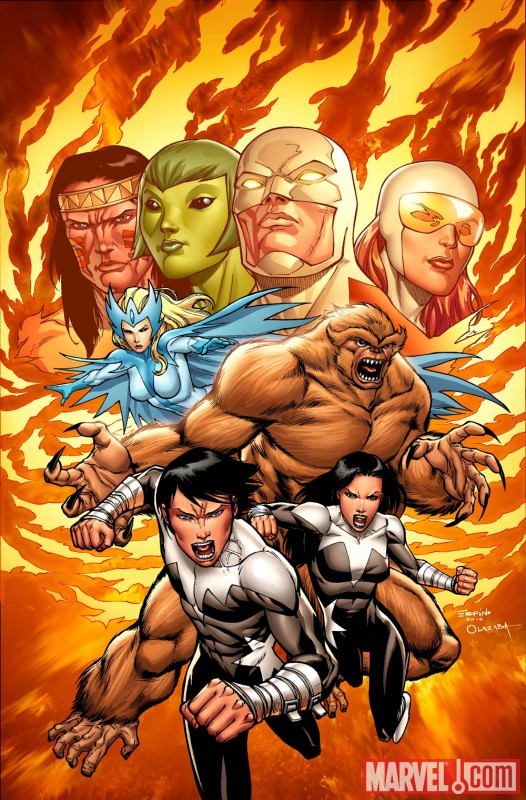 Everyone’s favorite Canadian super heroes return in a big way this November with CHAOS WAR: ALPHA FLIGHT, written by Jim McCann-but the reunion might not be on the best terms. In CHAOS WAR #3, Chaos King literally destroys the afterlife which results in plenty of dead souls finding their way back to Earth.

“It fits in with the events that happen at the very end of CHAOS WAR #3,” McCann reveals of the plot. “Because of the Chaos King’s actions and the threats that are unleashed, suddenly this war gets a lot bigger, very quickly!”

Thanks to the majority of the classic Alpha Flight line-up dying in battle against the Collective in NEW AVENGERS #16, expect plenty of mixed emotions from surviving members like Sasquatch.

“The actions of the Chaos King and his forces make one of Alpha Flight’s greatest foes come to an arrangement, so there is essentially a deal with the devil,” McCann explains. “The dead members are brought back to this plane, but at a cost. For one member it is absolutely worth it, but for another, this is the worst possible thing that can happen.”

“This is my first event crossover, so it’s been interesting to see the main book and the structure of the overall story and then work on how my story fits in organically,” he continues. “What does it achieve for the team and how does it serve the larger story? Also, how could this move Alpha Flight forward? Those are all things I looked at when working on the one shot. And it’s been another dream come true!”

More at our source for this news at Marvel.com