Marvel’s Chaos War event continues to unfold. A one-shot shot spotlighting the Chaos King will be part of the fun. Chapter one takes in place among the mythological gods of Zenn-La, the home of Marvel’s Silver Surfer. Check out the below…

Every story has a villain, and this November, writer Brandon Montclare and artist Michael Kaluta give readers an introspective look at the one behind the Marvel Universe’s latest cosmic event in the over-sized one-shot CHAOS WAR: CHAOS KING.

As the battle rages between Hercules’ God Squad and The Chaos King’s legion of enslaved deities, Montclare and Kaluta’s special issue tells a three-part story exploring the motivations behind Mikaboshi as he makes his way to Earth intent on destroying everything in his path. However,
CHAOS WAR: CHAOS KING #1 black and white preview art by Michael Kaluta
Montclare points out that, like any good villain, The Chaos King really sees himself in the right. After all, what’s so bad about chaos anyway?

“He has a goal to return the universe to its original state-a preexisted chaos that he thinks is the right place for it to be,” explains the writer. “For him, he’s like, ‘Is chaos such a bad state?’ Nobody was conscious of all the strife that you have to put up with just to live another day; the noise and all the explosions and everything that it all goes through. He sees the universe as being created as disorder and [wants] it all to go back to when things were nice and quiet. No fighting, no death, no dying. It’s just one constant state where no one would ever have a care in the world.”

The first chapter of the story takes place in the heavens of Zenn-La, home of The Silver Surfer, where The Chaos King seeks to add the gods of that world to his growing army.

“The way we set up Zenn-La is pretty much keeping in how Zenn-La was set up as a culture, which is a mirror of Earth,” Montclare elaborates. “It’s a lot of different races. It’s a lot of different religions. It’s a technologically-advanced society. There is a lot of great action with the war of Mikaboshi’s army fighting the collective gods of Zenn-La, but it comes down to one god standing-Thrann. That’s kind of story one, where you have Mikaboshi confronting a science god.” 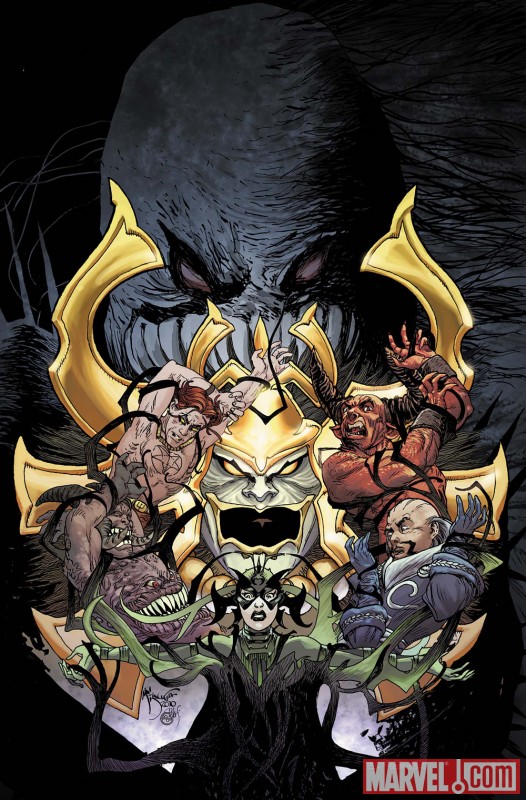