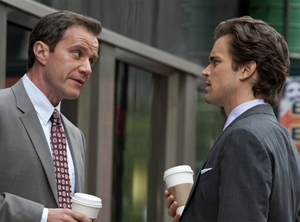 In the ongoing mystery of Kate’s death, Mozzie (Willie Garson) retrieves the FAA package with the flight recording from the apartment of Sara Ellis (Hilarie Burton) and brings it straight to Neal (Matt Bomer). Neal seems reluctant to open it and stashes it in a not so good hiding place. (He should have left it up to Mozzie. He knows how to hide stuff.) Sara realizes she’s been robbed, assumes Neal is responsible and proceeds to harass him for most of the episode, eventually recovering the package and having him arrested. However, after she listens to the flight recording with Kate’s last words, she decides to cooperate and gives the recording to Neal. Her motivation isn’t really spelled out. Is she intrigued by the mystery of Kate’s death? Did she feel sorry for Neal? Or did she just think he looked super hot without a shirt?

I must have missed the announcement that insurance investigators have authority to give anyone polygraph tests or get warrants or have people arrested or whatever. Aren’t they just private citizens like everybody else? I guess if you’re pretty enough you could get a lot of cooperation, but it takes a whole lot of chuztpa to march in to the FBI and demand to question anyone. Granted, Peter (Tim DeKay) seemed ready to tell her to take a hike and only capitulated because, as he later tells Elizabeth, Neal seemed to enjoy it. Still, maybe she should dial it back a notch. Ex-con men have civil rights too.

In the mystery of the week Peter and Neal uncover an adoption scam perpetrated by a sleazy lawyer with a gambling problem, Luke Donovan (John Larroquette). Of course, they have to catch him in the act, which involves Agents Barrigan and Jones going undercover as potential adoptive parents, Neal beating Donovan at poker and the Chechen mob. The moral of the story is don’t mess with Chechen kids and Chechen mob bosses simultaneously, but more importantly we learn that Mozzie was a foster child. I’m hoping that revelation will take on more significance at some future point.

I really like the White Collar guest stars this season, but they’ve outdone themselves this week with John Larroquette (Night Court, Boston Legal). Did anyone else love him in the Hallmark TV movie series McBride as much as I did? The role of Donovan (yes, that’s a shout out to Jeffrey Donovan of Burn Notice) is not exactly a big stretch for him, playing a lawyer yet again, but he does bring a lot of nuance to it and some really terrific line readings.

My first quibble? The poker game was kind of lame. Better than most fake TV poker games, but still kind of lame. With an obvious tell (the double eye blink) why didn’t Donovan get eliminated much sooner by Neal or one of the other players? And what’s with Donovan betting $20,000 on the turn after a $50,000 bet on the flop? No wonder the guy is $200,000 in the hole. Considering the hand, his position, his opponent and the game of poker in general, that bet was just all kinds of wrong.

Another quibble? Why didn’t Sara open that package before Mozzie had a chance to steal it? A mysterious package from the FAA and she just leaves it lying around unopened. She did claim that curiosity was her prominent character trait, didn’t she?

And my last quibble, I promise: as an expert in Brady-ology (and yes, I’m oddly proud of it) I’d like to set the record straight regarding Peter’s statement that “Carol Brady had an affair with Greg Brady.” Not so. According to Barry Williams (Greg Brady) he just dated Florence Henderson (Carol Brady)… once. He didn’t have an affair with her and, according to Florence, Barry was the only one who thought it was a date. He did sleep with TV sister Maureen McCormick (Marcia Brady), but that probably doesn’t surprise anyone. There’s no dark side to Carol Brady, although she did once kill a guy on Murder, She Wrote.

My favorite part? Diana and Jones going undercover as the happy couple looking to adopt was my favorite bit. (“Did I wake up in the Hamptons?”) I’d love to see more of these two, especially when they seem to be enjoying themselves so much. I also liked Mozzie stepping up and taking the initiative with a little breaking and entering all for Neal’s sake. That’s devotion. Yes, I’m all for supporting players getting quality screen time.

Another favorite part? The cinematography in the FBI scene when they’re discussing the sting, where they film through the glass and the images of the actors merge. That’s just beautiful and so is the wipe into the next scene with Neal and Mozzie.