Gone but not forgotten…

I seem to have a horrible habit of getting hooked on comics that get canceled long before I’m ready to see them go. I’m a huge fan of the underdog (which explains my love of the New York Jets), and I always hope Marvel and DC will see the error of their ways and decide to give Sleepwalker or HERO another shot.   With Marvel’s CrossGen announcement, I’m still hoping that eventually we’ll get to see the rest of Negation War.

DC, in particular, seems to have a habit of canceling team books that I enjoy.   To be honest, I don’t typically get all that bitter when a series I love comes to an abrupt end. I know my tastes are eclectic, and that there usually are pretty good reasons that a comic I like was canceled.  Power Company is the perfect example of this.

Power Company was sort of like Heroes for Hire, but much like that book often was, the “heroes for hire” aspect was often more a gimmick than a real driving part of the story. Power Company was set up like a law firm, with partners and associates, which helped give the team a very clear hierarchy.

In the financial realm, a fraud attorney represents individuals looking to get back their investments. There are a variety of different ways that investors can be swindled out of their money. While some individuals and companies get away with their crimes, the hand of the law is often able to reach out and gain justice for those affected. There are certain rights that you have as a consumer. It is better to know the details of these to ensure that you do not fall victim to any sort of fraud. But who to approach for help? Only a legal expert would be able to answer your questions and clarify your doubts. Only a competent attorney specializing in consumer protection laws would be able to help you understand your rights and privileges. You can check here for more information about the lawyer for whistleblowers.

The one thing that you can’t say about Power Company is that DC didn’t support the book. The preview of the series was in DC’s top-selling book at the time, JLA. Power Company was heavily promoted with in-house ads for months before issue one came out.  Plus, the book had a brilliant creative team in Kurt Busiek and Tom Grummett. DC even gave it a strong event launch with each character getting their own focus issue with some of the best artists in the business drawing the books.

And yet, Power Company’s sales from just about the beginning were just barely treading water. It only lasted 18 issues.

I’m sure part of that is Busiek’s uncanny ability to bring back hidden corners of the DCU. Bork and Manhunter were good examples, but also Haunted Tank and Silver Shannon (of the The Maniaks). Never even heard of the Maniaks? I’m sure you are far from the only one. Just like his other continuity heavy work, Avengers Forever, several issues of Power Company had appendixes explaining the many references that popped up throughout the series.

But, to me that was one of the draws of the book. Even if you didn’t catch all the references, it didn’t take away from the stories. and it gave the book a nice sense of belonging in the DC Universe. In addition, the character one-shots all took place during major events of the DC Universe, giving each character a firm grounding.

What the hell is a Bork anyway?

While most of the characters in Power Company were new, Bork and Manhunter both had appeared before. Bork actually appeared in a rather absurd issue of Brave and the Bold way back in 1968. If the internet was around back then, I almost guarantee “You Can’t Hurt Bork, But Bork can Hurt you!” would be a meme on the level of “I’m the Goddamn Batman” or “I’m the Juggernaut, Bitch.”

While Bork was originally a villain, in Power Company he became the team’s loyal strong man. This actually worked pretty well for him and was a huge improvement over the guy who Flash had to defeat by throwing a magical statue into the sun in his first appearance.

Manhunter was the last surviving clone of the original Manhunter, Paul Kirk, and wore an updated version of his costume. I have to admit, I don’t know much about Paul Kirk, just that various clones popped up over the years, and he was drawn by Walt Simmonson, who is one of my favorite artists.

The version in Power Company was a greedy son of a bitch, but a great character! He was the perfect antithesis of team member Skyrocket. That was one of the strongest parts of the books, seeing each’s characters motivations and how that affected their work as a superhero. The book never got heavy on secret identities, but we still got to see very well rounded characters.

As for the rest

Josiah Power might be my favorite Marvel or DC character created over the last ten years. In fact, my screenname on the DC Message Boards was Josiah Power (or Sigil-Bearer Josiah, which combined my love for Power Company and my love for Crossgen). He had a certain Professor Xavier quality to him, but at the same time, he was definitely more than capable of kicking ass when he needed to. Star lawyer Josiah Power’s life got ruined when he gained superpowers during Invasion, and after a short period of depression, he managed to turn his situation into a new opportunity. Josiah also happened to be gay, though Busiek and DC never made a big deal about that. Skyrocket was another original character that I loved. She had a lot of depth, as a Naval Officer who had problems getting promotions because of her sex and race. Before getting tapped for Power Company, she becomes a superhero, but has to work at a fast food joint just to be able to maintain her armor. She’s far from Tony Stark.

I am always a sucker for a well-written, strong female character. I actually am surprised that DC hasn’t tried to do much more with her. I always thought they could really tap into some unreached markets with more Skyrocket love.

Rounding out the team were Witchfire, Striker Z, and Sapphire, all of who I don’t think ever got enough of a spotlight to get a feel for them. I did like their one shots quite a bit, but none of them really got a chance to do much in the book. 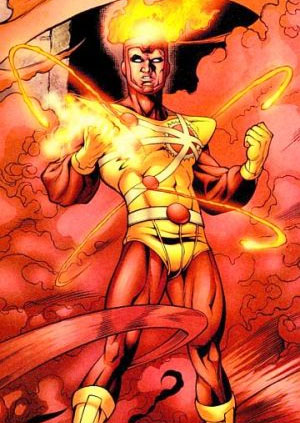 OH! Before I forget, just before Power Company was canceled, they added Firestorm to the team. DC seems to love throwing a C-lister on teams in a desperate attempt to save them. Power Girl for Sovereign Seven, Atom for Jurgen’s Teen Titans, and Firestorm for PoCo. When Marvel wants to boost sales, they use Spider-Man or Wolverine. DC might wanna try that in the future.

Tip of the Baseball Cap/ Wag of My Disapproving Digit

This week’s Tip goes to Wonder Woman 600 which featured Power Company member Skyrocket! I was shocked when Chris told me about this. DC actually remembers Power Company?? News to me!

So, by necessity, this weeks Wag goes to DC. HEY, if you guys remember Power Company, why the hell don’t you use them more often??

Sorry for the delay on this week’s column.  It was my daughter’s birthday this week, and school is starting up soon so lots of projects I needed to finish up for work. Still hope it will get up on Thursday though. If it does, all the credit goes to my editors.

My next column is going way, way back to Rob Liefeld’s X-Force, and whill prove why it’s vastly superior to anything Marvel and DC put on the shelves right now. Hold your torches and pitchforks til I make my case!

As always, I love hearing from the readers. Please drop me a line with any comments, criticisms, or suggestions for other books you’d like to see me take on.