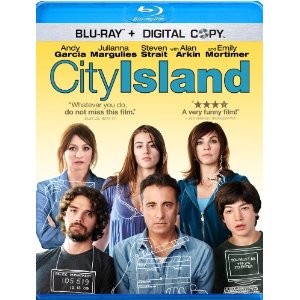 In a normal cinematic year, City Island would’ve garnered a staggered opening and enough word of mouth / critical buzz to become the next Little Miss Sunshine or Thank You For Smoking. But this hasn’t been a normal year in cinema and City Island never got the sort of wide release in theatres it should’ve. It is a shame because while it doesn’t reach the same heights in quality as those aforementioned films it’s still a good film in its own right.

Named after the remnants of a small fishing island in the Bronx, NY, that still is home to residents and fishermen alike, City Island follows a blue collar family with decidedly interesting problems. Frank (Andy Garcia) wants to be an actor and is embarrassed to tell anyone, making up a weekly poker game to cover up for his late night jaunts into the city for an acting class with an interesting teacher (Alan Arkin in an extended cameo). His wife (Julianne Marguiles) thinks he’s cheating on her and its driving her crazy. His daughter (Dominik Garcia-Lorido) has turned to exotic dancing to pay for her college career while his son (Ezra Miller) has a fetish for obese women.

When Frank meets his long lost son (Stephen Strait) from another woman at work (he’s incarcerated for drug possession) he throws a monkey wrench into his life by bringing him home to live with his family, the Rizzo clan is thrown into all sorts of upheaval. And in a lesser film, this would be wrapped up in melodrama leading to a big, weepy moment at the film. But Raymond De Felitta has a better idea: play it for the comedy that it could be.

Played as a farce, the film follows the clan as they try and hide an accumulation of secrets from one another. As the film progresses and the family try to continually conceal their lies from one another, De Felitta has a deft touch with the proceedings. Known for his work on the indie circuit, City Island is another in a line of films he’s done with good casts. And it might be his best so far.

De Felitta’s main ability as a director seems to be that he can get great lead performances out of great character actors. He got Peter Falk and Alan Reiser to work beautifully together and he gets the same out of Andy Garcia and Julianna Marguiles, whom the film revolves around. Adopting ridiculous Brooklyn accents, as does the rest of the cast, De Felitta has set out to make this as much of a farce as possible while still retaining some sort dignity to the proceedings. This isn’t a complete over the top farce, like Anchorman, but it strays towards that territory enough to keep the film’s inherent drama from being able to truly take effect.

And while the film has plenty of dramatic material to work with, De Felitta plays it for a farce enough that it takes away from it in the same way the comedy in The Thing About My Folks took away from the film’s inherent dramatic material. City Island follows that film in being a good, but not remarkable indie comedy.

Presented in a Dolby Digital surround in a widescreen presentation, City Island looks and sounds wonderfully. This is a beautifully shot film, taking in New York City with the scenery of City Island, and the DVD brings it out wonderfully.

There’s a Digital Copy of the film included.

Dinner with the Rizzos brings Garcia, Marguiles, Strait, Garcia-Lorido and De Felitta together to discuss the film and the setting. Garcia and Marguiles give stories about their own experiences with City Island as they dine on an Italian meal and drink wine. It’s an interesting, relaxed conversation between actors and their director about the film in an honest and frank manner.

City Island may not have found an audience in theatres but is perhaps better suited for the DVD market. A solid comedy that develops organically with a first rate cast, it’s a nice little film that aims for merely being a quirky indie comedy and ends up hitting most of the right notes.