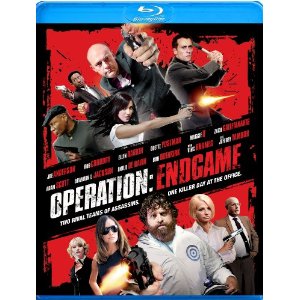 The most impressive thing about Operation: Endgame is that they managed to get a really fantastic cast: Rob Corddry, Ellen Barkin, Zach Galifianakis, Bob Odenkirk, Ving Rhames and Jeffery Tambor, amongst others. Sadly the bringing all this great talent together doesn’t necessarily make for a great film.

A man known only as The Fool (Joe Anderson) arrives for his first day on the job at a secret underground government facility where the country’s top spies work. (Each spy is given a codename based on a Tarot card.) Things quickly go wrong when the big boss, The Devil, (Jeffory Tambor) is killed and something called Operation: Endgame is initiated. The spy teams, separated into two feuding teams, have two hours to get out of the building before it is destroyed.

After a good thirty minute introduction, what follows is a series of fight scenes wherein the spies from opposing teams begin to kill each other one by one very creatively with office supplies (as real weapons are not allowed on the premises). The biggest flaw of the film is that most of the characters have zero character development whatsoever. The only characters given a glimpse of a back-story are The Fool and Temperance (Odette Yustman) who used to date a few years ago.

Despite the very superficial characters, many of the actors manage to provide entertaining performances none the less. Chariot (Rob Corddry) is particularly entertaining as the crass drunkard who just doesn’t care about anything anymore. Emilie de Ravin (Claire from Lost) is also very entertaining as Hierophant, a raving psychotic.

This is also the only film where you’ll get to see Zach Galifianakis kill a guy by throwing a pair of scissors into his eye. The Hangover may have been hilarious, but it didn’t offer that!

What little plot the film has to offer isn’t hard to follow and while the film attempts to set up some sort of twist ending it is really not to hard to figure out. It really is the performances from this ensemble cast that save the film from being utterly worthless.

Operation: Endgame is presented in anamorphic widescreen 2.40:1 and Dolby Digital 5.1 surround sound. The special effects aren’t super great, but the Blu-ray transfer looks pretty good. No complaints with the sound.

Behind The Scenes: (10 min.) A very unorganized group of behind the scenes clips. Not very interesting.

I’m not really sure who this film was made for. It seems to be shooting for the Smokin’ Aces crowd, but really pales in comparison to that film. If you like some decent comedy and some decent action as well as the actors involved, this might be worth renting. Otherwise I’d move onto something else.