Scott Pilgrim vs. The World Coming to DVD/Blu-ray on November 9 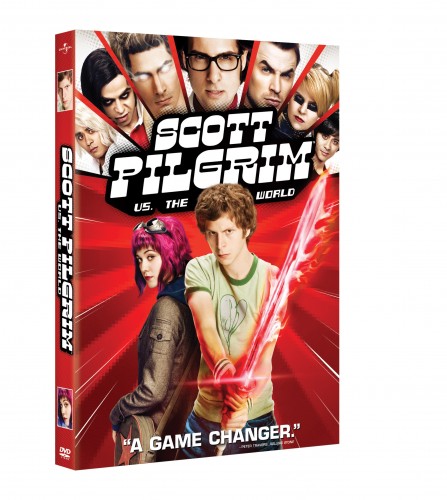 GET READY FOR THE GAME-CHANGING, ACTION-COMEDY

UNLIKE ANYTHING YOU’VE EVER SEEN BEFORE

SCOTT PILGRIM VS. THE WORLD

FOR A LIMITED TIME, BLU-RAY™ PURCHASERS CAN STREAM A BONUS MOVIE INSTANTLY TO THEIR TV WITH BD-LIVE™ OR SMARTPHONE VIA THE FREE POCKET BLU™ APP, NOW NEWLY ENHANCED FOR IPAD™

Universal City, California, Tuesday, September 21—Inventive visuals, endearing performances and a genre-smashing style define Scott Pilgrim vs. the World, the critically acclaimed, action-comedy coming to Blu-ray™ Combo Pack and DVD November 9th from Universal Studios Home Entertainment.  In the movie, cutting-edge filmmaker Edgar Wright (Hot Fuzz, Shaun of the Dead) directs Michael Cera (Juno, Superbad) and an incredible ensemble cast in the story of a charming, unemployed bass player who discovers that in order to date the girl of his dreams, he must first battle her seven super-powered, evil exes.

Both the Blu-ray™ and DVD come loaded with deleted scenes, laugh-out-loud bloopers and cast commentaries assembled by director, producer and co-writer Edgar Wright. The 2-disc Blu-ray™ Combo Pack is packed with hours of additional in-depth bonus features; a Blu-ray and DVD copy of film; and for a limited time only, a digital copy of the movie that can be viewed on an array of electronic and portable devices anytime, anywhere. Blu-ray ™ consumers will also be able to stream a free bonus movie instantly to any internet-connected player, Smartphone or iPad™ using the free pocket BLU™ app. Starting with Scott Pilgrim vs. the World, iPad™ owners can also enjoy a new, enhanced edition of pocket BLU™ made especially to take advantage of the tablet’s larger screen and high resolution display.  With this app, Blu-ray™ consumers will be able to stream their full-length bonus movie in a way that’s bigger and better than ever before.

Meet charming and jobless Scott Pilgrim (Michael Cera).  A bass guitarist for totally average garage band Sex Bob-omb, the 22-year-old has just met the girl of his dreams…literally.  The only catch to winning Ramona Flowers (Mary Elizabeth Winstead)?  Her seven evil exes are coming to kill him.  Genre-smashing filmmaker Edgar Wright (Hot Fuzz, Shaun of the Dead) tells the amazing story of one romantic slacker’s quest to power up with love in Scott Pilgrim vs. the World. Scott Pilgrim has never had a problem getting a girlfriend.  It’s getting rid of them that proves difficult.  From the girl who kicked his heart’s ass—and now is back in town—to the teenage distraction he’s trying to shake when Ramona rollerblades into his world, love hasn’t been easy.  He soon discovers, however, his new crush has the most unusual baggage of all: a nefarious league of exes controls her love life and will do whatever it takes to eliminate him as a suitor.  As Scott gets closer to Ramona, he must face an increasingly vicious rogues’ gallery from her past—from infamous skateboarders to vegan rock stars and fearsomely identical twins.  And if he hopes to win his true love, he must vanquish them all before it really is game over.

Straight from today’s Life section in USA Today comes the news that Scott Pilgrim vs. The World will be available to own on DVD and Blu-ray on November 9. The newspaper hints at extras that include deleted and alternate scenes, bloopers and commentary from the cast and director.

Bleeding Cool, on the other hand, obtained reports that the release will include the following extras:

Hopefully this is just the tip of the iceberg. I hope at the very least the DVD includes that wonderful Scott Pilgrim animation that ran on Cartoon Network around the time of the film’s release.

Here’s a scan of the newspaper article that includes your first look at the DVD cover art: 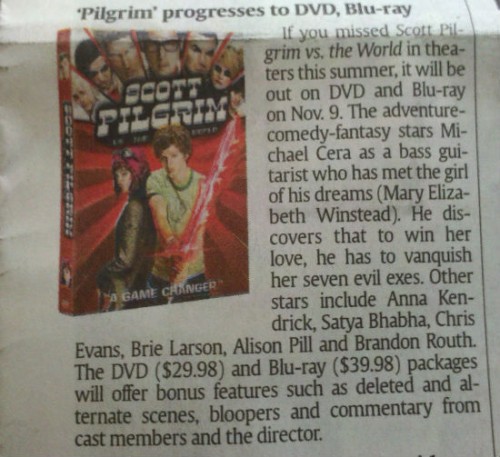