Liquid City is an anthology book featuring work predominantly done by artists and cartoonists of South Asian background.  The first book was an interesting mix (you can read my review of it here) that introduced me to some interesting creators.  My favourite part of the book was Sonny Liew’s Malinky Robot.  Liew is the editor of the book as well.

The solicitation makes mention of countries like Malaysia, Vietnam, and South Korea; all of which are countries with comics cultures I know very little about.  I can see how a book like this has a limited appeal in the wider market, but that is exactly what draws me to it.  I love seeing how comics are interpreted and put to use in other places, and like looking for the next ‘big thing’ that may come along.

I think American Vampire is the best new series Vertigo has launched in the last year.  I know that there is a glut of vampire books on the stand right now (and for the last decade), but this one is unique.

Central to the concept is the notion that vampires from America are different from their European progenitors.  They don’t need to fear the sunlight, and are affected by different materials.

What also makes this book unique is the involvement of Stephen King, a move which is sure to attract a number of readers who don’t normally read comics.  What they are going to find out though, is that Scott Snyder’s story is more compelling.

When this book was published in monthly format (I’m not sure how they’re going to handle that in the hardcover), Snyder wrote the lead story, set in 1920s Hollywood, and centred on Pearl, a young woman hoping to break into stardom.  She is fed on by a group of European vampires who have created a base of power in the New World.  She is saved by Skinner Sweet, the first ‘American Vampire’, who turns her, and then turns her loose for revenge.

Skinner’s backstory is told by King.  He was a crook and murderer in the late 19th Century West, when he crossed paths with the same vampires who later attacked Pearl.  His story is tied to a couple of lawmen, and is pretty interesting.

As much as King brings the book star power, it is Rafael Albuquerque who ends up contributing the most to the book’s success.  His art in this thing is incredible.  American Vampire is well-worth checking out. 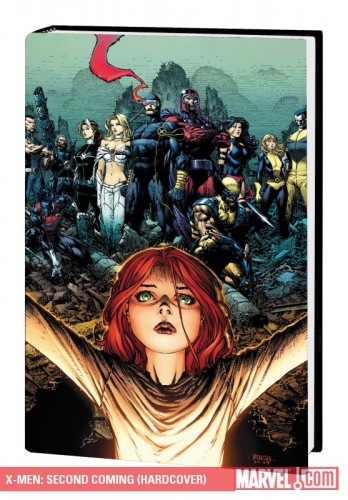 Think back – when is the last time you read an X-Men crossover that was actually good?  Messiah Complex was okay, but before that, I’d argue you have to go back to the Mutant Massacre, and even it had its flaws.  When I think of ‘mutant crossovers’, I’m more likely to think of horrendous displays of excess and poor editorial coordination like X-Cutioner’s Song, the Fall of the Mutants, or Operation: Zero Tolerance.

With Second Coming, Marvel finally gets it right.  The story flows naturally from one chapter to the next, and the story stays consistent.  The same can’t always be said for the art, and I feel I should warn potential readers that Greg Land did, unfortunately, contribute to this book.

The story involves the return of Hope, the ‘messiah baby’ that Cable has been wandering around the future with for a year or so.  It also involves the culmination of just about every plotline from X-Force that involved the return of Bastion and his resurrection of a number of different X-villains.

There are more than a few mutant deaths in this book.  Some are random, some are meaningful and story-driven, while at least one is just sensationalistic and will be reversed any day now.  This hardcover collects 14 different comics.

I seem to write a lot on this site about the Farscape comics at Boom, although I don’t know anyone who’s ever mentioned having read them.  I kind of wonder what type of numbers these comics do – apparently enough to demand a spin-off title, but I’m a little surprised by that.

Anyway, my thoughts on these books are that if you liked the TV show, you’ll like this book on some level.  If you never watched the show, I don’t think there would be any point in picking this thing up; it wouldn’t make a lot of sense.  Of course, this series doesn’t really stand on its own without knowing about what’s currently going on in the main Farscape title, but it’s still pretty good.

I just recently read the comics that make up this trade.  My review for it is here.

Here’s another book that I just read recently that seems to be getting a new printing.  My copy was published by First Second, but this one is coming out from Square Fish, which I’ve never heard of before.

This would be an interesting companion to read alongside American Vampire.  Both examine the ways in which a New World vamp would be different from a European specimen, although in a very different way.

I found this book to be a lot of fun, as it reads like a mash-up of Twilight and Clerks, with wonderful Warren Pleece artwork.  My original review of it is here.