After reading Soldier Zero #1 this week, it felt necessary to go back and review the recent Superior #1 at the same time.  Both of these books are examples of superhero titles that are well executed artistically and in a written sense.  No corners were cut in production and the creative teams are high quality in every sense.  Yet, there’s really no need to pick up either one.  Both are devoid of anything new to say on the subject of superheroes.  You’ve essentially read both of this comics…quite a few times all ready.

I absolutely adore superhero comic books.  It’s pretty hard to read comics unless you are a fan of storytelling that includes capes and tights.  The thing is, I tend to read a lot of older superhero comic books.  Stories with new characters rarely have anything new to bring to the table, so why not stick to the classics.  Well crafted unoriginality seems to be the standard with both of these titles.

Stan Lee was involved in the workup of the character, but it’s very hard to tell just how much so. Paul Cornell gives us a fluid script that’s a pretty by-the-numbers modern introductory tale.  Meaning, not too much happens in the first issue.  The story fits the mold of classic Stan Lee creations of yore without being singular or eye catching in anyway.  The first issue introduces, Stewart, our wheelchair bound lead, who’s not just about to be a superhero, but he’s a real hero having been disabled in the Afghan conflict.

The ramifications of combat on people as they are sent home to pick up the pieces can make for compelling storytelling.  Stewart speaks out against the war but is also an astronomy lecturer at a major metropolitan university, or something like that.  The best piece is subplot with a burgeoning romance with a woman named Lily that leads to a rooftop encounter during a meteor shower.  Cornell crafts some excellent nervous chatter with Lily and her friend, Kaylee, before the big “date.”  This dialogue is great because it’s very similar to the chats I’ve had with a friend before a first date, except I’ve never had to discuss the etiquette of dating a person who is handicapped.  It’s really smartly written.

Unfortunately the super hero stuff is straight up rehash of everything that’s ever happened before.  The story actually begins with Soldier Zero fighting in space.  His confrontation is interspersed with the planet side drama.  He finally crashes, literally, on top of Stewart and Lily.  Then he up and dies and transfers the power of Soldier Zero to Stewart.

Now why did you go and ruin the interesting drama with this hackneyed cliché?

There’s nothing compelling at all in design, origin, or purpose with Soldier Zero.  The look of the character is bland and unoriginal.  The title character looks like a cross between Iron Man and Diehard (from Youngblood).  The origin is Green Lantern with a touch of Jake Sully from Avatar mixed in.  Considering how blah Soldier Zero looks Javier Pina does an excellent job artistically.  The story is well laid out and there is plenty to look at on each page.

It’s a serviceable comic, but nothing makes me want to read issue #2. 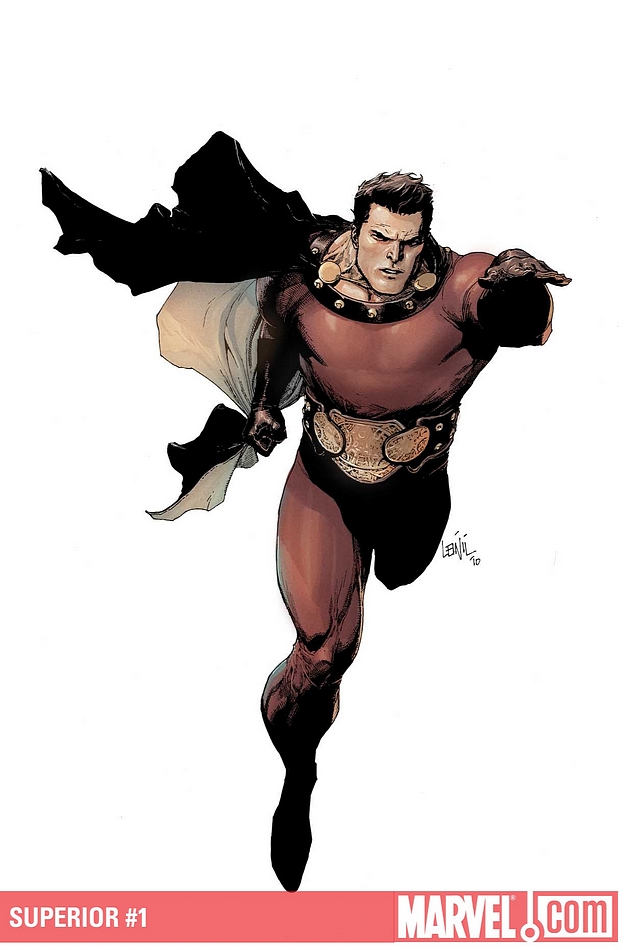 Mark Millar is a writer that can be polarizing.  I tend to enjoy most of his output, but every now and then I feel Millar misses the mark totally.  This is one of those times.

Millar has told some excellent superhero stories using Marvel and DC characters.  His best work at the Big Two usually involves placing an iconic character in an intense situation you haven’t really seen before.  Old Man Logan, Superman: Red Son, and Wolverine: Enemy of the State are epic tales that definitely have a freshly spun story.

Millar’s creator owned material usually riffs on concepts we’ve seen time and again, but does it in an innovative fashion.  Kick Ass is probably my favorite of this type of work because it’s one of the best stories involving a “real world” and what would happen to people that tried to be superheroes in it.  I wasn’t a big fan of Wanted, but its idea of villains without heroes was neatly contrived.  I’ve only read one issue of Nemesis, but the conceit of Batman being a monstrous jerk (wait that’s not original) and using his powers for evil is well executed.

Superior on the other hand is probably the weakest Millar book ever written.  I don’t know if Mark is aware of a little publisher named Fawcett Comics that competed with DC for readership supremacy back in the ‘40s, but it’s not like DC hasn’t been randomly publishing adventures featuring the Marvel family for the past 30 odd years.

Superior features a teenager stricken with Multiple Sclerosis facing the hardships of life.  For some reason, a “space monkey” (don’t ask me) comes down and makes him Superior, who is actually an pop culture character in Simon’s world.  I can imagine a few interesting future stories featuring the evil corporate bosses trying to sue Simon for copyright infringement.  Other than that the idea of Simon turning into man-sized superhero is at its core just Captain Marvel (Shazam for those with no clue).  The whole handicapped aspect was dealt with through Cap’s sidekick Captain Marvel, Jr.

Riffing on Superman is fine, done to death, but fine if you have something original to say.  I can’t understand why you’d basically go out and take the world of Captain Marvel and call it your spin on Superman.

Lenil Yu, like Javier Pina on Soldier Zero, does a good month’s work penciling the comic.  Again the book is well crafted but Superior’s design does not pop off the page at all.  It’s Superman in all red with a wrestling championship belt around his waist.  There’s nothing vaguely memorable at all.

Neither concept looks to be one that’s going to be read seven decades after its initial creation.  Both do show sparks that they may improve with some time, but I can’t recommend either one.