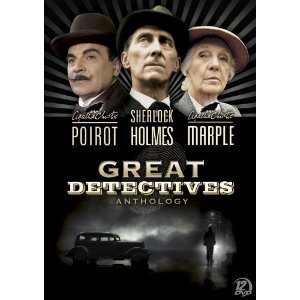 The five Hercule Poirot cases are from his ITV series starring David Suchet. Poirot is a Belgian detective globetrotter who can easily sniff out trouble from under his waxed mustache. He often finds himself mingling with British citizens which are amazed by his powers of deduction. “Death On the Nile” is a Jerry Springer level honeymoon. Turns out the richest woman in London has married her best friend’s fiance. The friend isn’t being the quiet and reserved British woman. She’s stalking them after the nuptials. They all board a ship for a cruise down the Nile River. Somebody dies and it’s up to Poirot to uncover the killer. Trouble is the killer isn’t happy with just one hit. There’s more bodies piling up than a pyramid builder’s wrap party. “The Mystery of the Blue Train” proves once more that trains are dangerous if Poirot buys a ticket (see Murder on the Orient Express). This time a train full of the posh set takes in the French Riveria. One socialite drags along her doggish husband and her lover. That’s a natural formula for homicide.

“Taken at the Flood” places a newly rich widow against her late husband’s family. They don’t like being left out of the will. The plot to get their hands on the inheritance involves proving she’d never divorced her first husband. She claims innocence, but things get messy when the man who was supposed to be her first husband turns up dead. She needs the help of Poirot to prove she’s not a two time widow. “After the Funeral” is another dead rich guy tale. This time the deceased widow swears her brother was murdered. She hires Poirot to uncover the murder. The twist comes when his first proof of a murderer on the loose is when the sister turns up dead. “Cards on the Table” has a wealthy man invite Poirot and three other sleuths over to his house for dinner. Things are going great until the host turns up dead. Is one of the sleuths really a killer? Will innocent three be able to expose the perfect crime?

Christie’s Miss Marple was the sweet elderly spinster who had a knack for solving crimes. Who could expect her to out think the police detectives? She was a pioneer for Murder She Wrote. Joan Hickson starred in the BBC production that adapted all 12 of the Miss Marple novels. Only 8 of them are in the Great Detectives collection. “The Moving Finger” keeps things civil as Miss Marple investigates what wicked person or persons is writing nasty letters around a town to stir up trouble. “At the Bertram’s Hotel” stirs up suspicions in Miss Marple when she visits the place. Is something really wrong at the place? “Murder at the Vicarage” brings out the body when a Colonel turns up dead in a small town. Way too many people hated the guy. Could the entire town have killed him as a community service project? “Nemesis” drags Miss Marple into doing a favor for a deceased friend. It’s a fine blind trail mystery.

“A Caribbean Mystery” reminds us why you should never vacation near a sleuth. Crime can’t avoid them no matter how nice it is outside. “The Mirror Crack’d from Side to Side” brings Hollywood to Miss Marple’s small town. Turns out somebody wants the star dead. “Sleeping Murder” gives a seaside ghost story. A woman swears her dead stepmother is haunting them. Although the stepmom had run away years before. Miss Marple choose between being an exorcist or sleuth. “4:50 From Paddington” shocks Miss Marple when she witnesses a murder in a passing train. Did she really see a homicide or it just her imagination? Does feel like a cover up.

Hammer superstar Peter Cushing once more returns to the role of Sherlock Holmes. He’d done Hammer’s version of The Hound of the Baskervilles. He does quite well the second time around with the same case. Nigel Stock serves as Dr. Watson. The BBC production sticks close to the original book. Holmes and Dr. Watson are hired to protect the heir of the Baskervilles from the mythical hound that kills the relatives. It’s a family canine curse. The film doesn’t get overly atmospheric on the limited TV budget. There’s not too much fog in the moors. It’s just not nearly as creepy as the numerous Hound films including Cushing’s earlier version. But what they lack in production, it more than made up with the ideal pairing of Cushing and Stock. The duo inhabit the characters and not merely dress up like trick or treaters. They exude their own fog.

The other four episodes are condensed versions of stories written by Doyle. “The Blue Carbuncle” is a jewel and not a horrible skin disease. The valuable gem is stolen and turns up inside a Christmas goose. It’s up to Holmes and Watson to figure out how such a priceless wonder ended up as a surprise. “A Study in Scarlet” tangles Holmes into murders that lead back to the Mormon community in Salt Lake City. This could be a prequel to Big Love. “The Boscombe Valley Mystery” traces a victim’s death back to his day in Australia. He’s been knocked dead with an old rock. His son is busted as the suspect, but the dead guy’s girlfriend wants Holmes to find the real killer. “The Sign of the Four” involves a woman receiving a pearl every year after the disappearance of her father. She hires Holmes to figure out why she gets these valuables. The case involves a boat chase that has an Indian firing poison darts at Holmes.

Great Detectives Anthology packages together a trio of good English centered crime mysteries. Sherlock Holmes, Miss Marple and Hercule Poirot keep the audience guessing as they pick through the suspects and their alibis. The action depends more on the actors than the dazzling camerawork and editing. All three leading actors do fine jobs becoming the iconic figures instead of merely trick or treating on the screen. The mysteries do stick rather close to the novels so you can use them as Cliff’s Notes.

The video is 1.33:1 full frame. Sherlock Holmes and Miss Marple were shot using the BBC’s mix of 16mm for location work and videotape for studio scenes. Hercule Poirot looks much sharper without any media change during the film. It was shot only a few years ago. The audio is Dolby Digital Stereo. Because the video segments had to be shot live onto tape, there are moments when the microphones aren’t quite near the speakers. The levels are fine for the elementary deduction moments. The Piorot episodes have superior sound thanks to better technology.

Sherlock Holmes The Great Detective (46:14) is an A&E Biography hosted by Jack Perkins. For a viewer interested in the character, this special gives a through background using clips from various movies and TV shows featuring Holmes. There’s plenty of experts giving background on the books and his impact. Vintage footage has Doyle discuss his creation.

Index of Stories are given for Miss Marple and Hercule Poirot.

Great Detectives Anthology is a good boxset for the Anglophile sleuth in your family. These are proper who done it mysteries with the detective working through the various suspects without too much visual fireworks. There’s more deduction than gunplay and car cashes on the screen. The films don’t attempt to over modernize the source material . The films resemble reading the books which is good if you’re their for the mystery and not to be overwhelmed by the sizzle.