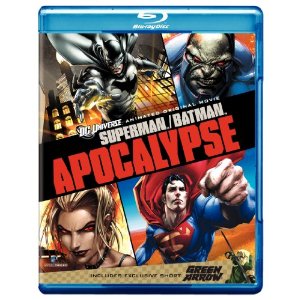 To be honest, my hopes were not terribly high that DC’s new animated feature Superman/Batman: Apocalypse was going to be very good. A sequel of sorts to the recent Superman/Batman: Public Enemies, both films are adaptations of graphic novels by writer Jeph Loeb, a fan favorite known for creating whirlwinds of pulpy entertainment by throwing as many enemies as possible at the heroes featured in his books. Unfortunately, while Public Enemies was engrossing on the page, the film version felt slight in comparison, and while the movie was not at a loss for action, the battles depicted onscreen were lacking matched up against the fights seen in previous DC animated adventures, most notably those presented in the TV series Justice League Unlimited. With the source material for Superman/Batman: Apocalypse generally considered a step down from that of Public Enemies, expectations were low that the new picture would rise above its predecessor. Thankfully though, this notion was completely wrong.

While not perfect by any means, once the film really starts to hit its stride Superman/Batman: Apocalypse becomes an increasingly exciting adventure, filled with intrigue and epic fight scenes worthy of the characters in this story. Though it would be easy to dismiss the film early on due to a slow start, this is a movie that completely brings home the goods in its second and third act. With one terrific fight after another, some even featuring Darkseid, the most malevolent of all DC villains, Superman/Batman: Apocalypse becomes a movie that earns its place near the top of the movies that Producer Bruce Timm and the DC Animation team have produced in the last few years.

Again though, where the film may throw you off is at its very beginning, namely because much of the early portion of the movie focuses not on the title characters of the picture, but on the character of Kara Zor-El, AKA Supergirl, portrayed by Summer Glau. Arriving on Earth under mysterious circumstances, the movie grinds to a halt at times as we see Clark Kent (Tim Daly) trying to acclimate the Kryptonian to her new surroundings. This would include ridiculous scenes where Superman is out shopping for outfits with his young cousin in an extremely odd sequence that just isn’t over soon enough.

Luckily, before the film goes off the rails, we find out that Darkseid (Andre Braugher) is in pursuit of a new captain for his honor guard, with his sights set on molding the young Kara into his ultimate dog of war. This sets off a series of clashes between Superman, Batman (Kevin Conroy), Wonder Woman (Susan Eisenberg), and the Amazonian soldiers of Paradise Island versus the hordes of Darkseid’s Apokolips. Whether the forces of good skirmish with hundreds of Doomsday monsters, giant creatures from another world or against Darkseid himself, the movie is on its best footing when fists are flying for the very soul of Supergirl.

Those worried that the fights in this film may disappoint the way the combat in Superman/Batman: Public Enemies managed to can put those fears to rest. The action is gigantic in scope, with moments of terrific invention keeping you on the edge of your seat. Seeing Superman battle an army of Doomsday monsters without holding back any of his strength or powers is enormously entertaining, as is seeing Batman matching wits with Darkseid for the fate of the universe, instead of just going toe to toe with him. The movie is also capped with a fight that involves Superman using his fists so fast that they actually create a tornado that envelopes the Man of Steel and his opponent, making anything in Public Enemies seem paltry by comparison.

Superman/Batman: Apocalypse isn’t the best of these recent DC Animated features, but it’s also far from the worst. Terrifically entertaining and packed with great voice-work and visceral combat, this is a great way to follow up Public Enemies and correct a lot of the mistakes that film ended up making. For fans looking for epic fights and a strong outing from the DC animation team, Apocalypse is a terrific way to go if you’re tired of pulling out you Justice League Unlimited episodes or Green Lantern: First Flight again and again.

Superman/Batman: Apocalypse looks phenomenal on this Blu-ray print, especially for a 2D animated film. The colors in the film absolutely pop and the clarity of the image is phenomenal throughout the movie. The sound is also quite nice, especially when filling up your surround sound with the thundering sounds of Superman and Darkseid battling it out.

DC Showcase Presents: Green Arrow – A shortfilm from the team that brought you the awesome Spectre and Jonah Hex shorts on previous releases, this one feels slighter, but is still a ton of fun due to some terrific action as Green Arrow stumbles onto an assassination plot at an airport and has to take out a ton of bad guys in order to save the life of a newly ascendant queen of a small nation. This is sort of like a 10 minute version of Die Hard 2 starring Neal McDonough’s Green Arrow instead of John McClane. If that sounds appealing (and it should), this is for you.

The Fourth World: The New Gods –This is probably everything you could probably ever need to know about the inception and history of Jack Kirby’s fourth world and the war between New Genesis and Apokolips. Showcasing the brilliance of Jack Kirby, this goes through the evolution of all of the main characters involved in this saga and how those characters fit into the DC Universe today. Knowing some about this portion of the DCU, but not nearly enough, this is an invaluable little piece that should interest comic and Kirby fans alike.

New Gods Profile: Mr. Miracle – This goes about five minutes and covers the origins and motivations for Mr. Miracle, the son of New Genesis Leader Highfather, who was part of a treaty with Apokolips and given to Darkseid in exchange for the villain’s son, Orion. Mr. Miracle is a terrific character with a rich history, and this pretty much gives you the rundown of what this character is all about.

New Gods Profile: Orion –Orion is an amazing DC character; the son of Darkseid, given over to New Genesis and Highfather in the treaty that brought Mr. Miracle to Apokolips. A man possessing the fury of Darkseid but brought up on the civilized world of New Genesis, we learn of the complicated relationship between Orion and Darkseid and how deep down Orion may be the greatest threat to Apokolips and its way of life.

Supergirl: The Last Daughter of Krypton – This may have originally been produced for a Smallville box set, but it’s still a tremendous little mini-doc on Supergirl, her origins and the evolution of the character over the years. We get interviews from DC creators and actresses who have played the role over the years, and we even get to hear how the character has helped change the role of female superheroes throughout the decades since her origin in 1959.

Sneak Peek: All-Star Superman – This is basically a 10 minute teaser for the upcoming DC Animated movie All-Star Superman, which is based on the amazing graphic novels by author Grant Morrison and artist Frank Quitely. Probably the best Superman comic book to hit shelves in over a decade, this adaptation by the DC Animation team has a lot to live up to. Hopefully, All-Star Superman can rise to the challenge.

Bruce Timm Presents Four Bonus Episodes Featuring Darkseid – These are from Superman: The Animated Series and are all pretty much fantastic. If there’s a flaw in having these episodes on the disc, it’s that it makes me long for the days when Michael Ironside voiced Darkseid.

If you love these DC Animation movies, then Superman/Batman: Apocalypse is a pretty satisfying one. Hearing Kevin Conroy and Tim Daly as the Dark Knight and the Man of Steel is usually enough to get me to watch one of these adventures, but the added bonus of epic action featuring Darkseid puts this one over the top. Plus, there’s tons of features here, making this a no-brainer.