What the World Was Watching: WCW Monday Nitro – November 6, 1995 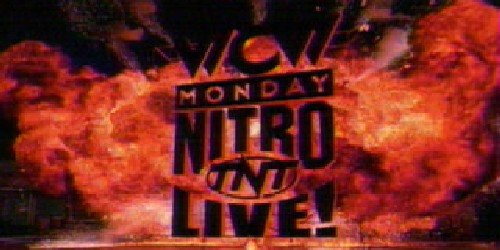 -Eric Bischoff, Steve â€œMongoâ€ McMichael, and Bobby â€œthe Brainâ€ Heenan are in the booth and are coming to us live from Jacksonville, Florida.

-Call 1-900-370-3WCW to vote for who will fight in tonightâ€™s main event. It costs 99 cents per call! You have to choose someone from the â€œredâ€ and â€œblueâ€ locker room (rosters included below).

So did Cobra get in line first at the end of last weekâ€™s show to fight the Giant for the title? So much for making that a big angle for this weekâ€™s show. The Giant lifts ring announcer Dave Penzer into the air and forces him to call the match a WCW title match. We still donâ€™t get an explanation for why the Giant thinks heâ€™s the world champion and the Giant chokeslams Cobra and pins him in 17 seconds. Iâ€™m not even going to bother to rate this for obvious reasons.

-â€œMeanâ€ Gene Okerlund is in the â€œredâ€ locker room where fans can vote for the Shark, Scott Norton, Diamond Dallas Page, â€œNature Boyâ€ Ric Flair, the Blue Bloods, or Big Bubba Rogers. The Shark and Scott Norton have to be separated because they still have a problem after last weekâ€™s match.

-Tony Schiavone is in the â€œblueâ€ locker room with Johnny B. Badd, the Nasty Boys, Alex Wright, Sting, Dave Sullivan, Mr. JL, and Hacksaw Jim Duggan. Sting demands that fans vote for he and Flair to face off while Duggan throws things around like an idiot.

-Hulk Hogan and Randy Savage are in Venice Beach, California and hanging out with a homeless bum while some random guy plays on an electric guitar. Hogan tells Savage to stick with him and Savage tells Hogan to fight for the dark side and that he will go to WCW and find out whoâ€™s friend and foe. The homeless guy makes random noises during the segment. What in the holy hell was this?!?!

The Renegade does his Ultimate Warrior impression by running to the ring, shoulder blocking Sullivan, and clotheslining him to the floor. Why no disqualification? The over the top rule must only apply on WCW Saturday Night. Outside, Sullivan atomic drops the Renegade onto the guardrail and clotheslines him off. Sullivan takes the Renegade to the steps and we head back inside, where Sullivan slowly beats on him in the corner. A slingshot somersault splash from the apron hits knees and the Renegade gets a messy powerslam off the ropes. The Renegade hits a springboard elbow smash in the corner, but the Renegade ties himself in a Tree of Woe on a blind charge and Sullivan splashes him against the buckles. A double stomp off the second rope finishes at 2:45. After the match, Jimmy Hart throws water in the Renegadeâ€™s face and rubs off his face paint. Hart then tells the Renegade that his career is overâ€¦which is chilling when you consider that the Renegade committed suicide years later because his career went downhill so fast. Grade: D

-The lights go off in the red locker room and Iâ€™m surprised Okerlund didnâ€™t start cursing. Flair makes fun of the situation by saying the lighting going out was an act of God and he demands to be put in the main event tonight.

Benoit tears into Guerrero to start, hits a sick snap suplex, and gets a ton of velocity on a side suplex. Benoit locks in a Liontamer as a Japanese contingent with Sonny Ono is shown eating. Members of the delegation include Masa Chono and Jushin â€œThunderâ€ Liger. When the camera cuts back to the ring, Guerrero gets a tilt-a-whirl sidewalk slam and gets an elbow off the ropes. When Benoit bails, Guerrero delivers a flying body press onto him from the top rope. Bischoff would rather talk about the stupid Hogan vignette than call the match, though. Guerrero goes to the top rope, but Benoit catches up to him and hits a superduperplex for a double KO spot. Benoit then slowly covers for two. Benoit hits a devastating powerbomb for two. Benoit hits a short-arm clothesline but Guerrero gets a victory roll off the ropes for two. Benoit mustâ€™ve watched Guerreroâ€™s match with Craig Pittman from last weekâ€™s show. Benoit goes for a kneelift off the ropes, but Guerrero counters with a fluke schoolboy for two. Benoit hits a German suplex for two. Benoit goes for another and when Guerrero tries to get out with a punch, Benoit ducks and hits a Northern lights suplex for two. Benoit goes for a full nelson German suplex, but Guerrero knows whatâ€™s coming from their previous encounter and gets in the ropes. Benoit suplexes Guerrero onto the top rope, but Guerrero blocks being suplexed back inside. A slugfest ensues to wake up the crowd and when Benoit goes to suplex Guerrero into the ring, Guerrero falls on top of him for the pin at 6:28. Benoit actually got his foot on the bottom rope at one, but the referee didnâ€™t see it and wonâ€™t restart the match, which irritates a few fans at ringside. Stupid finish aside, I liked the psychology that was being employed in this match to build off of their previous encounters. Grade: B-

-Sting still begs to face Flair tonight and the Nastyâ€™s just say â€œwhatever he saidâ€ when talking about the Blue Bloods. I feel like Iâ€™m watching a slimmed down version of the 1993 Battlebowl pay-per-view as they show the face and heel locker rooms throughout the show.

-Bischoff informs us that Sting vs. Ric Flair has been voted as our match tonight. Well thatâ€™s about as surprising as seeing the sun come up every morning.

Thereâ€™s no robe for Flair, so either he had to pawn it before the show, Flair means business, or both. Sting tears into Flair before he gets into the ring and runs through his power offense. Outside, Sting takes Flair to the guardrail and then doesnâ€™t sell Flairâ€™s chops. Flair begs off to no avail and Sting takes him to the guardrail a second time. Flairâ€™s head must be made of steel because he doesnâ€™t sell that, eye rakes Sting, and suplexes him. As Flair tries to recover, Sting tries to give him a Stinger splash against the guardrail, but Flair moves and Sting eats the steel as we go to a commercial break.

When we return, Flair is pounding away. Flair locks in the figure-four without any setup and uses the ropes for leverage to get a couple of near-falls. Sting rallies with the help of the crowd and reverses the figure-four. Sting doesnâ€™t sell Flairâ€™s offense and Flair tries to get off, but Sting doesnâ€™t buy into it. Sting gives Flair a gorilla press slam and a dropkick before Flair goes to the eyes and tosses Sting to the floor. Flair delivers an axe handle off the apron, chops away, and goes back to the eyes, which might be the most effective strategy because Sting isnâ€™t selling anything else. Flair grabs a chair and runs at Sting, but the referee takes it away from him. That was great because other fans tried to reach out and take the chair away from Flair as he ran. Back in, Flair decks Sting and uses the ropes to get four two-counts. Sting bridges out of another near-fall and gets a backslide for two. Sting slams Flair off the top rope and unloads in the corner. When the referee gets between them, Sting carries him to the opposite corner, but that allows Flair the time to pull out a foreign object and he blasts Sting with it when he gets near him. Flair taunts and drops an elbow drop, but it only gets two. Flair chops Sting off the ropes, but Sting doesnâ€™t sell it and he doesnâ€™t sell Flairâ€™s punches. Sting gorilla press slams Flair off the ropes and delivers a superduperplex. Sting applies the Scorpion Deathlock and that gets the submission at 9:16 shown. This was much better than their match on the first Nitro, but if you donâ€™t continually work the back or the legs I canâ€™t buy into the Scorpion Deathlock as the finish. After the bell, Sting refuses to release the hold as Bischoff wonders whatâ€™s wrong with Sting. I dunno Eric, maybe heâ€™s mad that Flair made him look like a fool at the last pay-per-view. Several referees try to get Sting to break the hold and Mr. JL, Eddie Guerrero, and Dave Sullivan come out but they have no effect. Eventually, Johnny B. Badd and Hacksaw Jim Duggan succeed in getting Sting off of Flair but he runs back into the ring and reapplies the hold. Lex Luger comes out, after getting past security, and he convinces Sting to break the hold. Grade: B

-â€œMeanâ€ Gene Okerlund interviews The Giant, Jimmy Hart, and Kevin Sullivan. Hart finally clarifies why the Giant is calling himself the WCW champion. Evidently Hart had Hoganâ€™s power of attorney and he signed the contract for his match with the Giant at Halloween Havoc. The contract stipulated that if Hogan was disqualified during the match that he would lose the WCW Championship and thatâ€™s what happened so the Giant is the new world champion. Now that makes sense so WHY did we not get this explanation THE NIGHT AFTER the pay-per-view. Weâ€™re not done yet, though, as WCW attorney Nick Lambrose comes out and says that Hart is partially correct because Hogan is no longer champion. He reads a statement from Commissioner Nick Bockwinkel says that because of the dubious means of the disqualification at Halloween Havoc, the WCW World title is being held up and will be awarded to the winner of the three ring, 60 man battle royal at World War 3. The Giant refuses to relinquish the World title until Sullivan takes it off of him and says that the Giant win the battle royal at World War 3. Thanks to the mic skills of Jimmy Hart this segment came off really well.

-Tune in next week to see Randy Savage face off with Meng, Eddie Guerrero fight Johnny B. Badd, and Sting squares off with Dean Malenko!

The Final Report Card: I still think it would have made more sense to have the reasoning behind why the Giant was carrying around the title clarified on last weekâ€™s show and then have the announcement about World War 3 take place on this show. WCW was also doing a weird tweener angle with Luger during this time period, which will grow more complex and confusing in the coming months. Despite that, the last half of this show is fantastic as Eddie Guerrero, Chris Benoit, Sting, and Ric Flair deliver as usual. I just hope next week theme isnâ€™t â€œletâ€™s bury the cruiserweights to the heavyweights.â€

Blu-ray Review: The House of the Lost on the Cape