Boardwalk Empire and The Big C are both shows that I download, so I don’t always get to watch them right away. They’re also both shows that took a while to grab me, but now I’m really enjoying them. 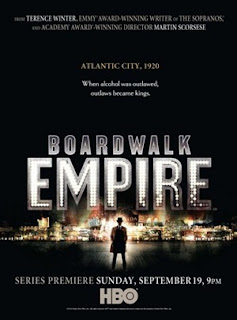 Boardwalk Empire got me a few episodes ago. For the first several episodes I was a little bored, but now I’m really interested in the relationship between Nucky Thompson and Margaret Schroeder. This week Nucky’s brother was shot while Nucky was in Chicago, which means that they’re losing control of Atlantic City. This will certainly get interesting, and I’m glad that Nucky will be bringing Jimmy back to Atlantic City. So far, my main complaint about this show is that there are too many characters without connections to one another. The setting flips back and forth a lot from Atlantic City to Chicago to New York, and it sometimes feels like the series lacks a center.

The plot development I’m most excited about though, is within Nucky’s relationship with Margaret. He asked her to go wait in his office and hide his ledger book, which shows that he trusts her. But she looked at it, so maybe he shouldn’t. Now that she’s seen all the money he’s bringing in from selling booze, what will she do? S far he’s been good to her and her children. It would be to her advantage to turn a blind eye. Will she? 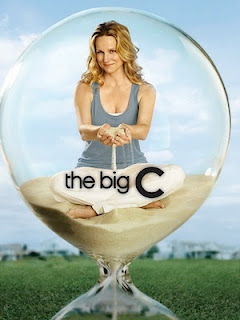 The Big C is a show that I started off loving, then got kind of bored with, and then was sucked back into. The more recent episodes have been a little more dramatic than the earlier, kind of wacky ones, but the penultimate episode of the season was the most heart wrenching to date.

I wondered how long this show could last, seeing as the main character is suffering from a terminal illness. Cathy only has a couple years to live, so the show couldn’t last that long, right? Wrong. By focusing each episode on a short amount of time, the series has left a lot of room for more to happen next season. This most recent episode, which saw Cathy travel to Canada to meet with a loony “doctor” for “bee sting therapy” (played hilariously by Liam Neeson) showed that there is more to the show than Cathy’s cancer.

The friendship between Cathy and Marlene has been one of my favorites. For a long time Marlene was the only person who knew Cathy had cancer, other than her doctor. She’s been looking out for Cathy’s son. She managed to talk some sense into Paul, who started treating Cathy like she’s sick (exactly what she didn’t want) upon learning that she’s, well, sick. I was sad when we learned that Marlene has Alzheimer’s. And I was really sad when this week after she didn’t recognize Adam, she pulled a gun on the poor kid. But I didn’t anticipate what would happen next. After the gun incident , Marlene took her own life. It was shocking, devastating, and beautifully written. Cathy was away, and had learned from a tarot card reader that someone close to her would die. “No shit!” she’d joked to her doctor, Todd. Little did she know.

My one complaint about the episode regards the kiss between Todd and Cathy. Todd, as a young doctor dealing with his first patient death, was already a good character. His relationship with Cathy was sweet and interesting. They didn’t need to go there. I wish they hadn’t gone there.

The Big C will wrap up on Monday night, and I’m curious to see what will happen. How will Cathy deal with Marlene’s death? Will she tell her brother or son about the cancer before the season ends? Meanwhile, we’ve still got four episodes left of Boardwalk Empire before the season ends. Any predictions?