There are a lot of mixed feelings out there about this season of Dexter, but I think it’s been really solid. Is it topping last season? No, not really. What can? But it’s a departure from last season, and I respect that. Dexter’s relationship with Lumen fascinates me. In fact, it fascinates me more than any of his previous relationships. Lyla was a nutjob. Miguel got too carried away. Trinity was always an enemy, never the partner. Lumen is Dexter’s first, and possibly only, real shot at a friend. At a partner. And that partnership took a huge step this week.
Dexter attended Jordan Chase’s crazy convention this week, and even though it was just so he could get to Cole, it seemed like it really helped him. Dexter and Lumen had a hard time getting Cole, who was a pretty dangerous dude. He had a dishonorable discharge from the army and was responsible for all those gashes on Lumen’s back. They eventually got Cole, but it wasn’t easy. Poor Lumen was chased through the hotel by him and saved only in the nick of time by Dexter.
There were several major developments, other than killing Cole, that occurred this episode. The first was that Lumen’s ex-fiancee showed up. He seemed like a sweet guy, and his offer of a round-the-world trip was a good move. But he has no idea what she’s been through, and there’s no way she’d tell him now. So she made a choice. She chose to stay with the serial killer rather than travel the world with her all-American, apple pie loving guy. That’s a bold choice. 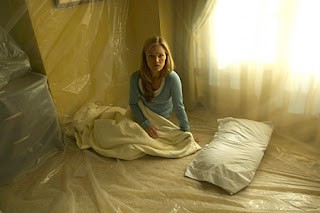 More importantly, Lumen actually witnessed Dexter kill. Not like she witnessed it before. She saw him go through the whole ritual. She realized that he does this a lot and that he does it for him. And she stayed. Dexter’s dad couldn’t handle it, and Miguel couldn’t handle it, but Lumen seems to be handling it. Will it last?
After killing Cole, Dexter realized that Jordan Chase was the “tick tick tick” guy. He’s not in the picture of all the guys from when they were teenagers, but he’s one of them now. He has to be taken down, and that won’t be easy. Plus, they’ve got someone on their tail now. Quinn’s spy has turned out to be quite the asshole. Not only is he following Dexter and Lumen (just how much did he see of that boat trip?) but he’s extorting money from Quinn. Either Quinn keeps paying him (I can never remember this creepy dude’s name) to continue the investigation, or he “slips up” and lets Deb know about the project. Veeeerry interesting.
Meanwhile, Deb is dealing with the fallout of having shot and killed one of the Fuentes brothers. The entire Santa Muerta case has been worth it for these consequences. The conversation between Deb and Dexter where she confessed that she doesn’t feel bad about killing the guy (and that is what is actually making her feel bad) was riveting. It might be my favorite scene between Deb and Dexter ever.
I’m also enjoying how Batista and LaGuerta have now been pitted against each other. That marriage is totally doomed. All eyes were on Batista after the nightclub shooting, because he’d be writing a report on what happened. Would he side with Deb/the truth? Or would he stick up for his wife? While he was figuring that out, LaGuerta was decided who the scapegoat should be. She originally chose Manzon, because the young cop’s career would take the smallest hit. But Deb couldn’t accept that, since she’s Deb. She wanted them to weather the storm together. As if LaGuerta is the kind of person to do that. LaGuerta turned the tables and made Deb the scapegoat, bribing Manzon to back up her story. (That little B!) Now Deb is on disciplinary leave, but Batista has taken her side. I like the politics of the police department a lot more than I like the romances, so I’m really excited to see where this will go. It kind of reminds me of something that would happen on The Wire.
What did you think of the episode? Is this rogue detective (I Googled him, his name is Liddy) going to be a bigger problem than we anticipated? Will Dexter be able to get Jordan Chase? Will Deb be vindicated? How long before a romance between Dexter and Lumen begins?