I have a confession to make: I’ve never liked Gwyneth Paltrow. Mostly in part to her super-pretentious website Goop.com. Also because I think she almost never looks good, is friends with Madonna and named her kid Apple. But guess what? I totally loved her in last night’s episode of Glee. She was all kinds of adorable. She was funny, charming, looked fantastic and sang really well. Am I a Gwyneth convert? Not yet, but I’d be happy to see her back on Glee a couple more times. 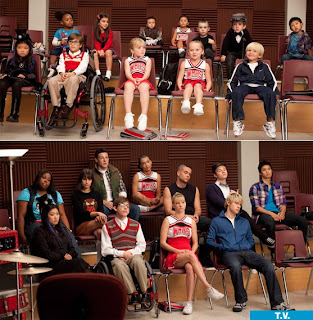 Gwyneth was introduced as Holly Holliday, a fun substitute teacher brought in after Will got taken out by the monkey flu. Also absent this week? Principal Figgins, which meant that the one and only Sue Sylvester was in charge. Yeesh. One of the highlights of the episode was when Will hallucinated that all the glee kids were actually toddlers. I’d seen all the photos of the Gleeks and their mini-me counterparts earlier that day, and they were dead on. And adorable. I want to take mini Mike Chang home with me.
This episode had a lot of Kurt and Mercedes which was great, but it also focused a lot on the teachers. Matthew Morrison and Gwyneth Paltrow both did a lot of singing, which was a nice break from the standard Rachel Berry solo finale that we usually are subjected to.
Holly’s trademark teaching style was that she wanted the kids to have fun and relate to her. She got them to discuss Lindsey Lohan in Spanish, tweeted to them when they did a good job and let them choose their own songs to perform in glee club. (Loved the running joke about “What Journey songs haven’t we done yet?” Poor Mr. Schue. Poor glee kids.) She proved to the kids that she really was cool by performing a super catchy, family friendly version of Cee Lo Green’s “Forget You”. This came as no surprise since I’d already watched the video of this performance about 17 times before the episode aired, but it was fan-freakin’-tastic. And with it, Holly won the hearts of the New Directions kids – save for perhaps Rachel, who was on a power trip and still needed some convincing.
Holly did end up getting through to Rachel though, with some very blunt honesty. As in, she said “Rachel, you suck!” But she convinced everyone’s favorite high-strung diva to relax and let loose a little, and that culminated in the two of them performing a fantastic version of “Nowadays”. Rachel didn’t hoard the spotlight, and it made me wish Gwyneth had been performing alongside Catherine Zeta Jones in Chicago rather than Renee Zellwegger. And speaking of hoarding, how funny was the scene where Sue Sylvester bonded with Holly over an episode of Hoarders? Hilarious, and well-played.
While Sue was plotting to take over McKinley High forever, Will was at home struggling with the flu and his ex-wife. Yep, Terri’s back. I run hot and cold on Terri. Sometimes I hate her, sometimes I love to hate her. I’m not sure how I felt about her this episode. I kind of liked that she tried to take advantage of Will at his weakest, but I’m kind of peeved that he fell for it. I’m glad he eventually told her that their hooking up was a mistake and that she shouldn’t come back. 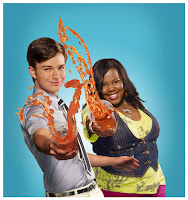 OK, let’s talk about Kurt and Mercedes. I loved the idea of Kurt becoming kind of a jerk to Mercedes now that he has a gay friend. Kurt is widely acknowledged as the heart of the show, but we also know he’s flawed. The way he kept breaking plans with Mercedes was insensitive, and the way he and Blaine rambled on and on and on about gay issues and mutual interests with little regard for Mercedes was a great example of what can happen when your best friend makes a new best friend.
What I didn’t quite get was the tater-tot thing. As a ploy to seize power, Sue banned tater-tots from the school and advocated healthy eating, and Mercedes was furious. Was it a comment on her weight? Was it supposed to relate to how she felt about Kurt and Blaine? I don’t think the story needed it. The look on Mercedes’s face when Kurt said he finally had someone to talk to said it all. He didn’t mean to hurt her, but by implying that she wasn’t enough for him, he did. So to then go and suggest that a) Mercedes has been using Kurt as a boyfriend replacement and that b) Mercedes has been using tater-tots as a boyfriend replacement, was a bit ridiculous. Mercedes was jealous because she felt like she was losing her best friend. That was enough. But, this was a minor gripe in an overall awesome episode so I’ll leave it at that. 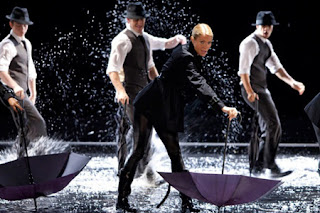 Even though Sue used her new-found power to permanently replace Will with Holly, it didn’t last long. Holly is fun, but she can’t handle the serious stuff…like Mercedes damaging Sue’s car by jamming tater-tots in the exhaust pipe, and then getting suspended…or something. She resigned, but she also helped Will create a mash-up of “Singin’ in the Rain” (his favorite song) and “Umbrella”, something that the kids had actually heard of. The door was clearly left open for Holly to return, and I really hope that she does.
What did you think of the episode? I think Gwyneth might be my favorite guest star to date, who is yours? And before we talk songs and best lines, let me share this with you: I downloaded the Glee Christmas album yesterday, and loooooove it. I highly recommend it for anyone who likes holiday spirit and joy.
OK, performances. “Forget You” was probably my favorite of the night even though I’d already seen it, but everything was solid this week. Will performing “Make ’em Laugh” in his dreams with Mike Chang dancing with him? That was amazing. Say what you want about Will Schuester, but Matthew Morrison is an amazing song and dance man. “Nowadays” was also great – the perfect choice for a Rachel Berry selection. As for the finale of “Singin’ in the Rain/Umbrella”, I was unsure how this mash-up would work but ended up loving it. (And yes, I’m turning a blind eye to all the amazing special effects in the McKinley High auditorium this week. If you’re a stickler for realism, Glee is not the show for you.) This was a solid, solid episode and the music certainly didn’t disappoint.
On top of musical performances, there’s another way to identify a great episode of Glee – how many hilarious, memorable lines there are. (This works more for the comedic episodes than the dramatic ones.) I couldn’t write the lines down fast enough last night! Here are a few of my favorites: 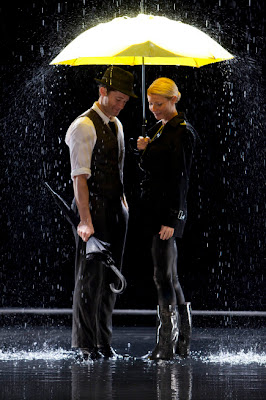