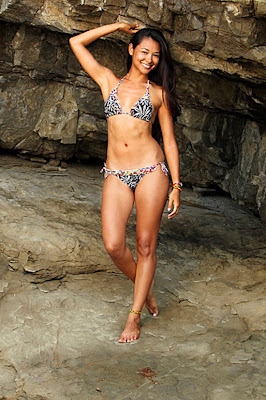 I like Brenda. On Survivor: Nicaragua this season, if often seemed as though she was the only person out there actually playing. And in her post-elimination interview today she came across as smart, funny and like an all-around nice girl.
She got a raw deal on last night’s show, if you ask me. Probst basically accused her of not trying hard enough to stick around, and that just wasn’t true. “I hated the way it looked,” she said. “Like I didn’t care.” Just because Brenda wasn’t “scrambling” doesn’t mean she wasn’t trying to win. “The only people that could save me were the people I looked at from the beginning of the game – Chase and Sash. Let’s get real here, everyone else wanted me gone. Long gone,” Brenda said. “The only people that could save me was my alliance and I tried to make it clear that the rest of the group were targeting them by targeting me. I tried to show them that I was loyal to them to the last minute. That was my fight.”
But, she doesn’t hold Sash’s decision to keep the idol for himself against him. “We’re both kind of the same player and I probably wouldn’t have done it either. He would have given up something so huge in the game so I respect what he did and don’t feel anything bad about it. As for going into Tribal Council, it was my hope that he might have given it to me and I held onto that hope. I thought maybe his trust in me would inspire him to to keep me around because of my loyalty but that obviously didn’t happen.”
As for the rest of the game, Brenda said she doesn’t regret aligning with NaOnka. Apparently NaOnka was 100% crazy 100% of the time. “What people don’t see is the sweet side of Naonka. Believe it or not, she’s a good person,” Brenda said. “I’m not trying to defend her bad side, but there is an explanation for why I trusted her.” However, Brenda said she did regret letting NaOnka hold onto the immunity idol early on in the game. “People knew we were going to get it, I wanted Naonka to have the target on her back since I already had one on mine,” she said. “It was still within the alliance, but that was wishful thinking because you never have it unless it’s in your pocket. That’s the one thing I look back on and go ‘duh’!”
Brenda said NaOnka never liked Kelly B., but not many other people did either. “Kelly B. didn’t really have the best personality.” Brenda said NaOnka “had some misconception about Kelly being weak, which I didn’t agree with at all.” But, Brenda said, both girls fought equally for the hidden immunity idol clue. “She [Kelly] can take it, she could probably beat NaOnka up.”
Brenda said another misconception was that she didn’t like Marty. Although they didn’t get along at first, she didn’t actually want to vote him out. “The only reason I did it was to go along with my alliance. It was the only vote that I was uncomfortable with and look where I am,” she said. Brenda also said she wasn’t playing Chase, but that their friendship developed very naturally. Her plan for the game was to become friends with as many people as possible. “They’d come up and say ‘I like you, I’m not going to vote for you’,” she said. “Music to my ears.”
As for the rest of her tribemates, Brenda described Fabio as a great guy who grew a lot during the game and said Kelly was very quiet in real life. “Hey, who says being invisible isn’t a strategy, right?” she joked. She also said she underestimated Holly and NaOnka in the end and “that was my fault.”
Had she made it to the end, Brenda was hoping to take Kelly Purple and NaOnka to the finals. But she was really only thinking as far ahead as the final five. “You have to be flexible on a show like Survivor but I was very keen on keeping the final five, which was me, Sash, Kelly Purple, Naonka and Chase. We were always talking about that – some people were talking about final three but I was up in the air about it. I think I would have taken Kelly Purple and Naonka to the end though because that would have been a guaranteed win for me. Still, I think I would have been willing to go with anyone.”
Again, I’ve got to say I thought Brenda came across really well in this interview. She was the first person I’ve interviewed (granted, I missed a couple of the conference calls) who actually identified some moves in the game that she regretted. She seemed smart, honest and had a good sense of humor. Which is why I really wish I hadn’t been talking to her today when there are still people like Kelly and Benry kicking around.
What did you think of Brenda? Do you wish she was still in the game?