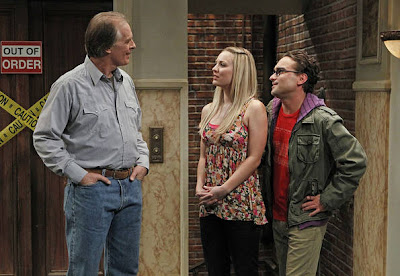 OK, Big Bang fans – do you want Leonard and Penny back together or not? Because, let’s face it, the past couple episodes have shown that that’s a possibility.

First Penny freaked out when Amy and Bernadette questioned her about her feelings for Leonard. Now we find out that she lied and told her dad that she got back together with Leonard since he was the first guy her dad had approved of. Personally, I’m all for a reunion. I’d like to see Leonard and Penny give it another shot – but this time Penny would have to be more serious about the relationship.
I loved Keith Carradine as Penny’s dad. (I still miss him on Dexter. Sad face.) He was so enthusiastic about Penny’s relationship with Leonard. I loved seeing Leonard play into that just to annoy Penny. Plus, the long list of losers Penny had previously dated (neck tattoos!) was pretty hilarious.
More humor came when Sheldon was kept out of the dark (he’s no good at keeping secrets) and believed that Penny and Leonard had actually gotten back together. He stayed up all night to revise the roommate agreement based on Penny’s various annoying habits. In the end, Penny came clean to her dad. He secretly encouraged Leonard not to give up on his daughter and then loudly yelled at him to stay away from her – nice reverse psychology. And of course, Sheldon was incredibly annoyed when he was told the couple had once again broken up and all his work was for nothing.
Meanwhile, the subplot with Raj, Howard and Bernadette was pretty funny. The three nerds were spending the night together because of some super-nerdy telescope thing, but that meant Raj had to indulge in some wine in order to participate in the conversation. He got drunk, of course, made prank phone calls about the telescope and then made an sloppy pass at Bernadette that resulted in an accidental kiss with Howard. It was cheap humor, but because of the relationship between Howard and Raj, it was hilarious.
I loved seeing Raj, Howard and Bernadette hang out and I thought the visit from Penny’s dad was a fantastic way to give Leonard some really funny material. So I’m chalking this episode up as a success, how about you?
Here’s some of my favorite lines and moments from the episode: