Is this the year? I certainly hope so. Not to toot my own horn, but I was been talking about wanting an all-girl victory on The Amazing Race long before it became a thing that people talk about. In the fifth season I thought the super-adorable “bowling moms” had a shot. In the following years, it became more and more apparent to viewers that an all-girl team had never one. I kept hoping. We came close in season ten, when the third and fourth placing teams were all-girl partnerships. The next season, The Amazing Race: All-Stars, also came close – wacky cousins Charla and Mirna placed third and beauty queens Dustin and Candice came in second. In the fourteenth season, I thought sisters Kisha and Jen might have a shot…until one of them had to pee. Also that season, obnoxious cheerleaders Jaime and Cara (OK, only Jaime was obnoxious) almost made it but ended up placing second. By then I wanted an all-girl win so badly I was actually rooting for Jaime.
Now, with two of four teams remaining being all-female, could it actually happen? The fact that Amazing Race history could be made really makes up for the fact that with Gary and Mallory’s elimination last week, I don’t really love any of these teams. As long as Brook & Claire or Nat & Kat win, I’ll be happy.
Sidenote: The next season of The Amazing Race (filming right now) is an All-Stars version. Yippee! Who do you hope to see again?
OK, let’s talk about this week’s episode.
Hot Eats, Cool Treats, Leads to Defeats
As the leg kicked off, everyone was atwitter with talk of the upcoming double U-turn. I’ve never loved the U-turn, but the double U-turn is definitely an improvement since it wouldn’t doom one team to an almost inevitable last place finish. Two teams having to perform an extra task means there’s still a lot of suspense.
Chad reminded the viewers at home of why he’s a complete jackass by saying he planned on U-turning Nat and Kat since they’re a strong team and “I just don’t want to lose to a pair of girls.” Oh. My. God. You suck. Argh! 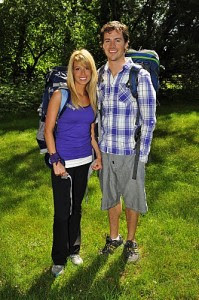 All the teams had to grab a flight to Dhaka, Bangladesh to start off the leg. I thought this would even things out, but while Chad and Stephanie were chowing down on Big Macs and Blizzards, Jill and Thomas were booking themselves on a flight that landed at 5:00 a.m. rather than the noon arrival time everyone else had settled for. I haven’t been the biggest Jill & Thomas fan (and I’m still not) but that was a good move. Had it come down to a final three consisting entirely of Hairstylists and Jerk Boyfriends, I would have rooted for them. Everyone other than Chad and Stephanie caught on to the fact that Jill and Thomas had just scored an amazing lead, but by then it was too late. Nick and Vicki managed to grab the last seats on a flight arriving around 8:00 a.m., but the other teams were all stuck on the noon flight – even Nat and Kat, who took an extra trip to Dubai to try and nab something better.
Jill and Thomas’s hard work paid off, and they breezily completed the leg without even spotting another team. They made some sugar cane juice, carried a bunch of bricks on their heads, Jill put together a bicycle rickshaw with surprising ease (though she lost points for saying “nuts and bullets”), and they trotted off to the pit stop to collect a $15,000 prize. Not a bad day. Oh, they also chose to U-turn Brook and Claire, which was a questionable decision. With a lead like that, I might have opted out of the U-turn – why make enemies who will just seek revenge later on? Plus if they were going to U-turn someone, Brook and Claire would have been my last choice. The docs have more first place finishes, so they were a more sensible option. Or they could have chosen to try and knock out one of the other dating couples – I’d say Nick and Vicki are a pretty powerful physical threat.
Nice Girls Finish Second 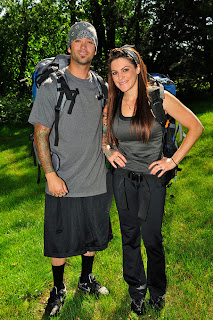 Nick and Vicki also made good use of their lead. They opted to deliver food for their Detour, but managed to quickly finish the task without communicating with each other at all. They might be dumb, but there’s a really good chance that we’ll see Nick and Vicki in the finals.
Vicki chose not to U-turn anyone, despite Nick’s protests. I thought it was an admirable decision. They knew they were way ahead of the other teams so it just wasn’t necessary. Nick went on to build a bicycle better than he was previously able to ride one, and they ended up in second place – their best finish to date. The fact that they’ve never won a leg doesn’t suggest they have much of a shot at winning this thing, but crazier things have happened. Personally, I don’t want to see them win it at all. Nick might have kept his temper in check this week, but the preview scenes show him screaming at Vicki because he’s tired of her and her asthma. Yep. He yells at and berates her over an unavoidable illness. Sooooo classy.
Bricks and Bicycles 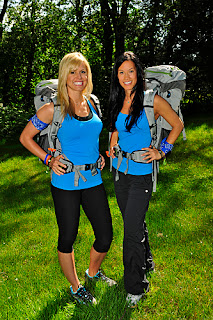 With Thomas and Jill and Nick and Vicki already checked in, the three teams with noon arrivals were in an intense race for the final four. I don’t think it’s any secret who I was hoping would be eliminated. Chad and Stephanie started off on the wrong foot immediately after the sugar cane task when their rickshaw driver took them way past the docks for the food delivery Detour. That’s when Chad’s inner Ugly American started to emerge (though was it ever that well hidden?), and it never really went away for the rest of the episode.
The docs and Team Home Shopping raced through the food delivery Detour, and the docs arrived at U-turn station first. Since Brook and Claire had already been U-turned, they could only choose between continuing on or U-turning Chad and Stephanie. Obviously, they had to U-turn Chad and Stephanie. The race was too neck-and-neck and the stakes were high. It was the right move. 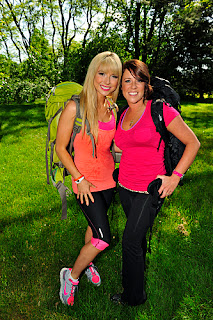 While Nat and Kat headed off to build a rickshaw, Brook attacked the U-turn with the enthusiasm of a kid going out for a second round of trick-or-treating. You’ve got to hand it to the woman, as annoying as she can be she has an unfaltering energy and attitude that is a major asset in this competition. She chirped her annoying/encouraging chirp at Claire all the way through the bricks challenge until they’d finally completed it. I felt bad for Claire who clearly isn’t as physically fit as Brook (at one point she reminded Brook “I don’t run marathons like you. If you wanted that, you should’ve gotten a different partner.”), but Brook’s constant cheerleading must be doing the trick because despite all her whining, Claire finished the task. Plus you’ve got to hand it to Brook for responding to the complaints with “Just take less, I’ll take more!” That’s a good teammate.Plus, she delivered some fantastic lines last night like “There’s a lot of staring in Bangaldesh. I don’ t think they see a lot of our kind,” and “I really don’t want to go to prison here.”
Brook and Claire managed to catch up with the docs at the Roadblock, and after completing the bricks Detour as well, so did Chad and Stephanie. Not until they’d gotten into the first (that we know of) major argument since their engagement that included Stephanie screaming “SHUT THE HELL UP!” at her less-than-supportive fiancee.
Predictably, Chad had the worst attitude about the U-turn ever. Come on, dude. You were talking about U-turning the docs all episode. Do not hate on them for beating you to it. He mocked Nat’s PhD (even though she has an MD) and yelled things like “Big, smart doctor can’t put a bicycle together!” But then the big, smart doctor did put the bicycle together and Team Doctor raced off to land in third place. 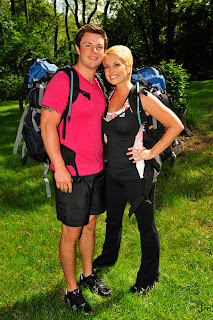 Both Stephanie and Brook struggled with parts of the bicycle rickshaw (who didn’t struggle with that pesky bell?) and it ended up being a pretty close and exciting finish. Boy, was I ever rooting for Brook and Claire to make it to the pit stop first. And they did! Take that Chad. You were beaten by not one but two all-girl teams. I loved when Phil responded to Brook’s complaint that Thomas had U-turned a couple of little girls by saying “Don’t even try to pretend like you guys aren’t a threat!”
What did you think of the episode? Is there anyone you really don’t want to see in the final three? Who are you rooting for to win the whole thing?