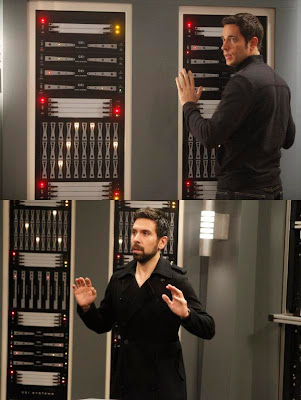 Well that felt like a season finale, didn’t it? That’s because last night’s episode of Chuck was originally going to be the season four finale, before NBC wisely ordered up some more episodes of my favorite spy show. So instead, we got an action-packed treat last night!

I’ve been a fan of the Chuck’s mom/Volkoff storyline, so I was satisfied with the episode. In fact, I loved it. The first part of the episode was jam-packed with action and excitement – Chuck, Morgan, Sarah and Frost all working together to take down Volkoff? Love it! Plus we had Casey connecting with his daughter while he’s laid up in the hospital, and Awesome freaking out while a freakishly calm Ellie went into labor.

I also liked how everything was wrapped up with a bow, because now we can look forward to what will happen to these characters next. Mama Bartowski being the first to join Ellie in the delivery room as a nice reminder of why Chuck and Sarah worked so hard to get her back – it wasn’t just for Chuck, it was for Ellie too. And Chuck proposing to Sarah in the hospital, without any bells or whistles, was absolutely perfect. After everything they’ve been through, and all of Chuck’s grand proposal plans, it was the best way to move the couple to the next level.

I also loved how Chuck’s dad was tied into the episode, without relying on any gimmicky He’s Been Alive The Whole Time crap. I knew it would be Chuck in the cabin, but that didn’t make it any less brilliant. I especially loved the fact that Chuck’s gun wasn’t loaded and he managed to get Volkoff to utter the words that acted as a password to Hydra. Chuck didn’t need the Intersect to take down Volkoff, he used the intelligence he’s had all along. The intelligence he had in common with his dad, and the intelligence that made the CIA try to recruit Chuck when he was in college.

Personally, I’m now really looking forward to a clean slate and new bad guys for Chuck. Ellie and Awesome have a baby. Chuck and Sarah are engaged. Morgan, Alex and Casey have formed a weird little family of their own. All is right in Burbank, so what will happen next?