After forcing me at gunpoint to read and review the Larfleeze Christmas Special, our esteemed editor has been trying to get me back reviewing more comics. So, Grey and I came to this agreement. He’ll give me a random comic to review every week. This experiment started in a rather odd way. “Review Batman Beyond #2!” Grey provided me with the six issue mini-series from last year, and the first two issues of the current series.

While I was a fan of the Batman Beyond cartoon, I really wasn’t in the mood to read anything “Johnny DC.” Imagine my surprise when in the first issue of the miniseries, we see Signal Man get killed and “Hush” slice up a nurse just to send a message. It wasn’t done gratuitously; there was a great story here that is perfect for young and old readers.

The mini quickly established itself in Batman Beyond’s continuity, bringing in a new version of the Catwoman, tying in elements from Return of the Joker, and set up Cadmus and Amanda Waller perfectly. Even the cloning elements worked, since this story takes place between the end of Batman Beyond, and his later appearances in Static Shock and Justice League Unlimited where we find out that Terry is a clone of Bruce Wayne.

I literally read the mini in an half hour, and was eager to get started on the ongoing. This is exactly the type of comic I like to read. Standalone, fun, and fast-paced.

Issue 1 introduced a new “Matter Master.” A man dying of a disease who steals the original Matter Master’s “Mentachem” wand to try and heal himself, and the power quickly gets out of control giving him a sort of Mida’s touch which allows him to transmutate anything he touches. In a panic, he ends up taking a mall hostage…a mall where Terry’s mother and brother happen to be shopping for Matt’s graduation. The Justice League arrive, and Terry is worried they are going to screw up and get his family killed, so he decides to stop them.

Most of issue 2 is an extended fight between Batman and the Justice League with Bruce Wayne telling Terry the best way to take down each member. It’s almost like a game of chess, with Bruce having Terry take small “losses” to set up bigger victories. This was some clever writing, and gave the story some unique twists. I especially love how Batman takes out Green Lantern twice. One with a punch, once with a batarang…and later realizes that might have been a mistake. 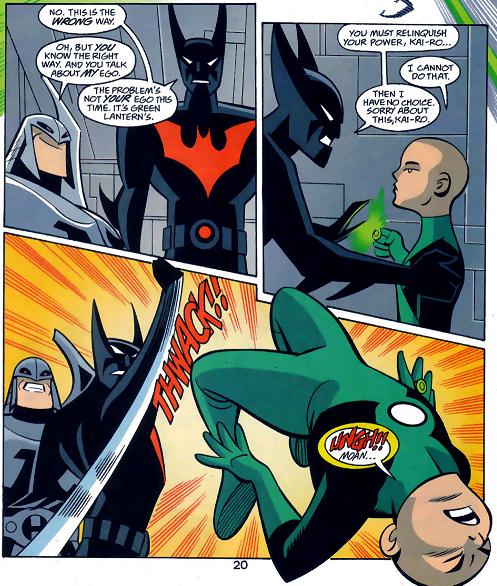 BTW, I was surprised to see this wasn’t the first time Batman Beyond knocked out this Green Lantern in comics. I was looking for a screen cap from this issue, and instead found this from Batman Beyond Vol. 2, issue 22. What is what Batmans and beating up poor Green Lanterns?

One of my favorite elements of this issue was how much fun Bruce seemed to be having taking out the Justice League. This was not a pretty side of the character, but I still think it worked very well.

In the end, the heroes kiss and make up and resolve to take down the bad guy together. Reluctantly, the League allows Batman to lead them. They discover that while they were fighting, Matter Master has turned all the hostages to copper, including Terry’s family!

The mini-series did rely a bit heavily on elements from the Bruce Wayne mythos, but in this ongoing series they seem to be getting away from that. I loved the fact that Tweedle Dee and Tweedle Dum have their own zealots like the Jokerz, and that Terry can’t bring himself to take them seriously.

In true Batman Beyond fashion, this time we get introduced to a new Matter Master. MM’s story is very classic comic, and I am glad that they went that direction. It really feels like a modern version of a Silver Age story.

I really like how these comics bridge the gaps in what we know about Batman Beyond. Seeing him starting to work with the Justice League definitely helps us see how ten years later he will be leading this group. Adam Beechen really has a great feel for the characters, and tells a great story. It probably would have been possible to tell this story in two issues instead of three, but it never felt padded. Beechen was able to get in a lot of characterization, and set the stage for the series to come. In the mini, we didn’t get a chance to see much of Terry’s girlfriend and family, but Beechen resolves that early.

I absolutely love how Ryan Benjamin draws Terry and his characters. He is easily able to handle the darker stories like the mini-series, and switch tracks to do a lot more typical superhero comic like this story. I really hope he’s at SDCC, because I want to get a Batman Beyond sketch!

Quick side note, I love the little “Drawing the line at $2.99” caption on the cover. I am glad that DC and Marvel are trying to keep prices down!

Final Score: 9.0 – Beechen and Benjamin are the perfect fit for Batman Beyond. I wish more comics were written this way!