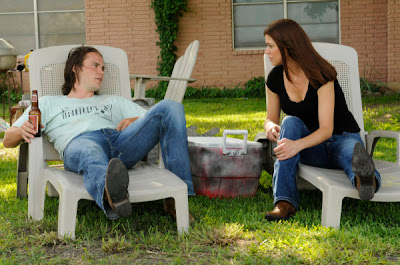 I may have judged the penultimate episode of Friday Night Lights too harshly the first time I watched it. Tyra Collette is one of my favorite characters, certainly from this show and overall in general, and I had high hopes for what her return to the show would bring. But after the episode was over, had we learned anything about this older, wiser Tyra?

We learned that she and Julie think Dillon, Texas is a hard place to shake. We learned that she’ll always have a connection with Tim Riggins. And we learned that she’s just as hot with dark hair as she was with blond. But we didn’t learn anything about who she is now. Is she still in college? She’s going back to college after her visit home, right? There is nothing I want to see less than Tyra moving home to help Mindy take care of three kids. I’d send Tim Riggins back to jail to save that girl.

My main complaint from the episode was that Tyra seemed to just be a plot device. Someone to dispense advice to other characters. She gave Julie the obvious news that Julie still loves Matty Saracen. She broke the news to Tim that his brother and Mindy are having twins, and seemed to maybe get through to him with her brilliant “Alaska, Tim?” as they gazed out at his own piece of Texas. But we never learned anything about her, and that bugged me. Also, I’m a teensy bit skeeved out at the idea of Tim and Tyra sleeping together again. I mean, they share a nephew. She did always get him, but I don’t want Tim or Dillon to be Tyra’s future.

That said, after watching the episode a second time I realized that it was actually pretty brilliant and I had been focused too much on the Tyra stuff the first time around. So let’s talk about everything else. 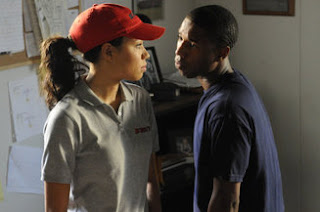 The Lions are out, the Panthers are in. Vince gave a touching speech, he reconciled with Jess, and the hug Coach Taylor shared with him was one of the most moving things we’ve ever seen. He’ll be the star quarterback of the Panthers next year. He’ll be on a team that has ridiculous funding. But will he have Eric as his coach?

Buddy’s being wooed by his old booster buddies, but only because they know he’s the one who can woo Eric back to the Dillon Panthers. They need him for Vince. And it’s an opportunity for Eric – as Buddy said, it could get him a record three State rings in three years. But what about after Vince graduates? Eric would be in exactly the same place he was a few years ago – stuck in the middle of a bunch of petty social politics. And what about Tami? 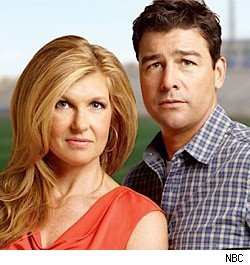 I really want Tami to get to take the job. And I really want Eric to support her in it, and move to Pennsylvania. But after the way he acted this week, is it possible for him to get there in just one last episode? And if not, how will Tami react? I obviously do not want Coach and Mrs. Coach to break up. That would be catastrophic. They’ve always been the most realistic, amazing couple on TV and I want (need?) them to be able to resolve an issue as large as this one. But if Eric says no, won’t Tami resent that? I certainly would. When Eric told her they wanted him to coach the new team, she summed everything up by saying “I’m going to say to you what you have not had the grace to say to me. Congratulations, Eric.” After all, she’s been a coach’s wife for 18 years. She’s been moving around from town to town for Eric’s coaching career for 18 years. She’s been saying “Can I get y’all some ice tea?” for 18 years.

Meanwhile, Mindy had a very realistic breakdown over the news that she has twins on the way. Billy’s future in coaching is questionable at best, especially if Eric doesn’t coach the new super team. I don’t know how they’re going to make it work, but I’m rooting for them. I question their family planning skills. I question…well, basically everything about Billy Riggins. But I want them to be OK. (And I want them to send Tyra on back to college. Don’t drag her down too!)

Watching the boys from the Lions team kiss their field goodbye (almost literally) was a nice touch, since it was so reminiscent of the characters we loved back in the first couple seasons. I don’t care about all of these characters (coughcoughBuddyJrandthatbasketballkidcoughcough), but I care about Vince. And I like Tinker. However, just as I was kinda sorta starting to be OK with Luke, he went and annoyed me again.

On the one hand, I feel bad for Luke. His college meeting did not go spectacularly, and he’s feeling lost. But seriously, dude? Buck up! Is that Arkansas school planning on paying his tuition? Because if so, why not go? You get to keep playing the sport you love, and you get a free education. And you get to go fishing. It’s not like Luke was ever destined for the NFL, so why is he turning his nose up at this? And why is he turning to Tim “Darkest Hour” Riggins for advice? The dude just got out of jail, he is obviously not going to show you the Pollyanna side of your future. Plus I hated the way Luke treated Becky, and the fact that after she poured her heart out to him he went and asked Tim if he was in love with Becky. Becky deserves way better than Luke.

It’s Christmastime, so Matty came home to visit his grandma and hopefully reconnect with Julie once and for all. His final scene was pretty heartbreaking, since Grandma Saracen’s dementia has obviously progressed. But even in that short amount of time, we could see that Matt is more mature and confident than ever before. We caught a glimpse of that in Chicago, but seeing him come home to his grandmother, all grown up, was touching.

The episode was packed with drama, and I’m really glad I decided to watch it a second time before reviewing it. Even though I’m not thrilled with the material Tyra got, it was a knockout episode. There is so much unresolved, I have no idea what will happen in the final episode. Will it be longer than 40 minutes? Why can’t I have a two hour special?