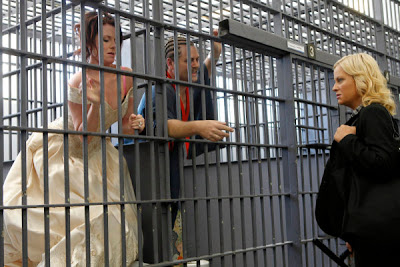 Who says sequels always suck? If you ask me, Parks and Recreation‘s “Ron and Tammy, Part Two” was even better than their first ill-fated reunion. I mean, Ron rubbed off part of his mustache! He got cornrows!! He CARRIED TOM LIKE A LITTLE BABY!

Sorry for the use of all caps, but that deserved it. It was epically hilarious. I need it as my screensaver. Megan Mullally was absolutely hilarious too, and her role is exponentially funnier since she’s actually married to Nick Offerman.

Ron and Tammy’s reunion was sparked by Wendy returning to Canada, despite the fact that Ron had just taught her to whittle and everyone on American sitcoms know that Canada totally sucks. Just as Ron was mourning the end of his relationship with Tom’s ex-wife, Tom showed up with Tammy on his arm to get back at Ron. And, presto! A perfect storm was created. Ron and Tammy got married, got cornrows, and got arrested.

The whole Ron and Tammy debacle also gave Ben the chance to learn a little more about just how amazing and beloved little annoying Leslie Knope is. This is a testament to just how different Parks and Rec is from The Office. No one wants to do Michael Scott favors.

As hilarious as the Ron and Tammy Part 2 storyline was, I also really loved the stuff with Chris (Rob Lowe) and April. Since we started watching Parks and Rec, my boyfriend has been telling me how much April reminds him of me, and as much as I denied it at first, he’s kind of right. April’s reaction to working with Chris felt very familiar – people like Chris can drive me a little up the wall. If I had cameras follow me around all day to film a mockumentary (and oh, how I wish I did) I’d roll my eyes and hold up post-its saying “Save me!” too.

I loved Andy’s attempt to save April from the chipper hell that is working as Chris’s assistant, and also seeing Ann get so into Chris (and the vitamins he has her taking) that she’d actually move to Indianapolis. Unfortunately, he only made that offer to April. To come work for him, obviously, not as his girlfriend.

I’m sure I’m not the only person who wants to see some romance between Leslie and Ben, and I can’t live without Rob Lowe’s comedy anymore. So how will they keep these two in Pawnee?

What did you think of “Ron and Tammy Part Two”? Better than part one? Are Ron and Tom even now that Ron rescued Tom from Tammy kicking the crap out of him? And on a scale from 1 to 10, how much to calzones suck? Now, check out these totally hilarious quotes and moments: