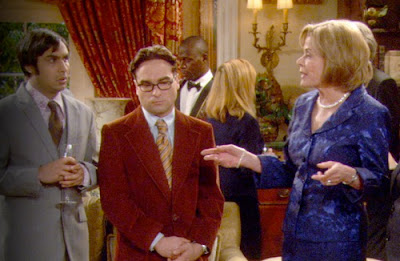 Finally. I’ve been waiting for The Big Bang Theory to give Leonard a good, comedic storyline, and last night I think he got it. Seeing the poor nerd try to deal with the affections of a wealthy possible donor – played to perfection by Jessica Walter – was hilarious.

Jessica Walter was very funny, taking great joy in seeing anti-social or shy scientists squirm as they were paraded around in hopes that she’d donate some money to their work. Really, everyone got to show off a little. Raj’s discomfort was typical, but funny, and Sheldon shone without completely stealing the episode. The foil of Leonard’s moral dilemma and Sheldon’s pride was fantastic. Even Penny got to deliver some funny lines, even though her main role in the episode was to observe the whole debacle.

Despite Sheldon’s urging, Leonard remained firm in his stance that he would not sleep with the old woman in exchange for a large donation. The twist was funny – after finding out the university would be getting the donation anyway, Leonard decided to sleep with the woman because she claimed to be really, really good in bed. By the looks of him the next morning, I don’t think she was lying. Even though Leonard didn’t do it for the money, everyone thought he’d taken one for the team…and really, there’s not much of a difference.

People have been pretty split on the addition of Amy Farrah Fowler to the show, but I’ve always rather liked her. In particular, her video chats with Sheldon have become a good source of comedy. Even though she’s similar to Sheldon, she is slightly more rooted in reality and I liked seeing her explain the importance of schmoozing for funding.

Did you like “The Benefactor Factor”? What was your favorite moment? Check out these highlights: