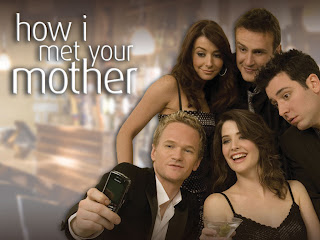 With Ted entering into a relationship that I’m really not a fan of, I have to say – thank god for the others. I liked everything about Marshall, Lily, Robin and Barney on How I Met Your Mother this week.

I think the show has done a fantastic job of keeping humor alive while still allowing Marshall to deal with his grief. It would have felt inauthentic and insensitive for things to just easily go back to normal, but the show is still a half hour comedy. I really commend the writers for finding this balance. Watching Marshall revert back to lazy, somewhat obnoxious teenage-hood was hilarious, especially because his mom was ready for him to go back to New York. 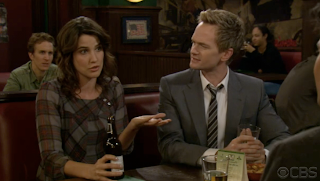 Meanwhile, Barney acting as the predator on “Desperation Day” (February 13th) was fantastic, and made even better by the fact that he might actually fall for someone – Robin’s friend Nora. Nora is smart, witty, and wasn’t fooled by Barney’s lines. But Robin (who is back to fine form, thank god, being totally OK with her single status on Valentine’s Day) saw that Barney actually liked Nora and set them up for a Valentine’s Day laser tag date. I’d like this relationship to go somewhere. I wasn’t a huge fan of Barney and Robin because I like them better as friends, and because I didn’t want 4/5 of the gang to be dating. But I think Barney belongs with a girl like Robin, and that girl might be Nora.

Speaking of Robin, though, can girl get a storyline? She delivered some good lines this episode, but I feel like she hasn’t gotten much since her major break-up with Don. Marshall and Lily have been the stand-out characters so far this season, but I think it’s time to let the rest of the cast shone. Barney has some stuff with his dad coming up, and I’d like to see Robin get something in her own right as well.

The less likable storyline this week involved Ted and Zoey. I just can’t get into it. First Ted tells Zoey he’s willing to take things slow. Then he essentially puts the pedal to the metal by bringing a girlishly large overnight bag, slippers European morning socks and all, to her place for a potential booty call. Then she tells him she’s ready to make things serious and he panics? For years now, Ted has been saying he wants to meet the one. I don’t want Zoey to be it, but if he’s dating her I would hope he thinks that. Whether her situation is complicated or not, it was pretty douchey for him to freak out like that.

That said, I liked where Ted’s freak-out led – to Minnesota, where he could hide from adulthood and play video games with Marshall. Along with a visit from Lily, his drop-in helped Marshall realize that it was time to emerge from the comfort of his childhood bedroom and face real life without his dad. The drive in the snow, and Marshall remembering how brave he thought his dad was when driving in the dark, was really touching.

What did you think of “Desperation Day”? Are you ready to see Marshall in a relationship? Do you think you can get on board with Ted and Zoey? And is dressing up a body pillow weird? Now, check out some of my favorite quotes and moments from the episode: