I’m ashamed to say that it’s very possible I only watched one episode of Parks and Recreation before writing it off as a drab The Office wannabe. I might have seen snippets of other episodes throughout the short first season, but I don’t think I ever viewed an entire episode again.

There were a few reasons I originally wrote off this show. The office-set mockumentary style show seemed to be the funhouse mirror version of The Office, a show I really liked (and still do).I thought Amy Poehler’s character might be too over-the-top, and the idea of a wacky woman trying to build a park just didn’t grab me.

But then I started to hear that the second season was really, really funny. Insanely funny. And I started to feel left out. I hate feeling left out, especially when it comes to pop culture. When the third season began on January 20, reviewers and friends raved about the first two episodes. So I decided to rent the first two seasons. 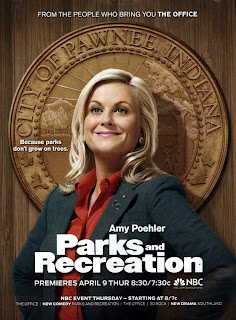 The first season is funny enough, but not outstanding. Had I watched three episodes (the amount of episodes I now usually give a new show) I’m not sure I would have stuck with it. But what’s great about catching up with a show on DVD is that people can tell you whether or not you need to stick it out. Just like I knew to keep watching Cougar Town at least until the Thanksgiving episode, I knew to keep watching Parks and Recreation until I hit the second season.

The first episode of the second season 100% won me over. The show is much warmer than The Office and Leslie Knope is different than Michael Scott. I like both shows and there are still similarities – they’re still both wacky workplace mockumentaries – but it’s not like watching the same two shows on Thursday night.

In the first season we meet Leslie Knope, an eager, constantly upbeat parks and recreation department employee in Pawnee, Indiana. She LOVES her job and is trying to turn a big, ugly pit into a park. While that storyline sticks around in the background throughout the series, we do move on from it. In fact, it serves more as a method to begin a friendship between Leslie and Ann, a nurse who lives behind the pit, than as a storyline. 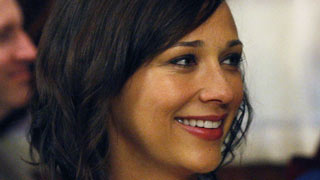 I really like Ann on the show because she and Andy (her boyfriend/ex-boyfriend) don’t actually work in the Parks department, and that’s another way the show separates itself from The Office. The whole cast on the show is truly great. I expected Amy Poehler to be over-the-top as Leslie, but instead she’s wacky but grounded at the same time. She can act as the voice of reason in some situations, and as a total Crazypants in others, and I really like that.

Rashida Jones is good as Ann, and she has more of an opportunity to be funny than she did during her brief stint on The Office. Other characters include her lovable screw-up ex-boyfriend Andy, the macho boss Ron Swanson, wannabe ladies’ man Tom Haverford and sarcastic intern April. Each character on the show brings the humor in a different way, and no character is particularly unlikable. (Except Gerry. Everyone hates Gerry.)
In the first episode of season two, Leslie accidentally marries two penguins at the local zoo and inadvertently becomes a gay hero. It’s miles funnier than any of the episodes from the first season and really sets the tone for the second season. For me, the standout episode was the tenth in season two, “Hunting Trip”. It’s the perfect combination of everything I love about the series. 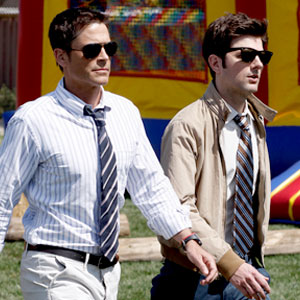 At the end of the season two new characters are introduced, played by Rob Lowe and Adam Scott. So far in the third season, they’ve integrated really well with the rest of the cast. Season three has been hilarious so far. I’m totally OCD and cannot start watching a television show unless I start from the beginning and watch every single episode in order, but I know that I’m not really normal. And Parks and Recreation is totally the kind of show that you can pick up midway through. I cannot imagine doing that, but I also cannot imagine taking a sweater out of my closet, which is organized based on style, fabric and color, and not putting it back in exactly the same spot. So I recommend that you start watching Parks and Recreation RIGHT NOW while simultaneously catching up on past episodes.