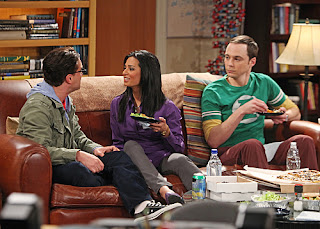 Thursday night comedies were seriously on fire last night. Much like my beloved NBC comedies (Community, The Office, Parks and Recreation), The Big Bang Theory had me laughing out loud more than once last night.

“The Cohabitation Formulation” was a great example of an episode that uses the whole cast well. I didn’t feel like any one character was wasted, and they all got to be really funny. If this didn’t prove that making Bernadette and Amy regular characters was a good idea, I don’t know what will.

The episode was divided into two basic storylines – Howard and Bernadette taking their relationship to the next level, and Leonard rekindling his romance with Raj’s sister.

Howard’s bizarre co-dependent relationship with his mom had to be addressed at some point. Let’s face it, Bernadette is out of Howard’s league. This had to be a storyline eventually, it was just a matter of when.

Bernadette broached the subject of moving in together with Howard after growing tired of him bailing on her to go home every time they slept together. So move in he did, and it soon came out that he was a total (and pretty chauvinistic) mama’s boy. None of this was a surprise – in fact, it was pretty predictable – but it was still funny.

While the storyline did deliver a lot of laughs, the fact that Howard was quickly back at home with mommy has left me wondering about the future of his relationship with Bernadette. I like Bernadette, and I want her to stay on the show. But after a failed attempt to live together, how can their relationship ever progress? I would have rather seen Howard and Bernadette actually stay living together. None of the other characters are in serious relationships, so it would have been nice to see one of them take that leap. And watching Bernadette try to teach Howard some independence would make for fresher comedic material than the recycled jokes we get when Howard interacts with his mom. (Though I did laugh at “fancy new sex diseases”.)

Although I liked Howard and Bernatdette’s storyline, the other plot was definitely stronger. Raj’s sister Priya was back in town, and Leonard immediately showed up at his apartment to try and repair things after she stomped on his heart during her last visit.

Leonard’s attempt was successful, and he and Priya decided to see each other again – despite Raj’s frequent attempts to forbid them from doing anything. I loved seeing Raj revert into a traditional Indian role, and the romance had some hilarious side effects – Amy Farrah Fowler.

Amy heard about Leonard and Priya and immediately paid a visit to Penny to console her. As great as Amy’s relationship with Sheldon is, she really shines with Penny. (Much like Sheldon himself, really.) She tries SO hard to be a good best friend to Penny that she actually has kind of succeeded. Penny insisted she was fine, but Amy knew better – even going so far as to spell out for Penny why she should be upset.

Eventually, Penny broke down and admitted she was upset over Leonard and Priya, and Amy took advantage of her sadness to learn how to make monkeys cry. All in all, it was a fantastic episode.

Now, check out these highlights: