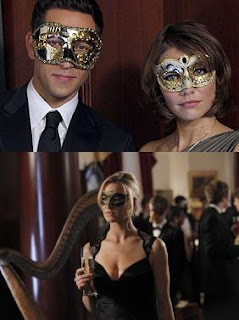 On last night’s episode of Chuck, we kissed one of the show’s best relationships goodbye…Chuck and Morgan ended their relationship as roommates.

It was time – with Morgan and Alex getting serious, and Chuck and Sarah about to be married, things were getting a little…crowded, as evidenced by the Valentine’s Day debacle.

But amid the drama of dividing up collectible Star Wars toys and making sure Casey doesn’t kill Morgan for breathing weirdly and heavily with his daughter, the team had a case to handle. Someone was trying to track down Alexei Volkoff’s successor, and they had to get to her first.

I kind of expected a twist at the end of the episode revealing that Volkoff’s daughter knew her father’s true identity and her role in his legacy the whole time, but the show made a much more interesting turn – now that Vivian, Alexei’s daughter, had learned of her father’s intentions, will she follow through? After a lifetime of being hidden away, it looks like she just might try to follow in his footsteps.

While Chuck and Sarah were taking the lead on getting to Vivian before the enemy did, Casey was contemplating if he’d run his course as a part of their team. After all, it must get tiring having to play bartender every time they go undercover. He saved Sarah’s life when she got knocked off her horse, but a mysterious offer to lead up his own team – right there in Burbank, so he wouldn’t have to leave his daughter – must be very tempting. On the one hand, I want Casey to take the gig so that he can have an interesting storyline. On the other hand, I don’t want him to leave Chuck and Sarah.

Meanwhile, watching Ellie and Awesome cope with the exhaustion of new parenthood provided some great comic relief. Of course the only thing that would calm their baby to sleep was the soothing sounds of Jeffster. Probably because those were the first sounds Baby Clara heard when she came into the world.

All in all, I’d say this episode was a smashing success. The moments between Chuck and Morgan were really touching, and we were left with a lot to think about when it comes to upcoming episodes. What will become of Vivian Volkoff? Will Casey leave the team? Will Morgan be reprimanded for calling General Beckman “G.B.”?

Now, check out a couple of my favorite quotes from “Chuck vs. The Masquerade”: