Time for a little lesson in responsibility, Grey’s fans! On the most recent episode, Meredith told us that doctors have to act with such responsibility in their profession that the rest of their lives are trainwrecks. I don’t know if I buy that theory, but for the sake of this show I’ll go with it. 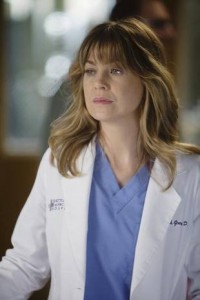 Babies are seriously on the brain at Seattle Grace lately, and this week was no different. Arizona and Mark argued over whether Callie should have an amniocentesis test, Meredith realized that her fertility drugs were affecting her vision, and Cristina and Owen argued over whether they’ll ever have kids.

I felt really bad for Meredith. She really wants to have a baby, and the fertility drugs may be her only chance. The problem with her vision was deeper than the ways it affected her career – it was dangerous to her health. It’s looking more and more like adoption might be the best choice for Mer and Der. Do you think they’ll ever discuss it? 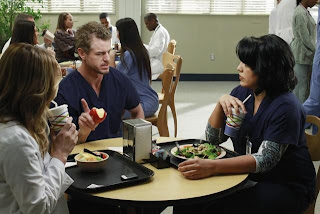 The other baby dramas were a little less clear (or more clear, I guess, if you’re referring to vision). I feel bad for Mark in his situation. He’s being a supportive dad-to-be and will probably make a great father, but he’s in a situation where he’s not necessarily going to get that chance. I also feel bad for Callie, who’s completely stuck in the middle. Arizona used to be one of my favorite characters, but ever since she left for Africa without Callie she’s been selfish and annoying. She needs to figure out a way to accept that Mark is the father of her child and a part of her family. Otherwise, she needs to leave.

Also complicated was Cristina’s situation. She told Owen she never wanted to have kids, but he assumed she’d grow out of that mindset since that’s how everyone feels when they’re a resident. Not really fair of him, and if you ask me, an indicator that their marriage was definitely rushed. But on the other hand, Cristina could have at least agreed to have a discussion about it. Or agreed to have a discussion about it in a few years. But Cristina is stubborn and a bit selfish, and Owen knew that going in. 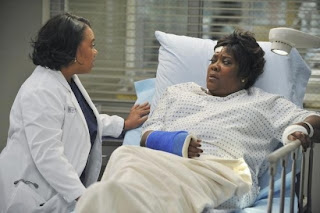 We revisited Alzheimer’s in a few ways this week too, and both stories were pretty heartbreaking.

The Chief’s wife, Adele, had another fall and again couldn’t remember the details. I loved how Bailey thought it might be substance abuse. Luckily, she went to Meredith to get the full story and spoke to the Chief, convincing him to have Derek take a look at Adele. Chief was kind of a jerk to Meredith last week, but it’s sad to see him have to go through this. Denial is natural.

An even sadder story, though, was the family participating in the Alzheimer’s clinical trial. The family was stretched thin, and in the shuffle they forgot to make a medical appointment for their son, who had a lump in his throat. It was a cyst, and it was dangerously close to cutting off his airway. When Stark found out, he demanded that Arizona call Child Protective Services on the parents. 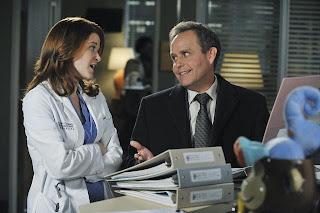 I really liked this storyline, because even though Stark was being too by-the-book and quick to act, he had a point. For Arizona, Meredith and April to pass on calling Child Services they needed to be sure that the child wasn’t in danger. What was most interesting was that April was actually able to change Stark’s mind. What was most terrifying was that her intelligent argument inspired Stark to ask her out. And she said yes! Which leads me to…

…the other medical case of the evening, which led to the much anticipated hook-up of Avery and Lexie. But let’s start with the medical case.

Teddy was about to do a lung transplant on a patient with Cystic Fibrosis when they discovered that his girlfriend also had Cystic Fibrosis…and apparently that’s bad. I had no idea that patients with Cystic Fibrosis weren’t supposed to be around each other, but a bit of light Googling tells me it’s true. So, the patient had a choice – the lungs, or his girlfriend. Of course, the obvious choice was to lie – and once the transplant was successful, Lexie found the patient’s girlfriend waiting outside the hospital. Lexie explained to the girl that she’d be killing her boyfriend by staying with him, wasting his chance at a life. And she promised they’d find other people. Since this is Grey’s Anatomy, her sage advice had to resonate in her own life as well.

Lexie was second-guessing her break-up with Mark after hearing him say he’d be happy to raise a special needs kids. The thing is, would Lexie be? As Avery aptly pointed out to her, Lexie wouldn’t just be dating Mark. She’d be dating Mark, two chicks, and a baby. That’s a lot. And then he told Lexie he was first in line for when she was open for business again.

That comment, of course, led to the two of them in the shower together. Interrupted briefly by a panicked April, fresh off accepting a dinner date with Stark. How do you guys feel about Lexie and Avery? I’m happy for Avery, but I don’t know if Lexie is quite the right girl for him. I don’t think she’s over Mark yet, and…does it make me a totally horrible person if I say I think he’s too good for her?

What did you think of the episode? Are you looking forward to April’s date with Stark? I think he’s acted like too big a jerk to ever be redeemed, and while I’m interested to see where the storyline goes, I most definitely do not want to see April lose her V-card to that guy. Do you think Arizona will stick it out with Callie and Mark? Is there trouble in paradise for Meredith’s professional life, or Cristina’s personal life? And did you love this conversation as much as I did?

Cristina: Men leave wads of toothpaste in the sink. And when you have your own sink, you don’t have to look at it. All dried and congealed and filled with their fossilized oral bacteria.
Meredith: I leave toothpaste in the sink… You’re supposed to rinse it every time you brush?
Cristina: Nobody parented you. This is to be expected.