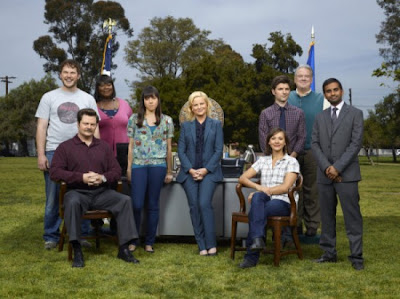 There are few things as funny as witnessing the embarrassment of someone else. The two victims on Parks and Recreation this week? Ann and Tom.

Poor Ann. Chris is so perky and positive that when he dumped her, she thought they were having a great conversation about the future of their relationship. Really, it can’t get worse than that. Except that his weird behavior since moving back to Indianapolis made Ann suspect he was cheating on her. Since Leslie was in Indianapolis for some lame-o but totally amazing to her government thing, she offered to snoop around for evidence of a secret other girlfriend.

And evidence there was – a women’s razor and a pink shower cap. Ann drove down to confront him, and in front of both Leslie and Ron, realized they had broken up. And the two pieces of evidence actually belonged to Chris. He shaves his legs for swimming and men’s razors just don’t do the trick, and the swim cap was part of a breast cancer race in which he places fourth.

Meanwhile, Tom tried to pitch his fragrance “Tommy Fresh” to some sort of visiting fragrance emperor, and it completely blew up in this face. I especially liked how the disaster helped grow his friendship with Ben, who even went so far as to pour Tom’s cologne into the guy’s car. Considering the dry-heaving it caused him, I’d say that’s the move of a real good friend.

In keeping with the disappointing tone of the episode (for them – for me the episode was anything but disappointing) Ron was crushed to discover that his favorite restaurant in Indianapolis had closed. And worse, rather than grilling a few steaks at home, Chris threw some portabello mushrooms on the barbecue. The horror!

April and Andy’s little subplot was funny too, and showed what a perfect couple these guys make. They spent the night at Tom’s club in a competition to score the most free stuff, but in they stealthily returned all heir hard earned tip money to the actual tips jar.

What did you think of “Indianapolis”? Were you disappointed to find out that Ann and Chris have broken up? He’s a series regular on the show now, so how will he end up back in Pawnee? Will they reconcile?