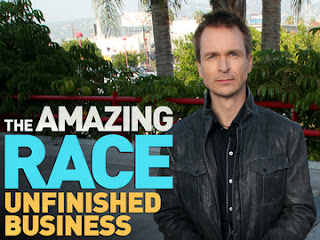 I have to say, I’m not thrilled with how the first two episodes of The Amazing Race: Unfinished Business were executed.

The way I see it, two teams made errors that set them back in the first episode. Amanda and Kris were the last to figure out that first puzzle (Qantas Airlines) and got stuck with a U-Turn. The cowboys took forever to solve a puzzle and ended up last at the first “pit stop”, where they were told the continue racing. The difference? The cowboys’ reaped the benefits of an equalizing charter flight, but Amanda and Kris didn’t have any opportunity to catch up after completing both Detours. The odds seemed stacked against them, and their elimination was inevitable. If you ask me, it was a little unfair and it was definitely poorly designed.

The teams had little to go on after their brief visit with Phil at the beach. Their clue was “To Sail To Stop” and would lead them to an anchor at city hall – if they could figure it out. Once again, the teams worked together like mad. Smart teams hunted down an available computer, and others lucked out and got directions from a knowledgeable passerby.

Early on, I was feeling concerned and a little heartsick for Mike and Mel. Mel wasn’t doing too well, and Mike was brought to tears with worry for the health of his 70 year old dad. Admit it, your throat felt a little tight too when Mike said “I don’t want to kill you for some joy ride.” Right?

Once teams found the anchor, they had to sign up for one of two charter flights…that wouldn’t take off until the following morning.

Meanwhile, the cowboys stopped muttering “Son of a buck” for long enough to figure out that dang “I’m between the devil and the deep blue sea” clue, and they made it to the sign-up sheet hours behind everyone else. But since the flights weren’t scheduled to depart until the morning (and because these guys were born with horseshoes in their cowboy hats) their slow start didn’t hurt them at all. 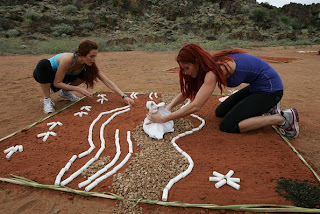 With all the teams so close together after flying to the outback, the stakes were high. The teams had to choose between two Detours – “Spirit World” or “Natural World”. I immediately shouted out “Natural World”, thinking that spitting some colored water on your own hand would be a lot easier than setting up a complicated mosaic made of pebbles and dancing on it, but all the teams selected “Spirit World”.

Kynt (or is it Kent now?) and Vyxsin finished their mosaic first, but for some reason Kynt thought children needed to be involved in their dance, or needed to teach them the dance, or…something. Anyway, it resulted in Kynt hilariously shrieking “I need you to go get children! Vyxsin, get me children! Children!” Honestly, could anything be more hilarious than a scrawny little goth dude screaming at his pink-haired girlfriend to bring him children? This is why I watch The Amazing Race.

While Kynt was getting himself accidentally put on one of those lists that mean you can’t live near playgrounds, other teams correctly danced atop their mosaics. From the look of it, any dance at all would do. I think I saw Mike doing the “Single Ladies” moves.

The whole Detour was pretty chaotic, with lots of shirtless people running around, throwing rocks and dancing like fools. Before you knew it, everyone had left except for Ron and Christina and Amanda and Kris.

Amanda and Kris had good reason for still being there – after dancing on their mosaics, they still had to go spit paint on their hands. But Ron and Christina? They were just a mess.

When the pair finally finished their task, Christina looked down to discover that Ron had inexplicably dumped all their belongings on the ground, leaving what Christina called “a market”. She scooped up the stuff and ran for the car as he ran around like a chicken with its head cut off looking for his hat. As they took off for the next task, Amanda and Kris were very close behind – just as I’d thought, the other challenge hadn’t been very hard.

Zev and Justin definitely solidified their identities as cutthroat players when they noticed that Margie had lost one of her kangaroo feet on the way and didn’t say anything. Personally, I was glad they let her go back looking for it. With all the teamwork going on this season, it was nice to see someone actually want to take another team down.

Speaking of teamwork, I’d like to see either Margie and Luke or Jamie and Cara get eliminated soon. They worked together until the bitter end in their previous season and I don’t want to see that happen again. Maybe it’s just because I don’t find either team particularly likable, but I just hate the idea of them using the buddy system to get to the end. Margie/Luke/Jamie/Cara teamed up with Kynt and Vyxsin this time, because Kynt got an A in chemistry and knew what elements from the periodic table to look for.

Zev and Justin landed in first place and, lo and behold, actually had their passports this time. If they can keep their stuff together (literally, all that paperwork and whatnot), they could win this thing.

My boys the Globetrotters came in second, as charming as ever despite not getting a ton of screen time. The cowboys landed in third, followed by Kisha and Jen, then Margie and Luke, Mel and Mike, Kynt and Vyxsin, and Jamie and Cara.

The Jekyll and Hyde of Father/Daughter Relationships 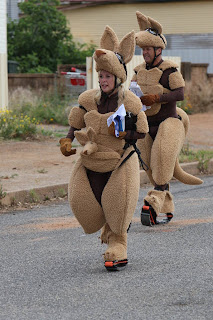 Could producers have come up with a better foil of father/daughter relationships than Gary and Mallory and Ron and Christina? While Ron is unreliable and critical, Gary is solid and encouraging. While Christina is tense and reserved, Mallory is a bubbly ball of energy. Their personalities and relationships could not be more different.

This episode made it clear that Ron hasn’t changed a bit since the first time he ran the race with his daughter. The only person he was more critical of than Christina was Mallory, as the two teams worked together to try and beat Amanda and Kris. As Mallory started to skip (because I feel like she skips everywhere) up a road saying it was where all the other teams had gone, Ron scolded her saying “We don’t follow the crowd, Mallory! We have to think why they were going that way.” Um, gee, maybe they were going that way because that’s where the clue is?

Despite being “hysterical” (and I don’t think Ron meant that in a good way) Mallory et al made it to the next clue. Ron and Christina decided not to follow Gary and Mallory to the pit stop since Ron hates Mallory, but the joke was on them – the likable father/daughter team ended up in ninth place, with their unlikable counterpart squeaking into tenth. 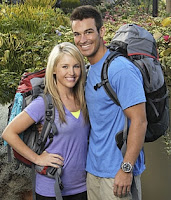 Even though I didn’t really care about Amanda and Kris, I felt bad for them. The was these past two legs were designed did not work in their favor, and they never really got a fair shake. Had they performed the U-Turn in the first leg, they still might have come in ahead of the cowboys and would have had the same opportunity for a comeback that the cowboys took advantage of.

That said, I’m still happy with the Race so far. My favorite teams seem to be doing well, and the clips from next week look like there are good things coming. What did you think of the episode? Did Amanda and Kris get a raw deal?