Oh, American Idol, you’ve really messed with me this season. By changing nights and airing against Survivor (and ANTM) you’ve really screwed up my life. That means I missed most of Hollywood week and went into Tuesday night’s episode with the top 12 guys only recognizing a few of them.

Tonight was the telling moment – how much would we miss Simon? Luckily, Randy stepped up as the voice of reason and gave a few singers some serious critiques. Steven and Jennifer? You’re going to need to be a little tougher. Now, let’s talk performances. 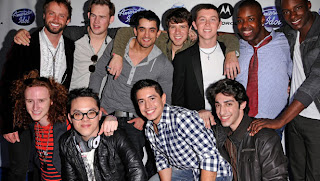 Clint Jun Gamboa – Superstition
Really, Clint? You decided to start off the season (or the live season, anyway) with a karaoke song? I love Stevie Wonder a lot, but any time someone attempts his tunes on American Idol they end up sounding really cheesy. I couldn’t believe all three judges liked this! Simon? I miss you already.

Jovanny Baretto – I’ll Be
Really, Jovanny? You want to be that guy? The guy who sings this kind of song? “I’ll Be” is a Hollywood week song to me. It’s a great way to show off your voice with an a cappella arrangement, but it’s not the right song for introducing yourself to America.

Jordan Dorsey – OMG
On the one hand, I’m really glad Jordan chose a recent, fast tempo song for his first performance. It was a great way to set himself apart from the rest of the cheesy, karaoke singing pack. On the other hand, it didn’t really show off his talent. From the little I saw of Hollywood week, I know Jordan is a better singer than that.

Tim Halperin – Streetcorner Symphony
This was the first time I saw Tim perform, and I was not impressed at all. The song was just a weird choice, and he didn’t sound good by any means. The judges all seemed disappointed, so folks who’ve been watching all along – is he better than this?

Brett Loewenstern – Light My Fire
Despite the hairography, Brett was the best so far when he hit the stage. I liked the kid in Hollywood week and I think he has a really good voice. I enjoyed his performance and I’d like to see what else he can do.

James Durbin – You’ve Got Another Thing Coming
At least, I think that was the song. That’s what the Twitterverse told me it was. Every time I see James, I am reminded of Degrassi: The Next Generation. Don’t ask me why, that’s just the way it is. A lot of people liked James, but I just don’t like this guy. He seems like an Adam Lambert wannabe, but with less talent and flair. He just seems…affected.

Robbie Rosen – Arms of an Angel
I give Robbie a lot of credit for choosing a song done by a woman and by showing some creativity with the arrangement…but oh MAN, was that performance brutal. Was he nervous? He sounded nervous. And out of tune. It was bad. How could Steven Tyler call that beautiful?

Scotty McCreery – Letters from Home
I can’t really judge this guy. I like a couple country artists, like Carrie Underwood and Taylor Swift…but generally, it’s lost on me. Scotty definitely has a beautiful voice, if you’re into that. I’m just not. But I’m sure he’ll get a lot of votes. Grandmothers and people serving in the US military are sure to love him. Also? I’m totally shocked that THAT voice came out of a kid so young.

Stefano Langone – Just The Way You Are
While I don’t think Stefano’s version of this song measured up to Bruno Mars (who I absolutely love), of the crowd that performed on the Idol stage he was one of my favorites. He has a really sweet quality to his voice, and I want to see where he’ll go with so much raw talent. This is a kid who could be on the radio.

Paul McDonald – Maggie May
FAVORITE! Adorable. Quirky. Cool. Tuxedo jacket. Steal my daddy’s cue and make a livin’ out of playing pool. Fun. Dancing. His smile. The tone of his voice. Seriously, I liked this guy SO much that I couldn’t even manage to describe him in full sentences. I jusy want to take him home so he can come to karaoke with me and his friends and delight me with his adorable quirkiness. He’s original and I love him.

Jacob Lusk – A House is not a Home
Hmmm. Jacob’s intro package really raise my expectations, and his performance ended up disappointing me a little. Yeah, he’s definitely talented. I want to see him again. But the vibrato was a little too much and he didn’t always sound like he was on pitch…I don’t know, Jacob just fell a little short of the expectations.

Casey Abrams – I Put a Spell on You
I didn’t know Seth Rogan circa 2008 auditioned for American Idol! In all seriousness, though, I liked this guy. He needs to shave, but he was different and cool and is most certainly talented. There was a touch too much shrieking for my taste, but I’d like to see him again.

Overall, I wasn’t blown away by the performances but there is definitely some potential. My favorites were Paul McDonald, Brett Loewenstern  and Casey Abrams. But I also like what I see in Jordan Dorsey, Stefano Langone and Jacob Lusk. What did you think? Any early favorites?