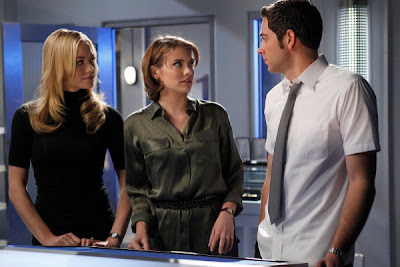 A sexy bank robbery? Wedding planning? A young, innocent woman’s turn to the dark side? Morgan? What wasn’t to love about last night’s episode of Chuck?

Actually, there was one thing I didn’t love. All that crap about a Renaissance Fair? What was that? Why was that a part of this show? I’ve never been as big a Jeffster fan as most Chuck lovers, but I do try to keep an open mind when it comes to their storylines. So people who DO like Jeffster, please tell me – was I missing something? Was there some hilarious reason that Jeff and Lester trotted Renaissance Fair people into respond to Morgan’s roommate ad?

Kings and jesters aside, I like watching Morgan try to make it on his own, and I love the idea of Morgan staying with Casey. Do you think he’d consider moving in with Alex? I know the couple hasn’t been together long, but they seem perfect for each other. Do you think they’ll take it to the next level any time soon? Maybe once Chuck & Sarah have tied the knot?

Speaking of Chuck and Sarah tying the knot, I liked watching Sarah try to deal with all the wedding plans. Once she found the dress, she really got into it…and now she’s turned into a bit of a Bridezilla. I liked that twist, because it was unexpected but still seemed like Sarah. It was almost like she was treating the wedding as a mission.

The meat of the storyline revolved around Volkoff’s daughter Vivian, who was working with the team as an asset. Chuck promised to get her a meeting with her dad and he meant it, but Beckman and the bigwigs went back on their word. Vivian doesn’t trust Chuck and the CIA now, and instead has followed her dad’s sinister lawyer over to the dark side. Will she reestablish her father’s company? Will she end up in some kind of danger instead? I like Vivian, and there’s something about the actress portraying her that I find interesting. I’d like to see her find her way back to the CIA and work with the team for a longer period of time. She’s proven that she could make an excellent spy.

Meanwhile, Casey is working on a super secret spy mission and Morgan accidentally found out. Where is this going?

Overall, I really liked the episode. The scene where Sarah and Chuck discussed details of their wedding while kicking ass as bank robbers felt like classic Chuck. Now check out these favorite quotes and moments, because Morgan had some funny lines this week: