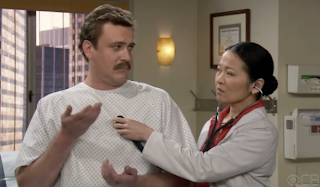 I’m not sure how to feel about last night’s episode of How I Met Your Mother. I didn’t dislike it. It had some good jokes and some nice, heartfelt moments. And Zoey wasn’t around, which was nice. But there was a slapstick quality to it that just didn’t sit well. I think where it really went wrong for me was when the doctor told Barney that his heart had “literally skipped a beat” at the exact moment Nora showed up for their date.

That said, it’s not like I thought it was a terrible episode. There were lots of good things about it, and I liked how the ending was done – Barney imagining himself walking up to Nora having brunch with her parents and telling her the truth, that he likes her and is confused, when really he just watches her through the window for a moment and leaves.

After all Barney went through, this can’t be the last we’ve seen of Nora. Lily called him out on the truth – he didn’t lie to Nora when he said he wanted kids, he lied when he told her he’d said all that stuff just to get in her pants. I believe that Barney could consider settling down with this girl, but I’m curious about what the show would be like with Barney retired as the biggest playa in New York.

The thing is, I think it points to the conclusion of the show. I’ve made it no secret that I’m ready to meet the mother. I think timing wise, it’s time. I feel like we’re heading into the last season or two of this show. I like HIMYM and I want to see it go out with a bang, not fizzle. Seven or eight seasons is a good run, and I don’t want it to have to rush an ending when the ratings drop. I’d like to think we’re in the home stretch now, and that makes Barney settling down a good idea. But if we’re not in the home stretch? Then I don’t know if the show is ready for it. All the other characters are either settled or looking to settle. If you add Barney to the list of people in a happy relationship, the show could get a little dull.

My favorite moment in the episode was when Barney threatened to expose dirt on everyone if they let Nora know about the real Barney Stinson. Especially how Ted couldn’t care less about people knowing he took a ballet class or went to an N’Sync concert…I’m dying to know that thermos story, though.

The little subplot, where Robin started dating a young guy named Scooby who was exactly like a dog, was pretty funny. The rapid fire way the gang dished out dog references was great, and I loved Marshall, Lily and Ted eating a bunch of “sandwich” brownies with him. Plus he’s from Labrador in Canada, and I get excited any time Atlantic Canada gets a shout out.

What did you think of the episode? Can HIMYM survive with a happily committed Barney? Do you think the show is about to run its course, or can you see it going on for years? Plus, check out a few highlights: