This week’s episode of America’s Next Top Model started off on a weird note. The girls were sitting around the house chatting after panel, and one girl asked Ondrei if she had any siblings. Turns out she had two brothers that died. One in a car crash, and another that was murdered only months prior. It’s hard to know how to respond to something like that, but I felt a little uncomfortable with the way the other girls voiced their surprise that Ondrei was in the competition. Not really their place, right?

Next, Tyra and a chef came to talk to the girls about guilty pleasure foods, which include spaghetti and meatballs and peanut butter. What about raw chicken? Is that a “cheatie”? Because immediately afterwards the girls got into an argument when Alexandria left some raw chicken in the fridge in a cereal bowl. Was Dalya right, is that totally unsanitary? Or is it just gross, and she overreacted? Either way, it was fun to see Jaclyn look like a deer in headlights as she watched the dramz ensue.

Next, the girls were introduced to an acting coach who told them all about that voice that says they’re not good, smart or pretty enough. Yep, it’s Nigel Barker your inner critic! For an acting coach, this felt an awful lot like therapy. One girl talked about how grateful she was for her adoptive parents ever since she met her birth mom. And then everyone drew pictures of Nigel their inner critics.

OK seriously, how weird, uncomfortable and kind of unhealthy was this? What the hell? Who is a freakin’ acting coach to pretend to be someone’s birth mom and say “I didn’t have to give you away”? Then things got really sad when Ondrei sobbed at her photo about how the men in her life weren’t there for her anymore. Um, really? This girl has had TWO brothers die, at least one of them very recently, and she has to go through a cheesy pseudo-therapy session, on camera, all in the name of being a better MODEL? Are you KIDDING me? (Yes, I was so weirded out by this “acting” session that it deserves both caps and italics.)

After “acting class” was over, poor little Ondrei was a mess. And no wonder! They brought all these difficult feelings to the surface and then did nothing about it. Sorry, ANTM, but if you’re going to go through ludicrous exercises like the one on the episode, you should also be offering the girls actual counseling. Because otherwise it’s just voyeuristic and damaging. (I realize I am technically the voyeur in this situation, but what am I going to do? Stop watching? Blasphemy!)

For the photo shoot, the girls headed to my Room 101 – they’d be covered in bees for the shoot. Bees! Not only am I mildly allergic, but I like to pretend I’m deathly allergic because I am TERRIFIED of bees, wasps, etc. Oh, but the girls didn’t need to worry – although they had pheromones all over their bodies, they had cotton stuffed in their noses and ears to stop the little buggers from actually entering their bodies.

When Jay gave the critique that Sara didn’t look comfortable in her own skin, I almost lost it. Um, really Mr. Jay? Do you think maybe she was uncomfortable because there were 60 bees crawling all over her? Honestly, I would have been hyperventilating in a corner with a sweater pulled over my head in this situation.

Hannah cried during her shoot, but luckily it wasn’t an ugly cry. Ondrei sort of bombed the shoot, and Jay said that the wall they’d worked to bring down had actually gone up. Gee, Jay, do you think it’s because she was a little distracted thinking about the death of her brother? Do you think that has something to do with the “acting class” y’all had?

Ondrei considered leaving the competition and Monique had little sympathy, wondering why she’d shown up in the first place. I’d say something about confusion and conflicting emotions, impulsive decisions and trying to move on, but unlike a few acting coaches I know, I’m actually not a therapist. 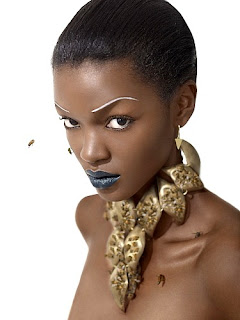 As soon as panel began, Ondrei told the judges that she wasn’t able to continue on in the competition. Thankfully, the judges were understanding about her situation. Ondrei is a gorgeous girl, and I’d like to see them offer her the chance to re-enter when she’s ready. Tyra told the girls that they’d be saved from elimination only if Ondrei had the worst photo that week. So let’s talk about the shots.

I usually talk about each photo individually, but I didn’t have much to say about these. I didn’t love the styling for the shoot, and the bees freaked me out. I thought Britanni, Hannah and Monique really stood out. When we saw Ondrei’s photo I loved it, even though she’d struggled during the shoot. But as for who I thought deserved to be eliminated? Probably Dalya for only having one good blinking shot, but I wasn’t sure. 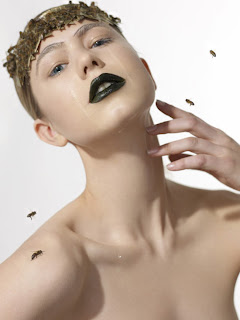 My girl Hannah got called first, and I was thrilled. I think she’s so adorable and quirky. Next was Britanni, Monique, and all the other girls until just Dalya and young/old Nicole were left. Neither girl looked like a winner, so I didn’t really care who went home.

In the end, Dalya got to stay and Nicole was sent packing. But next week? MAKEOVERS, bitches! Some of us cry over bees, others cry over weaves. It takes all kinds! Can’t wait. How about you?