Modern Family is pretty much always fun, but this week it was funny AND poignant. Have we seen the show tackle issues as deep as the idea that Gloria could remarry when Jay dies, and the serious issue between Mitch and Cam over Lily’s last name? “Two Monkeys and a Panda” was funny, heartfelt, and one of the best examples of why Modern Family is so successful as a show. 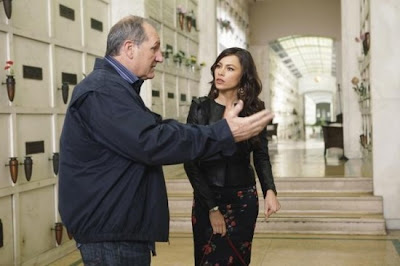 First, let’s talk about Jay, Gloria and Manny. Their storyline started out as funny, with Jay’s delight and Gloria’s disgust at the crypt he’d picked out for their afterlives. I’m with Gloria, the place was just plain creepy. But it also brought to light an issue that is completely true and a little uncomfortable – Jay is going to die well before Gloria. He’s at least, what, twenty years older than her? And not as healthy. It’s natural that she would remarry, even if she says now that she wouldn’t.

And Jay wants her to be happy. His fear, which he put so eloquently, is that although he always thought he’d be the main event and the next guy would be the putz who could never live up to him, what if he was the putz? What if the third (!) guy was the main event? Who would Gloria lay next to for all of eternity.

Manny was the one who put Jay’s fears to rest, and it was possibly one of the most touching moments I’ve ever seen in a half hour sitcom. He described to Jay the lengths that other men had gone to for Gloria when she started dating again. How handsome men, rich men, all men had chased after her. Yeah, Jay has money. But he was nervous and sweaty (he’d just come up all those stairs!) and Manny thought he didn’t have a shot in hell. But Gloria fell for him after their first fight, and told Manny she’d finally met her match. That? That’s true love.

Jay’s conversation with Manny basically put into words what makes Modern Family work so well. You could assume that Gloria is a coal gold digger and just married Jay for his money, or that Jay just married Gloria for her…other assets. And there are a lot of easy jokes that could be made with that premise. But the idea that they really love each other, and that their marriage is happier and stronger and more right than either of their previous marriages, makes this so much more interesting.

Jay’s solution to the problem, which was to be cremated, stuffed into a coffee can and put on the mantle so he can make the putz uncomfortable, was the perfect way to wrap up the storyline on a funny yet sweet note. 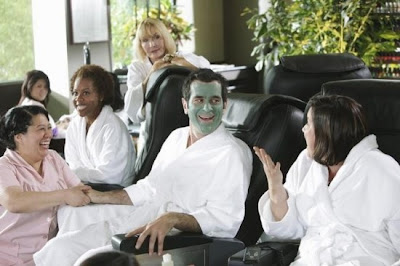 Even though Claire and Phil’s storyline was the most lighthearted of the episode, it still dealt with real family issues and relationships in an interesting way. I think anyone who is a mom to daughters or a girl with a sister could relate to Claire’s desperate attempts to have Haley and Alex get along. Since Claire is the Type A personality in her marriage, she ends up with a lot on her plate. She was feeling overwhelmed with trying to avoid a conflict between Haley and Alex while dealing with some judgey PTA mom, while Phil was at the spa.


But Phil’s time at the spa wasn’t wasted. He learned an important lesson from the ladies there – always always agree with your wife when she complains about something. She hates the waiter? He’s a jerk! She’s being bossed around by someone from the PTA? What a bitch! Agree, agree, agree.

So many of Phil and Claire’s storylines revolve around her being uptight and him being a doofus, so it was nice to see how this played out. We got a look at why Claire is so stressed, and we got to see Phil be a really good husband. Plus I’ve always liked how Haley and Alex play off each other as polar opposites, so with that added bonus I’d chalk this storyline up as a major comic win. (Should I make a #winning joke here? Too mainstream? Is Charlie Sheen even still funny? Or alive?) 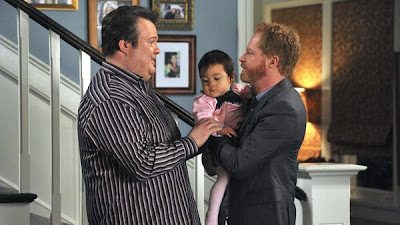 The most emotional storyline this week, I thought, came from Mitch and Cam. I always like when a show highlights a real issue in a relationship without making us feel as though the characters could break up or are unhappy. It’s something that Friday Night Lights mastered with Tami and Eric Taylor, and I’m glad to see Modern Family do it in the comedy format here.

Cam noticed that on Lily’s adoption papers her last name was Micth’s, Pritchett, and her middle name was Cam’s, Tucker. He was furious over the error, and then accused Mitch of doing it on purpose. The problem was, he had.

Mitch screwed up, big time. It was a terrible thing to do. But, as we learned, Cam had been a giant ball of nerves leading up to the adoption. I really felt for Mitch when he confessed to Cam that he’d been terrified Cam would leave them. We see Cam being such a good parent to Lily all the time, so it was comforting to know that a) He wasn’t always like that and b) Mitch had no problem raising Lily on his own – but he was worried the name would be a reminder of the man who’d left them.

The thing is, neither of these guys will ever leave each other. And now they know that. The way Mitch resolved the issue, but writing the pro-gay adoption story “Two Monkeys and a Panda” that Cam had been working on, was incredibly touching. I might have made a really sappy almost-gonna-cry face when Mitch said the scared monkey became the brave one. Maybe.

The sad, sad storyline was contrasted by Cam’s hilarious (and succesful!) attempt to make Lily associate the word “adoption” with positivity by regularly saying it and clapping. And nothing was cuter than seeing Lily actually clap when she heard the word. It was great to see Mitch and Cam work through a serious issue, still deliver clever one-liners, and come through it with their relationship stronger than ever.

This is more than I usually write on Modern Family, but I really do think the episode was a particularly strong one. I like a lot of half hour comedies, but I think of all the ones I watch right now Modern Family is the one that most people can relate to. If you haven’t watched, I think you should start. If you do, were you as impressed with this episode as I was? Now, check out my favorite moments and lines: