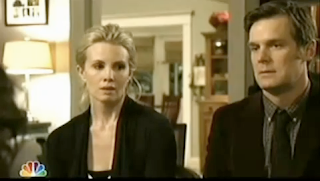 Parenthood was so good last night it was painful. My heart was in actual physical pain from the moment Adam and Kristina sat down with Max to talk to him about Asperger’s. The episode was just so damn good, and the episodes have been just so damn good for weeks that I’m tempted to sneak this recap into the middle of an American Idol post just so people will listen to me when I tell them how really damn good it is.

I’ve given Kristina a hard time since the very beginning of Parenthood. Her character can be shrill, high-strung and grating. But while I don’t know if I’d want to be her BFF in real life, I do love her as a character. There are people in the world who are shrill and high-strung and grating, and just like Kristina they are also good people. But what I love about Kristina is how great she is with Max. She has, from the beginning I think, handled the Asperger’s thing better than Adam. Remember back when Adam treated Gaby just like a babysitter, offering to pay her overtime and griping that she wasn’t making enough progress with Max? Oh, the cruel irony. Kristina, on the other hand, has done a better job of listening to advice from doctors and behavioral aides and has been a true champion for her kid. Yeah, she’s a fictional character on the talking screen in my living room. But I admire her.

It’s difficult for me to relate to Adam and Kristina telling Max he has Asperger’s Syndrome because I don’t have kids, let alone one with Asperger’s. But I will say, with that first conversation my worst fears for this situation came true. As I’ve mentioned before in the blog, I was worried Max would find out about his Asperger’s in the wrong way since the episode where he did a fun run for “those kids with autism”, not really knowing why he was there. I worried he’d overhear someone say he had Asperger’s (which ultimately happened) or that one of his young cousins or a school mate would tell him. There were a lot of ways it could go horribly wrong, and I’d been waiting for the shoe to drop.

Once the shoe dropped, Adam and Kristina were incredibly unprepared for what came next. I’m not judging them here – I get it. They’ve only known about Max’s diagnosis for a little over a year. They’re still learning how to deal with the everyday challenges they face as a family and haven’t had a chance to think about when or how to tell him. And it terms of storyline, I think it is much more real and raw that Adam and Kristina weren’t prepared for this. But because they ended up in a situation where they had to talk to Max before they were ready, their first conversation with him ended up going poorly. Kristina was crying. Adam called Asperger’s a disability. And poor Max was left feeling completely alone.

Meanwhile, Crosby was failing miserably in his damage control with both Jasmine and Adam. I like Crosby, but I wouldn’t forgive him either – especially if I were Jasmine. He’s gotten himself into a compelling situation, though. He’s screwed up so badly that he has no idea how to fix it. Apologies aren’t enough, and the people who are angry at him don’t even want to hear what he has to say. You can’t blame them, but part of me feels bad for Crosby who knows he’s made an irreversible mistake.

This rift between Crosby and Adam could make for  very interesting storyline, though. When shows thrive off relationship drama only, they can feel a little stale. What I like about Parenthood is that it provides a lot of opportunities for conflict without having to rely solely on breakups and romantic relationships. While I think Crosby’s actions hurt Jasmine more than Adam, and I think she has much more reason to be mad at Crosby than Adam does, the consequences Crosby is experiencing with Adam are more interesting, in some ways, than the consequence on his relationship with Jasmine. Adam and Crosby are so different, in good ways and bad. What happened has brought Adam’s harsh criticisms of Crosby to light, and it will be interesting to see how they can recover from that.

It was pretty heartbreaking to see little Jabbar ask Crosby why he’s living on the boat. Part of me wants Crosby to make things right with Jasmine for him, but another part of me doesn’t – I think he rushed into an engagement with Jasmine for Jabbar, and I don’t think doing the same thing a second time is a good idea. Is a marriage for those two still in the cards, or are they better off co-parenting as separate people?

I really commend the show for the way each character has reacted to Crosby’s situation perfectly in character. Adam is angry, and (justifiably) judgmental. Zeek and Camille are going too easy on him. Sarah still loves him, but is brutally honest. Julia wants to help fix things. Joel is disgusted.

It was particularly  interesting to see Joel and Julia have to deal with the breakup of Crosby and Jasmine, since their kids are about the same age. They’d planned a sleepover for Sydney and Jabbar so they could enjoy an anniversary dinner, but they didn’t know if they should cancel or not. As Julia pointed out, canceling could suggest they were taking Crosby’s side, and she was really mad at him over what he did. (I loved the scene with Julia, Sarah and Crosby, where Sarah said “That’s the plan?” when Crosby said he was going to try and talk to Jasmine. Sarah was right, talking was definitely not enough.)

Luckily Jasmine called Julia and confirmed the sleepover. I was glad she didn’t cancel. Sydney is Jabbar’s cousin, and it showed a lot of maturity on Jasmine’s part to keep that relationship alive despite what was going on with her and Crosby. It’s what she should have done the weekend of Max’s birthday party when she took Jabbar out of town. I’m in no way blaming her for what Crosby did, I just disagreed with her decision to deprive Jabbar of attending his cousin’s party because she was fighting with Crosby. It was very sweet when Julia and Joel bailed on their fancy dinner to stay with Jasmine once they saw how hurt she was. Joel went into SuperDad mode and played with the kids (“Hide and go see Israeli army style”? Yes please!) while Julia comforted Jasmine. And later, Joel promised Julia he would never, ever cheat on her. That better not have been heavy handed foreshadowing, because I’d be furious. A sweet and tender moment in what might be the show’s most successful marriage? Yes. A hint at trouble to come? No thank you.

I was very, very happy to see the return of Jason Ritter as Mark Cyr. Could NBC please cancel The Event so he can come back and date Sarah? Amber’s almost done high school now, right? And I like the idea of Sarah with him much more than I like the idea of Sarah returning to Seth. I love watching Sarah grow, and it’s so nice to see her actually have faith in herself for once. I want her to finish the play. I want it to be a believable success. I’m also very glad that Jerry from Parks and Recreation didn’t give her the job of bar manager. Less pay and you have to schedule flaky bartenders’ schedules? Hell to the no.

Back to the Asperger’s storyline. Adam “went rogue” and decided to take Max to an amusement park rather than school. Like I said, he’s struggled with the Asperger’s thing a lot more than Kristina has. The idea came from a very sweet and kindhearted place – he just wanted Max to feel normal and loved and happy for one day. But it was such a bad idea, which was evidenced when the rollercoaster he’d promised Max they could ride all day broke down, and Max had a major meltdown.

Really, though, I think it was a wake-up call Adam needed. He had been so cynical about the script Dr. Pelican gave him and Kristina for talking to Max, which helped emphasize the positive sides to Asperger’s. I understood what he meant when he said “I’m not interested in memorizing a bunch of facts that have been polished up to make it look like he’s won something.” He didn’t want to mislead Max. He didn’t want to tell him that having Asperger’s is great when, in truth, it’s not something people hope for for their children. But I think Adam needed help to realize that a lot of the things he loves about Max – the way he memorized facts and has so much passion and energy for the things he’s interested in – are part of Asperger’s.

Sometimes I just want to shake Adam and tell him that people with Asperger’s can be successful. This is a lame example, but look at Justin and Zev on The Amazing Race. Zev has Asperger’s, and is smart and witty and could possibly win this season. And there’s John Elder Robison, who wrote a memoir about growing up with Asperger’s and his experiences designing cool stuff for the band Kiss. I’m sure there are many other Asperger’s success stories, too. I know we saw a little of that when we met the bug guy, but I just wish someone would help Adam understand that even though Max will always face challenges, he can still have a happy, successful life.

So Adam and Kristina used the script as a guideline, and the conversation went much better.

I know it gets boring to hear my rave about this show every week, but it’s just been delivering stellar episode after stellar episode. The kid who plays Max (Max Burkholder) was absolutely phenomenal this week. I’m continually shocked that a kid so young is able to portray a character like Max without coming across as forced or campy. I’ve heard people say that they don’t watch the show because they don’t like a particular actor, like Lauren Graham or Dax Shepard. But these actors have been so great. The scene between Crosby and Zeek after Crosby got thrown in the slammer for fighting was amazing, and Dax played it perfectly. I feel like ever since the Thanksgiving episode, or maybe even before, the writing on this show has been on a whole new level. I’ve loved Parenthood from the beginning, but lately I think they’ve been dishing out some Emmy nomination worthy material.