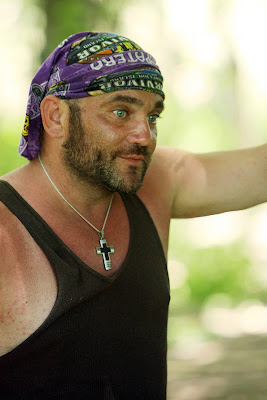 Sorry about that, folks. I just had to let out a sinister cackle of glory over the fact that Russell Hantz was voted out of Survivor: Redemption Island in the third episode.Now I know a lot of people are probably very disappointed by this, and will be keeping their fingers crossed that Russell wins all the duels and reenters the game. And to that I say pshaw. Russell deserved to be voted out. He played poorly and had it coming.

Look at how Russell played the game the first two times. He aligned with young, pretty girls and relied on idols rather than dominant numbers to make his way through the game. He treated people rudely and pretty much did everything possible to convince people that they should NOT give him a million bucks.

It got him to the end the first two times, but both times he played against people who didn’t know his style. These people, they know his MO. If Russell wanted to be successful this season, he needed to play with a different deck of cards. And he told everyone he would do that. But once again he made an obvious minority alliance with the two youngest girls in the game and relied on hidden immunity idols to get him through. But guess what? The problem with that strategy is that there isn’t always going to be a hidden immunity idol. The other problem with that strategy is that people can split votes, so even if you have one or pretend like you have one, someone from your alliance can still go home.

Had Tyson not gotten greedy and messed up the vote in Heroes vs. Villains, Russell’s legacy would be much different. It would look a lot like what happened last night. By immediately aligning with Stephanie and Krista and making no attempt to hide that fact, Russell alienated himself and his alliance from the rest of the group. By obviously searching like mad for an immunity idol, he put himself on their radar even more – so much that they threw the challenge, which I’ll talk more about in a bit. They made a desperate attempt to get Julie to switch her vote, but they were unsuccessful and Russell ended up going home.

So here’s the thing – Russell has always been a jerk. It’s why he can’t win the million. But he was so much of a jerk this time that the tribe purposefully went to Tribal Council just so they could get rid of him. Why? Because he played a crappy game for the first nine days. (Or however long he lasted.) Had Russell played a more low key game this season, kept his head down and tried to be a part of a majority alliance, he could have coasted all the way to the merge. His tribe is physically dominant, so I doubt they would have had to go to Tribal Council very many times. Once the teams merged, he could start to really play. Unfortunately for Russell, his ego was way too big and his brain way too small to do that. 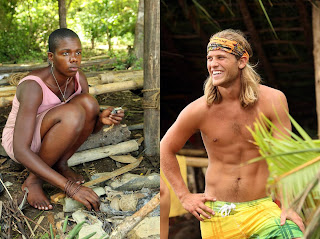 I was really looking forward to this episode because of the duel, and I have to say it didn’t disappoint. I knew from an interview with Mark Burnett prior to the season starting that some players would get to attend the dual as spectators, and I think that’s a great touch. I think the duels will only get better, as you start to care more and more about who wins them. Although I was rooting for Francesca, I wasn’t overly upset when she lost. (Although, damn, it was close!) Next week, though? I’ll be rooting for Matt all the way. Poor Francesca had to throw her buff in the fire (what if she wanted to sell that on ebay?!) and leave the game for realsies.

I thought it was weird that Steve lied to Russell and said that Francesca won, but I guess since he was planning to throw the challenge and vote Russell out it was just another way to sabotage him. As we saw later when Russell arrived and met Matt, though, the lie had very little consequence. So on that note, let’s talk about the challenge. 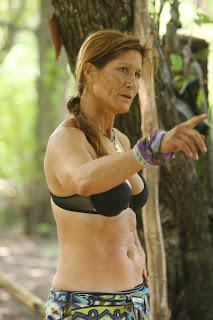 As I mentioned before, most of Zapatera wanted Russell gone so badly that they threw a challenge in order to get rid of him. I understand why they wanted to do this – they’re two up and have a much stronger tribe than Ometepe, especially once they saw that Matt was gone. If you’re calculating risks, it wasn’t a bad one to take.

But Julie, the sole person who voiced her discomfort with an intentional loss, was spot on when she said it was a bad idea. Allowing a team to win gives them momentum, it gives them a burst of energy and excitement that could help them win a few more challenges. And they were only two players up, with a long way to go before the merge. Losing a player on purpose, even if it’s Russell, is never a good idea. If they lose next week, they’ll be even. If someone quits or gets medically evacuated from the game, they could be even. These are all things that need to be considered.

I wasn’t thrilled that they reused a challenge from last season, even though it was a good one. I was even less thrilled that what could have been an exciting challenge (you have to admit, borderline torture is pretty cool) ended up being a snoozer since one team was trying to lose. While I was happy to see Ometepe pull out a win (especially because it meant my mom, who has Andrea, was safe in the office pool for another week) all the glory was gone since we knew it was fixed. 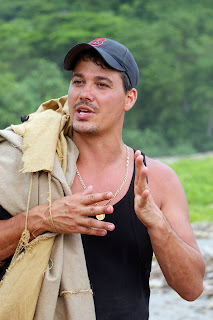 Rob did a good job of talking to Andrea, and she did an OK job of pretending like she forgave him. If she wants to stick around, she really needs to pretend like she’s totally over Matt being voted out. Right now, she’s on the fringes of Rob’s alliance – his core people are Natalie, Ashley (me!), Grant and Phillip. Yep, Phillip. He followed through on his promise to Rob and earned his way “into the rotation.” But that guy is a loose cannon, and if Andrea is smart she’ll be ready and waiting to take his place when he goes up in flames.

I loved watching Rob talk about how he wasn’t prepared to deal with idols last time, but this season he knows what’s up. It couldn’t have been more true. Going into last season I think things were a bit more difficult for people who’d never played with hidden immunity idols – they’ve changed the game, for better or for worse. Rob looked everywhere for the clue, and it turned out to be right under Phillip’s butt. So of course Rob found it, not Phillip. Thanks Phillip, for being so fat! Though Rob, be careful what you say – you’re not as svelte as you once were…

Unfortunately, the clue is rather cryptic. As Rob said, it might as well say “The hidden immunity idol is…somewhere.” I hope he finds it – if Rob plays his cards right, an idol could really help his alliance when it’s time to merge, or if his alliance decides to turn on him.

Russell knew what was up with his tribe – that they’d thrown the challenge and would split the votes – but there was little he could do about it. He had Stephanie approach Julie to flip, and then he spoke to her, and I honestly wasn’t sure what Julie would do. Was she annoyed enough about throwing the challenge that she’d go along with it? It seemed possible.

In the end, no. And I think it was smart of Julie to stick with the plan. First of all, the only thing worse than throwing a challenge is throwing it and then not voting out the person you threw it for. Second of all, voting with Russell and the Bimbos would leave Julie in a bad spot. She’d lose the trust of her previous alliance and their tribe would be splintered in half, four to four. She never saw the idol Stephanie claimed to have, so she had no solid reason to feel safe with them. Plus there was the concern that the tribe could throw another challenge to once again try to vote out Russell.

Really, having Russell and his disgusting rash (Why did he shave his armpits? When? With what? Ew!) around wasn’t doing much for the tribe. To keep things harmonious, it was better for Julie to stay with her solid alliance and hope they keep winning. 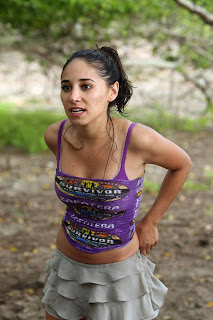 At Tribal Council, Russell and Stephanie were feeling very confident…until the final vote came in and they realized Julie hadn’t gone with them after all. Russell was voted out in the re-vote, but that did nothing to diminish Stephanie’s rapidly growing ego. Russell pledged “I’ll be back, be ready,” (oh, how I hope he’s not) and Stephanie looked at Julie and said “Storm’s a comin’,” which would have been a lot more menacing if Stephanie wasn’t about a third the size of Julie.

What did you guys think about the episode? Are you happy or annoyed that Russell (or Ressell?) is out? Do you think he can win all the duels and make it back into the game? And do you think this season is shaping up to be 1,000 or 10,000 times better than Nicaragua?