Crying? There’s no crying in Survivor!

Watching Russell Hantz lose his first duel and then start sobbing like a little girl when he was eliminated from the game was, in a word, glorious. Look, I’m not going to sit here and pretend like I wasn’t dancing on his grave last night. The guy has been a conceited jackass ever since he stepped foot on Survivor, and last night he finally got his just desserts. He deserved to be voted out, it was his own damn fault, and I’m happy he lost that duel.

I mean, let me just revel in this a moment longer. The guy didn’t just tear up. He actually cried. He covered his face with his hat. His lower lip quivered. He sobbed. He bent over. And then he composed himself enough to deliver a Russell-quality obnoxious rant.

There were aspects to what Russell did that I liked, and others that I didn’t. I think egging Ralph on to the point that he pretty much revealed that he has the hidden immunity idol was brilliant. Ralph was a dummy for taking the bait and giving valuable information to the opposing tribe. (You had to feel for Sarita, though, who looked like she was about to strangle Ralph.) And telling the other tribe who to watch out for? Also a good move. You got voted out, you’re entitled to a little vindictive behavior.

What I don’t agree with, though, was everything else Russell said. How his tribe wasn’t really playing the game, etc. They were playing the game. They just didn’t want to play with him, plain and simple. And the thing is, I don’t think it had to be written in the stars that Russell’s tribe would throw a challenge and vote him out first. They did that as a reaction to his behavior, and that was poor game play on his part. If he’d been more of a team player, they might have kept him around. Russell has no one to blame but himself for this, and I think his tears showed the slightest shred of awareness for that.

Steve’s lie to Russell, that Francesca had won rather than Matt, had predictably little consequence. Russell was mildly surprised to see Matt, and maybe a tad disappointed, but it didn’t matter. A duel is a duel, no matter who you’re up against.

The tribes actually got to choose who would go watch the duel this week, so Phillip volunteered at Ometepe. Because, I don’t know if you heard, but he’s a former special agent. And that means he’s really good at, like, picking up on things and reading people and stuff. But really? Everyone just let him go because they wanted to get his butt out of their faces for a while – literally, people were sick of seeing Phillip in his pink underwear. So he and Kristina were off to see the duel, along with Ralph and Sarita from Zapatera.

The duel was going to be exciting no matter what, since it was Russell’s fate being determined. But the challenge was one of my favorites too, and it was a pretty damn close competition. Matt had me seriously worried when he tipped over his dominoes and they only made it halfway down the course. But after Russell’s course failed too, Fabio 2.0 came back to take a second win. Could this kid win enough duels to make it back into the game? It would be difficult, but you never know.

Since we already talked about Russell’s tears and his rant, let’s skip right on back to what happened in each camp after the duel, and the domino effect Russell’s words had on everyone.

While Phillip and Kristina were at the duel, Rob was dealing with a little challenge of his own. He still had the hidden immunity idol clue, but he needed a chance to look for it. What happened next? Sheer brilliance.

Most people just sneak off to try and find the idol. Rob planned a whole morning about it. He suggested a picnic on the beach to the rest of the tribe, complete with a blanket and party games. Then he started complaining about being constipated. So right after he and the crew lugged all the crap down to the nice part of the beach, he took off to…relieve himself.

Honestly, could that have been a better plan? Considering the story he set into place, I doubt anyone would really want to go looking for him. And the…er…difficulties he was having perfectly explained his prolonged absence. Then when he returned? All he had to say was “I don’t want to talk about it.” Brilliant!

So Boston Rob found the idol, and like the smart dude he is he hasn’t told anyone about it yet.

Speaking of smart dudes, you know who isn’t one? Phillip. Phillip returned from the duel and decided to use his vast federal agent experience to trade intel for keeping Kristina safe. Why? Why would you do that, Phillip? There are not that many people left on your tribe! If you go to Tribal Council, you want them to vote Kristina out! You know why? Because you sure as hell don’t want them to vote you out! Boston Rob was immediately miffed by Phillip’s attempted agreement, quipping to the camera “Don’t you work for me?” Anyone with half a brain could have seen Rob’s annoyance coming. Phillip is supposed to be part of the core alliance, and that should mean he delivers important information without asking anything in return. Phillip needs to at least act like he’s loyal to Rob, and that means not going around trying to save the one chick who’s not in the alliance.

Hey good-lookin’, why the frown? It always looks better when it’s upside-down…

Over at Zapatera, Ralph and Sarita returned with the good news that Russell had been eliminated. Well, it was good news to almost everyone – Steph and Krista sat around with scowls on their faces and then whined that the tribe was going too far in their celebratory digs at Russell.

Was the tribe being insensitive? Maybe. Does it matter? Definitely not. I mean, they threw a challenge to vote the guy out, so the obviously dislike him. And it’s not like his mom is around. Some post-victory Russell bashing seemed perfectly appropriate. But Steph and Krista, they were not playing their cards right. Russell is out of the game. Permanently. Remaining loyal to him is doing those girls zero favors. In fact, all it’s doing is giving their tribemates reason to vote them out before the merge, because they are obvious threats to flip.

Steph’s declaration that they’d really need to find an idol was just proof that she’d let Russell rub off on her WAY too much. Immunity idols are not the sole way to play Survivor. In fact, I think it’s a pretty sissy way to play. Survivor is first and foremost a social game. You make it to the end by forming relationships with people who can help get you there. You WIN by convincing your peers to vote for you. Idols? They’re just an added layer, a gimmick. You can’t rely on them.

The reward/immunity challenge combo this week was good, but Ometepe got blown out of the water. My Survivor office pool pick, Ashley, is on that tribe so I really want them to succeed, but it’s not looking good. They started out with a pretty significant physical disadvantage, and voting out Matt didn’t help them. Grant might look like a human version of Avatar‘s Na’vi people, but he and Rob can’t carry the tribe to victory in a physical challenge. Ralph was like a wood-chopping machine, and David, Mike, Steve, and Julie are all big, strong guys. Oops. I mean big and strong. How’s a dreadlocked former NFL-er and a pudgy fourth-time Survivor player supposed to measure up?

Zapatera handily won the challenge, which meant immunity and a product placement full of tools. That seems like enough, right? Yet, they also won food. BBQ equipment and a bunch of meat and potatoes. If ever there was a challenge to win, that was the one.

A Lesson in Keeping Your Mouth Shut

So Ometepe was headed to Tribal Council, and they had to decide between voting out Phillip or Kristina. Phillip was an obvious first target, since immediately upon returning from the challenge loss he gathered the team up for another one of his classic debriefings. As Rob said, he’s “never one to shy away from a moment in the sun.” How ironic was it that Phillip and Kristina ended up lobbying against one another, when at the start of the episode he’d tried saving her with his information?

Since Phillip was driving everyone nuts with his underwear and his incessant talking, all Kristina really had to do was keep her head down and throw out the occasional “Isn’t Phillip gross?” comment. Instead, she decided to mention the missing immunity idol clue to Andrea. Andrea went and told Rob, and once again Kristina was in the hot seat.

Of course Rob has the idol, but he couldn’t tell them all that. So he played it perfectly, saying that Kristina’s casual mention of the missing clue could be a red herring – maybe she has it again. Honestly, it was a really smart move. Rob is a lot more threatened by Kristina than Phillip, and rightly so. A sneaky person is always more dangerous than an obliviously annoying one. Rob suggested they split the votes again, with Kristina going home unless she played the idol. 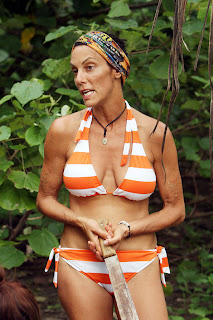 The girls weren’t big on the plan, since they hate Phillip so much, and I was worried it would cause them to break off from Rob. I think one of Boston Rob’s biggest downfalls is that he’s reluctant to relinquish control when the rest of the group doesn’t like his plan. Had he agreed to vote out Parvati before Russell in Heroes vs. Villains, things may have worked out differently for him.

Luckily everyone followed their instructions, and Kristina was sent to Redemption Island. I wasn’t exactly sad to see her go, but I’m going to be very worried if Ometepe doesn’t start winning some challenges.

Did you love this episode as much as I did? What do you make of Russell’s breakdown? Would you have voted Phillip out because of his (lack of) underwear? Discuss.