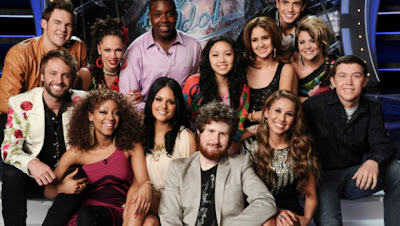 Because American Idol now airs their performance episode on Wednesday night, at the same time as Survivor and ANTM, it means that I can’t really blog about it right away anymore. For me, Survivor beats Idol all the time, every time.

The problem with this? By the time I got around to watching the Idol performance show late last night, I’d already heard a lot of reviews of all the performances. It’s just what happens when you’re a glutton for pop culture news and refresh your Twitter feed every 2 minutes. So I won’t write a major, in-depth review of the show, but just let you know what I thought of each performance so you guys can comment and tell me what you thought too.

Lauren Alaina – Any Mine of Mine
I like Lauren a lot, but I don’t think she had nearly enough sass or stage presence to pull off this song. Hopefully that’s something she can work on as the show progresses, because I think she has a lot of potential. And I’d like to see her do something other than country next week.

Casey Abrams – With A Little Help From My Friends
Casey is amazing, and this was probably my favorite performance of the whole night. He sings with such…aggression, yet it completely works. I find Casey a little puzzling, but he’s definitely one of the best dudes in the competition.

Ashthon Jones -When You Tell Me That You Love Me
I never really thought Ashthon deserved to be one of the thirteen finalists, and this performance proved it. It was just completely blah. Predictable, forgettable, and something I feel like we seen every season on American Idol. Just because a girl looks like a diva doesn’t mean she is one, and Ashthon didn’t have the vocal chops required to pull it off.


Paul McDonald – Come Pick Me Up
No, no, no! I really liked Paul last week and I want him to do well. But not only did he pick an obscure song by an obscure artist, but he didn’t perform it well. Honestly, it was awful. I love everything about this guy, but I hated everything about that performance. Except for maybe his outfit.

Pia Toscano – All By Myself
Critics, people on Twitter, my dad…everyone seems to be raving about Pia after her performance on Wednesday night. But I have to say, I found it disappointing. Can the girl sing? Yes. Definitely. No doubt about it. But that song and that arrangement? Yawn. Pairing about 20 seconds of verse with two minutes of chorus just doesn’t do it for me. She sings pretty, but not pretty enough for me to want to hear the words “all by myself” sung over and over and OVER. I want to see personality from this girl.

James Durbin – Maybe I’m Amazed
I wasn’t a huge fan of James last week, and I didn’t expect much of him this week. But I hadn’t seen a lot of him in Hollywood week, so I didn’t know he was capable of toning things down. But this week he lost the stupid tail and actually SANG, and it was great.

Haley Reinhart – Blue
I felt “whatever” about this song and this performance. It felt very cruise ship amateur hour, and I just don’t have very much to say about it, you know? It was very forgettable.

Jacob Lusk – I Believe I Can Fly
While I will acknowledge that Jacob can sing, what he’s shown us so far has not been my cup of tea. And frankly, he was all over the place during this performance. This guy needs a lesson in Reining It In 101, ASAP.

Thia Megia – Smile
Thia chose a beautiful Michael Jackson Charlie Chapman Chaplin song, but the performance was all kinds of wrong. Thia has a gorgeous, angelic, effortless voice. But she’s a bit robotic and the tempo change midway through was a major mistake. It wasn’t touching or fun, it was just awkward.

Stefano Langone – Lately
Much like Paul McDonald, Stefano is a guy I love who completely disappointed me this week. In Stefano’s case, though, he picked a fabulous song and then butchered it. A Stevie Wonder ballad turned into a dance jam? Why??? Stefano strikes me as someone who could actually put out a popular record right now, so I really wish he’d either gone classic or current, rather than trying to do both. ]

Karen Rodriguez – I Could Fall In Love
Everything was wrong, wrong, wrong about this performance. The outfit? Horrendous. The song choice? Predictable doesn’t even begin to describe it. Maybe cliched would be better? The performance itself? It was a quintessential beauty pageant performance. I literally cringed when she looked directly into the camera with her plastered on smile. Not only do I think Karen is a weak singer, but I find her to be one of the most superficial performers on the show.

Scotty McCreery – The River
I totally called it. Before Scotty even came out, I knew he’d do Garth Brooks. I understand that Scotty had to go 100% country for his “idol” choice, or whatever. And I get that this kid can sing. But he’s looking like a one trick pony right now, and I’d like to see him try and tackle something a little more mainstream.

Naime Adedapo – Umbrella
I feel conflicted about this performance. I actually watched it a second time before writing this, and it did improve my opinion a bit. The thing is, Naima’s performance was fun. Season after season, I moan and complain about how no one on Idol does anything current. Everyone picks the same classic songs that do nothing to prove whether they could be a viable recording artists in today’s pop music landscape. And now a girl comes out and does exactly what I’ve been asking for – she dances, she raps, she sings a crazy popular up-tempo song. And it’s not that good. But it was fun, it showed personality, and after a second viewing I decided to give her a pass on the bum notes because the performance overall was new and daring and she wrote her own rap. Call me crazy, but I liked it.(Sidenote: If you do not actually like Rihanna, or Lady Gaga, or Katy Perry, or any other current pop/dance princess, then much like I have difficulty judging Scotty McCreery, you have no business judging this performance. MmmK?)

Summing It All Up
Overall, I thought it was a pretty decent episode. There’s definitely some talent in the mix this year, and I’d like to see these producers bring out the contestants’ personalities some more. My favorites of the night were Casey, Pia, James and Naima. But I’m still rooting for my early favorites like Paul and Stefano. 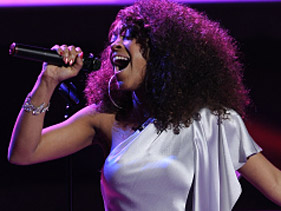 I couldn’t be bothered to watch the results show, since it was over by the time I finished catching up on the performances. Haley, Karen and Ashthon were in the bottom three, and I think that seems completely appropriate. While people like Paul and Stefano might have screwed up, those three ladies all seemed very cookie-cutter to me. Ashthon was eliminated, and that felt right.

What did you think? Was the right person eliminated? Which performances did you think were the best? Did any of your early favorites totally drop the ball?