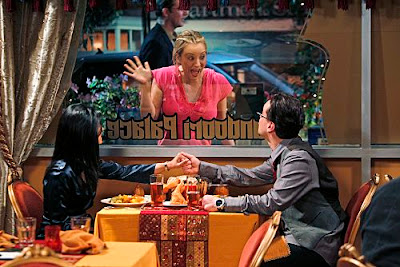 It’s been a while since Leonard was the sole focus of a really good episode, so last night’s episode of The Big Bang Theory was a pleasant surprise.

I really liked what was done with this episode, especially because it in some ways pointed to a Leonard/Penny reunion, which I’m all for. While Penny was being all kinds of sweet and adorable when it came to Leonard and Priya (even though she’s totally not over Leonard), we learned that Priya is a bit of a bitch.

It’s not just that Priya asked Leonard to cut Penny out of his life, although I do think that was cruel. Penny has become friends with the whole gang, and if she can’t be around Leonard then she’ll be left all alone. And probably starving, too, since they feed her. But Priya also wanted Leonard to get new clothes and wear contacts instead of glasses. Penny might have broken Leonard’s heart a little, but she never tried to change him.

This episode hit the right balance of funny and sweet, especially when it came to Penny’s realization that she couldn’t hang out with Leonard anymore. She took the news so well, it makes you root for her even more. And the whole scene where she cheerfully interrupted Leonard and Priya’s date was a great example of Kaley Cuocu’s comedic chops.

Meanwhile, the card trick shtick was a perfectly acceptable subplot. It was simple, but the joke never got old. I knew from the beginning that Raj and Penny were probably lying about their cards, but that made it funnier to watch. I knew everyone was just messing with Sheldon, so it was hilarious to see how far he’d go to try and figure out the “trick”. Plus I could totally relate to Sheldon – I hate magic because I hate not knowing how it’s done.

The show won’t be back until March 31, and I’m looking forward to seeing where things go with Leonard and Priya. Surely Amy Farrah Fowler will be around to comfort Penny, but Priya was made out to be a pretty unsympathetic character this week. I can’t see this relationship lasting too much longer.

What did you think of “The Prestidigitation Approximation”? Now, here are some highlights: