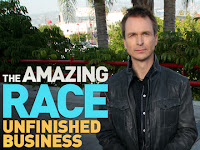 Wow, what an episode, right? For a leg that didn’t result in an elimination (all the teams were told they’re still racing), Sunday night’s episode of The Amazing Race brought plenty of drama. Three teams in particular seemed to really struggle, so let’s talk about them first.

Ron and Christina made it to what would have been the pit stop in fourth place, so it’s not like Ron’s behavior caused the team to self destruct…but holy crap, is that guy annoying or what? From the moment he and Christina arrived in China, his mind was 100% on food.

First they stopped to buy his favorite local street food. OK, they were over an hour ahead of the other teams, so I could give him that one. Buy your little snack, go nuts, move on. Then Ron offered to do the first Roadblock, in case it was eating. However, nothing about “Who’s ready to get charmed” suggested that there would be eating. It was wishful thinking.

After the Roadblock, Ron and Christina delivered more drama when they failed to take a bus back down the mountain. Instead they were on a little cart, which Christina literally fell out of when they tried to flag down the correct bus. Ron practically had a tantrum (seriously, he even threw something – probably food) but they eventually got on the same bus as the Globetrotters. I was surprised Ron and Christina didn’t get a penalty for this. After all, they were supposed to take a shuttle bus all the way down the mountain and they got on half way.

Later, as Ron and Christina rushed to their next task, Ron asked if they could stop and buy some fish, noting that it was being sold at an excellent price. What? What is this? A family vacation? Ron! You’re on The Amazing Freakin’ Race! Get your mind off your stomach and into the game! Ron is like a child who needs to be forced to stay on task at all times. And if I have to hear Christina whine “Daddy!” one more time, I will explode. Dude, you’re like, thirty. Start saying “Dad”.

At the Detour, Ron and Christina chose “Hammer” over “Horn”, which was an appropriate choice. However, the task consisted of using said hammer to make candy, which proved to be extremely distracting for Ron. Is there a doctor on this race? I’m worried Ron might have a tapeworm. Sampling the candy you’ve made once you’ve been handing your clue, I can forgive. Sampling the candy multiple times while you’re in the process of making it? On a race for a million dollars? Yeah, that’s a problem.

I hate that Ron and Christina keep doing so well, because they’re so unlikable and irritating.

Justin & Zev vs. The Chinese Zodiac

Up until this week, Justin and Zev had been doing very well. They were at the front of the pack, and looking like potential winners. This week, that all came crashing down during one task.

Admittedly, I don’t know a whole lot about Asperger’s. Only what they’re teaching me on Parenthood, because most of my life lessons in general tend to come from television. And since I also don’t know anything about Zev, I don’t know how much of his meltdown this episode could be attributed to struggles he may have due to Asperger’s Syndrome.

Zev started the “Charmed” challenge around the same time as everyone else, but had a very, very difficult time completing it. He couldn’t find the final animal required to make up the Chinese zodiac set, and his frustrations quickly got the better of him. So much so, that when he finally found all twelve animals he just hung the clump of them on the mobile, not arranging them one by one like everyone else had.

After a painfully long time, during which the distantly behind Kent and Vyxsin arrived, Zev realized he had to goats instead of a horse. Ouch. Justin and Zev left the Roadblock well before Kynt and Vyxsin, but we’ll have to wait until next week to see if they make it to see Phil first.

I’ve seen every episode of every season of The Amazing Race, but I don’t think I’ve ever seen someone start off a leg on such an epically bad foot (get it? leg? foot? haha? no?) as Vyxsin. What was with that girl this week?

It began from the moment the leg kicked off, with a bizarre squabble over where the car was parked and how to open the doors. Then Kent and Vyxsin couldn’t find the airport, where all the teams would be taking a designated flight from Japan to China. Instead of stopping and asking for directions, Vyxsin continued to rely on a map and a dinky little compass. What is this, 1970? Why didn’t they get out and ask for help? Every BlackBerry and iPhone has Google Maps on it. If a local didn’t know where to go, I’m sure the Internets would have.

After driving for what seemed like eternity, Vyxsin informed Kent that she’d sent him in the complete opposite direction. How he didn’t choke her with her own vibrant pink hair is beyond me, but he remained perfectly calm while she had a panic attack in the back seat. The goths missed the required flight, catching a much later afternoon one instead. Then, just to add insult to injury, Vyxsin momentarily left her passport sitting on the counter.

Once in China, things only got worse. Vyxsin performed the Roadblock, but her head was not in the space it needed to be in order to catch Justin & Zev. Vyxsin struggled just as much as Zev did, wandering around and sobbing about what a stupid person she is. Once again, Kent was the poster child for patience, sitting on the bench in his adorable little hoodie like a sad little goth angel.

Just when you thought Vyxsin was possibly, like, the absolute worst teammate ever, Kent did his share of catastrophically screwing up. While he and Vyxsin rode the shuttle bus down the mountain (after she’d finally completed the task) he realized that he left the fanny pack on the gondola. You know, the thing that contains all the money, passports, and other important documents. What the hell? Is this karma’s way of giving Justin and Zev a second chance?

We won’t know until next week if they goths get eliminated or not, but things certainly aren’t looking good for them. Will they get penalized for missing the required flight? (And why did Kent lie and tell Justin their car had broken down?) Could they ever recover from such a miserable leg? And what the hell happened to Vyxsin? Did she forget to pack enough Xanax to last the whole race?

The Rest of ‘Em

With all the drama provided by those three teams, we hardly got to see anyone else this week. My buddies Gary and Mallory ran a strong leg, but in a surprising turn of events it was Margie & Luke who came in first.

It was funny to see teams reminisce about the last time they’d all been in China. Oh, those were the golden days. Jamie terrified some locals. Jen “called a deaf kid a bitch”. Luke acted like a bitch. Good times. But with Zev and Vyxsin self-destructing this time, China ended up being a pretty easy ride for most teams. 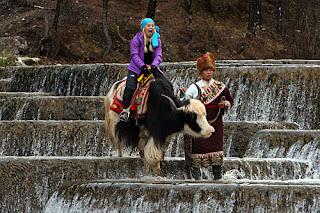 Most of the teams flew through the Roadblock, and the same for the candy-making. (Though the Globetrotters opted to lead a parade through the streets which was, of course, hilarious.) No one even fell off their yaks during that first challenge! Though be honest, weren’t you kind of hoping someone would wipe out? I wouldn’t want anyone to get hurt, but a little spill for comedic effect would have been fun.

The teams came pouring in right after Margie and Luke arrived in first place. The cowboys were second, then Gary & Mallory, Ron & Christina, Kisha & Jen, the Globetrotters, and Jamie & Cara. As for Justin and Zev and the goths, we’ll just have to wait to find out.

What did you think of the episode? I’m not a fan of “you’re still racing”, and it was definitely travel drama heavy, but I thought it still worked. Were you surprised by how much Vyxsin and Zev panicked? Is there anyone you’re dying to see eliminated?

Finally, on a more serious note, I’m sure no one watched this episode without thinking about the devastating situation in Japan. Not to make a little TV blog too heavy or anything, but I hope everyone is keeping the people of Japan in their thoughts and will consider donating to an organization like the Red Cross (American, Canada, or another organization) to help them get through this.