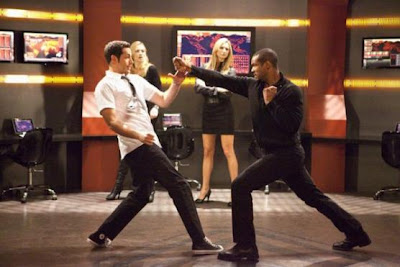 Last night’s episode of Chuck was stellar – a great example of how well the show can work with Chuck and Sarah as a happy couple. I love how Casey’s new team has shaken Chuck and Sarah’s identities as agents, and Stacey Keibler and Isaiah Mustafa were wonderfully bitchy as Casey’s new, super-professional team. Nothing lets a team know that they’re the B-Team like being sent to pick up a dog, and that was the first mission Chuck and Sarah received in weeks.

It turns out that Chuck “isn’t as special” as he thinks. Not only do the Gretas have his dad’s computer, but they have Intersects too. If only there was a way to instill a personality into them… Not only was it a betrayal for Chuck that they were misusing his dad’s work, but it was an insult. Casey dumped his own team to create new Intersects. It’s like being dumped for a girl that looks like you, only a little hotter.

But Casey’s defense wasn’t entirely wrong – he wasn’t feeling like part of the team anymore. He didn’t dump them for a better team, he dumped them to be part of one.

But the Gretas couldn’t measure up to Chuck and Sarah’s combined awesomeness. Female Greta didn’t have the sense to not shoot the villain, when Sarah knew stopping his heart would set of the bomb’s detonator. Male Greta wanted to cut their losses and fly the bomb as far away from people as possible, but Chuck had the guts to try and disarm it. And he did it with apple juice, the most immature of all the juices.

Meanwhile, I like that Ellie finally got a comedic storyline. The show hadn’t been using her that well recently, but I loved seeing her play Jeff and Lester in an attempt to get the laptop her dad gave her. Now that Ellie has the laptop, I’m looking forward to seeing where this storyline will go. I’d love to see Ellie find out Chuck’s a spy again and not only be OK with that, but maybe use some of her insane smarts to help him out – but will Casey’s scary boss get to her first?

In the end, Chuck was told he gets to oversee the whole Intersect project, and the Intersect was removed from both Gretas’ heads. Turns out they never even wanted it. And really, that was the difference between them and Chuck.

What did you think of the episode? I think the storyline had enough meat to be a multi-episode arc, but I’m also really excited to see what will happen next week, when Chuck is involved in finding new Intersects.