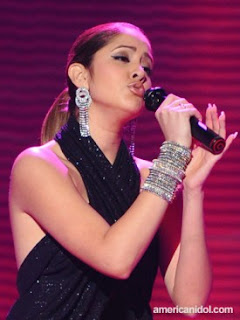 My mom thinks I might get in trouble for making that joke, so here’s a disclaimer:
The title of this post is not a reference to Karen’s ethnicity, but a reference to the fact that she incorporated Spanish lyrics into Every. Single. Performance. And that it was pandering. And that, obviously, it didn’t work.

Karen Rodriguez was voted out of American Idol tonight, and the voters definitely got it right. She was in the bottom three with Naima and Haley, who also deserved to be there. Even though Naima’s performance last night was bad, I breathed a sigh of relief when she was sent back to safety. Yeah, she needs to work on actually hitting the correct notes. But she’s interesting, and I’d like to see her improve.

I really didn’t care for Haley’s performance last night, but I do think she has more raw talent than Karen. There’s an interesting jazzy tone to Haley’s voice, and it wasn’t shown off one bit with that Whitney Houston song. Not only was it out of her league, but it was completely the wrong genre for her.

I can’t believe the judges didn’t unanimously decide not to save Karen. Who wanted to waste the save on her? Steven? I can’t see it being Jennifer – I feel like she’d want to save that for her buddy (and mine) Stefano – but anything’s possible. 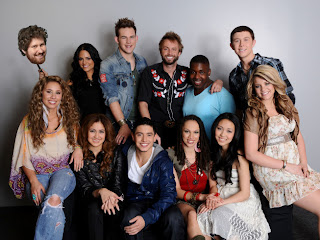 I actually kinda liked the group performance tonight, despite the awkwardness most people are obviously feeling while executing that choreography. (I’m lookin’ at you, Scotty and Paul!) The mash-up of “Born To Be Wild” and “Born This Way” felt very Glee, which is right up my alley.

What did you think of the show? Did America get it right? Did you bother to watch? Did you also take the Black Eyed Peas performance as an opportunity to make a snack?