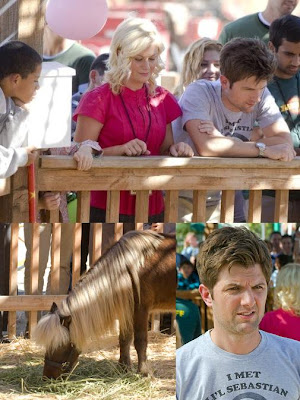 The Harvest Festival finally arrived! And did it ever rock. Honestly, how could it have been any better – there were rides, cotton candy, a curse, games, some lame-o history exhibit, and A MINI HORSE!!!!

I could watch Ron Swanson wave at Sebastian the Mini Horse until the end of time. But first, let’s talk about “Harvest Festival”, because I awesomesauced it.

OK, let’s actually talk about Lil Sebastian some more. He’s old. He’s a mini horse. And everyone loves him. He’s on the same diabetes medication as Jerry, for crying out loud! The only thing better than the universal love for Lil Sebastian was poor Ben’s utter confusion over the whole thing. It reminded me of the episode where he dared to suggest people eat calzones instead of pizza. Adam Scott is at his best when he’s outside looking in. Also? He totally faked being into the horse because he’s in awesomesauce with Leslie. I am dying for those two to get together now.

Leslie and Ben had planned the harvest festival to a tee, but there was one problem – the main attraction, the carnival, was on top of an ancient Native American burial site. And unfortunately, sites of horrible historic events are pretty hard to avoid in Pawnee. So Leslie didn’t move the carnival, and a curse was put on the festival.

I loved that Tom was the one to lose Lil Sebastian, rather than Jerry. Poor Jerry has taken enough crap, he didn’t need to lose the mini horse as well. (When they entrusted Jerry with Sebastian, I was worried the episode would end with Jerry killing him. Or, you know, the mini horse dying and everyone blaming Jerry.)

That was the first manifestation of the curse – the other part was that the power went out, which was actually caused by the very large and negative group of Pawnee media present to report on the cursed festival. I love Leslie Knope’s ridiculous relationship with Pawnee media.

What was so great about this episode was that everyone got to be funny, but it still didn’t feel cluttered. April told Andy she loves him, and he replied with “That is awesome sauce!” and high-fived her. Not the reaction she was hoping for. And Donna helped Ann get over Chris with some advice “Use him, abuse him, and then lose him,” after a hunky Jersey Shore type guy came into the first aid tent.

The resolution of the episode was fantastic – everyone spotted Lil Sebastian in the corn maze while they were stuck up on the Ferris Wheel, and Ron took the opportunity to reveal a few truths – that Tom lost the horse, not Jerry, and that Andy obviously does love April. Awwwww. And then everyone spent the next several hours trying to make it through the corn maze to rescue Lil Sebastian, and they lost Jerry in there. The image of him huddled on the ground, chowing down on raw corn was hilarious.

Ben had abandoned the festival thinking that he was the curse (he’ll never move on from Ice Town, will he?) but he eventually came to his senses and returned, which made for a sweet moment between him and Leslie. They’re so perfect for one another, it’s just insane.

It’s hard to say that this was the best episode of Parks and Rec because the show is just so fantastic all the time, but it was definitely up there. What did you think of “Harvest Festival”? Does it make you want to hit up a carnival? Now, check out these awesome sauce quotes and moments: