Even though I’m a little disappointed that we didn’t get to witness Jay and Pepper’s shopping trip, I think last night’s Modern Family would probably make it into my top five favorite episodes.

Everything was working, from Jay’s storyline with Mitch and his friends, to Claire and Phil’s awkward encounter with a scary neighbor, to Haley’s first gig babysitting Lily. 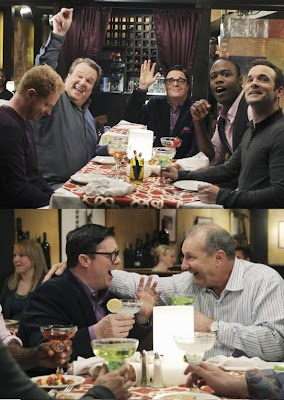 The standout storyline, of course, was Jay’s accidental participation in Mitch and Cam’s boys’ night. After spending way too much time with straight people, they needed a night with their homies – or homos, as Cam cracked. Yep, while Mitch and Cam were discussing boy crushes over a couple of margaritas with Pepper, Longines and the rest of the gang, Jay stopped into the bar for a drink.

Even the way Jay ended up in the bar alone was hilarious – after encouraging Manny to try new things, Jay contradicted himself and bailed on a concert after he realized it was Vivaldi’s Four Seasons, not Frankie Valli and The Four Seasons. After a few extra-strong cocktails, Jay was blowing Mitch’s mind by cracking jokes with his friends and making a date with Pepper to check out a record store in the valley. All the scenes in the bar were a great showcase for Ed O’Neill as a fantastic comedic actor.

You’ve Got a Friend 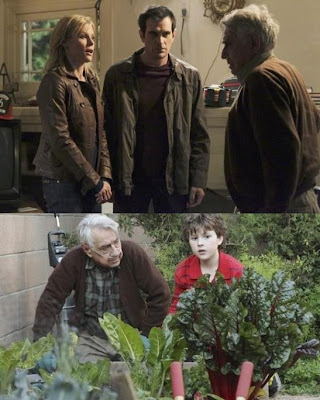 Meanwhile, Claire and Phil got nervous when Luke befriended their creepy, elderly neighbor and embarrassed themselves even more than usual. Luke really shone in this storyline – honestly, the actor who plays that kid has grown more than anyone since this show began. I used to find him hammy, but now he’s hilarious.

Speaking of the Dunphy kids, Alex and Haley had some great moments, too. Alex didn’t play a big role in this episode, but I loved her moments of sheer exasperation as her parents dismissed her concerns over birds falling out of the sky and the imminent end of days.

Haley offered to babysit Lily while Mitch and Cam “got their gay on”, even though they were hesitant to let their sweet and fashionable niece take on that responsibility. Haley, of course, invited Dylan over and then freaked out when Cam saw him on a spy-cam. But she also wasn’t a bad babysitter.

Overall, I thought it was a really strong episode that delivered a ton of laughs – what did you think? Now, check out my favorite quotes and moments: