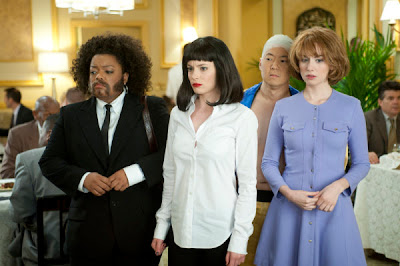 Considering the costumes everyone donned for last night’s episode of Community, I expected the episode to be a little funnier. It’s strange, since Community is a half-hour comedy, but I thought “Critical Film Studies” was good, but not funny.

I mean, there were a few jokes. Annie and Shirley whispering that “everyone hates Britta” after her boss scolded her. The frequent references to another show I love (but one on a competing network!), Cougar Town, had me giggling. But overall? It was wacky, but not as laugh-out-loud funny as Community usually is.

The premise was that Jeff had planned a big Quentin Tarantino themed surprise party for Abed’s birthday, but Abed himself screwed the whole thing up by requesting to have dinner alone with Jeff at a fancy restaurant. Abed was different, and blamed pooping his pants on the set of Cougar Town. (For me, that’s sort of where the episode went South. A pants-pooping joke has to be done a certain way, otherwise it just feels either stupid or awkward.) Abed said he’d given up pop culture (and at this point, I could no longer relate to Abed) and wanted to have a real conversation.

Was the problem in Jeff and Abed’s “real” conversation? It’s not like we learned anything about Jeff. He wants people to think he’s attractive, but is afraid that people only like him for his looks. And once he dressed up as a girl for Halloween. There was nothing earth-shattering there, and it wasn’t particularly funny either.

Jeff lost it when it was revealed that the whole dinner had been staged so Abed could experience something like the movie Dinner with Andre. In the end, of course, Jeff and Abed made up. I hadn’t ever really realized that their friendship had been on the line.

The subplot wasn’t great either – Troy destroyed Jeff’s gift to Abed, which was apparently the real suitcase from Pulp Fiction. Ha ha?

I mean, I still love Community, a lot. I will still recommend it to a lot of people. But most shows have an episode that fall flat once in a while, and I thought “Critical Film Studies” was Community‘s.

Do you agree? Or did you love it? Now, check out a few lines that did make me laugh: