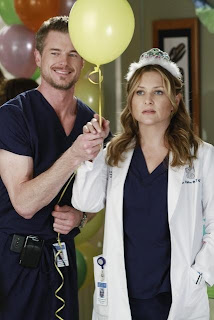 I did not see that coming.

Honestly, Grey’s Anatomy, really? Really?! I know the musical episode is coming up and that the only way such an episode can work is if it’s part of some sort of unconscious fantasy, but did you have to put two of my favorite characters and their unborn baby in a car crash? Come on!

At the end of Thursday night’s episode, I was a little worried about Callie and Arizona. They went through that nasty breakup, Callie came back from Africa to find out that Callie was pregnant with Mark’s baby, and they’d been bickering ever since. And I didn’t blame Arizona. It would be pretty heartbreaking to find out that the woman you loved was having another dude’s baby. And it wouldn’t be easy to accept that that dude will be a part of your life for, well, the rest of your life. Especially if you don’t really like him.

But Arizona’s moody jealousy was ruining Callie’s baby shower – and kind of her pregnancy in general – the way Callie kinda ruined Arizona’s Africa thing. She was having such a hard time with it all that I wondered if this couple could ever get back on track. And a marriage proposal to end a fight? Never good. But just when they had me convinced that it would work, as Callie and Arizona looked at each other in the car, just then – crash.

What do you think? Will we lose Callie, Arizona or the baby in this crash? If they make it, will their relationship be damaged or strengthened? Were you as shocked as I was?

OK, now that I have all that off my chest, let’s talk about the rest of the episode.

So many romantic developments took place this week! Let’s run ’em down. 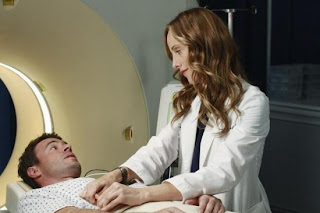 Scott Foley is seriously flirting with Teddy, and she’s having none of it. I want this character to live, and I want him to live happily ever after with Teddy. Is that too much to ask? On Grey’s, probably, but ask I do.

April and Avery? They’re getting pretty hot and heavy. And by hot and heavy, I mean really annoying. Seriously? Come on, Avery is hot but you’re not twelve. You have bedrooms. As long as I can watch Avery take his shirt off again and again though, I’m happy.

The funniest moments on Grey’s last night came courtesy of New Favorite Character April, who was at once disgusted by Lexie and Avery’s PDA and terrified by the thought of taking her pants off for Stark. She thought they were friends, he had different goals. Of course he did – she’s adorable. I reeeeallly don’t want April to cash in her V-chip for Stark. At least not until Grey’s convinces me to like him. 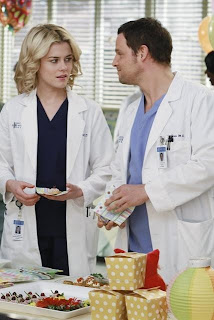 Alex and the hot OB-GYN. Should I know her name by now? Is it Lucy? Whatevs. Anyway, once Meredith told Hot OB-GYN that Alex wasn’t really a tough guy, he’s just had a rough go of things, it was full steam ahead for their relationship. Apparently macho is a red light, but emotionally damaged is bright, bright green! At this point I’m rooting for Alex to be named Chief Resident. Moving into a trailer in the parking lot of the hospital shows major commitment.

Now, let’s discuss some of our established couples. You know, the ones who didn’t get into a crazy car accident this week.

Few things could be more heartbreaking than Adele slowly coming to realize that she does have Alzheimer’s. As someone who has had a family member suffer from the disease, I found it really, really devastating. Will Derek put her in the clinical trial anyone? It’s not a very McDreamy thing to do, but I want him to break the rules in this case. Plus I love getting to see Loretta Devine some more – she has always been one of my favorite actresses. I loved how she dismissed Derek and Meredith’s Post-It wedding.

Since The Chief has so much on his plate with his new diabetes trial and his wife’s new illness, Bailey convinced him to delegate the task of choosing the new Chief Resident to someone else. But not to Bailey! She raised those doctors and won’t do it. But surely, you think, he won’t ask Derek or Owen – they’re married to the front running candidates! But yes. Yes, he chose Owen. And yes, Cristina freaked. Wouldn’t you react the same way? Initially overjoyed because how could your own husband not pick you? And then totally crushed because your husband can’t pick you. Unfair? I think so.

Bailey had a few great moments with Eli the Nurse. They went at it in the hospital over opposing views on a risky new surgery, and then had an intense moment in the parking lot before heading over to Eli’s to go at it in a different way. I would usually find Eli’s demanding tone of voice chauvinistic, but in this case – where Bailey was pulling rank outside the confines of the hospital – it worked. 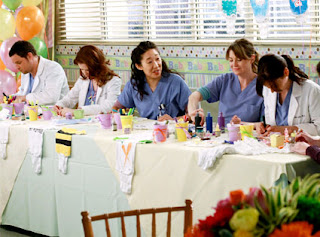 The baby shower stuff was funny – the decorated onsies were awesome – though overshadowed by the final twist. Did you see that  one coming, or were you as shocked as I was? Do you think anyone (baby included) died? Which new Grey’s couple are you rooting for most?