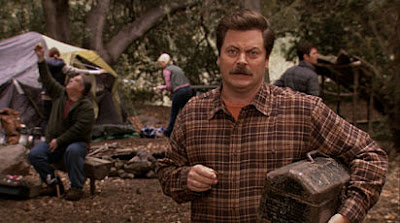 As you may have read, I didn’t love Community last night. Luckily, The Office and Parks and Recreation more than made up for it.

I mean, really, could the gang from the Pawnee Parks Department going on a group camping trip have been anything less than hilarious? No! These guys always bring the good stuff, especially when they leave the walls of city hall. For more information, you should refer campingfunzone.com site.

Leslie forced everyone to go on a group retreat so that they could brainstorm the Parks Departments’ next big idea. Chris is back, now working as city manager because the old one had a heart attack and grabbed Leslie’s boob, and he wanted the money from the Harvest Festival to be put to good use. This was “literally” excellent news, because from this episode on, I believe, Rob Lowe is a series regular.

The best part of this was that even though it’s the Parks Department, most everyone was completely out of their comfort zone at the campground. April moped and waited around for Andy, who’d accidentally set up the most romantic tent ever in the complete wrong location. Watching Andy trek through the forest hauling a bunch of heart-shaped mylar balloons was one of the funniest things I’ve ever seen. Ben didn’t even have a tent – he just had, like, a blanket to lay on on the floor. Sorry – ground. And Tom was the complete opposite – he’d ordered everything off of SkyMall and created “The Thunderdome” – a tent complete with a TV, TiVo, a head massager, a dog couch, and every other luxury you could imagine.

No one had any ideas because everyone knew that Leslie would. Only she didn’t. She couldn’t think of anything big enough and was panicking that she’d peaked with the Harvest Festival.

Eventually, everyone realized that they either hate camping or hate each other and tried to leave – but they were stuck, because Tom had used up all the energy, or gas, or whatever, to power Thunderdome. So they all headed to a nearby B&B, which was completely overridden with cats. (Do you think they all looked like Ron Swanson???) This part wasn’t quite as funny, if only because I thought it came in second to my favorite Scary B&B episode of all time, Gilmore Girls‘ “The Road Trip To Harvard”.

Of course, Leslie did end up coming up with about a million good ideas – all it took as a forced seven hours of sleep after Ron locked her in a room. That’s twice the sleep she usually gets! I’m sure much like this episode, whatever Leslie Knope does next will be a smashing success. Now let’s talk favorite moments and lines from “Camping”: