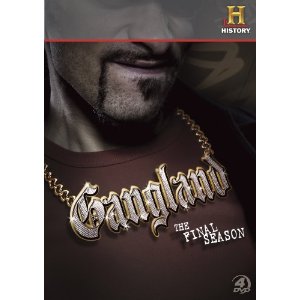 All good things on television have to come to an end. Even on the History Channel, where series tend to live a lot longer than their network counterparts, quality television shows reach a point where there’s no new tale to tell. Thus comes the seventh and final season of Gangland from the History Channel.

Following the tale of criminal organizations and gangs scattered throughout the country in a documentary style. Using law enforcement officials and current/former members of the gangs profiled, Gangland is an hour-long History Channel perspective on organized criminal life in America through the eyes of a particular gang. Showing its origins, from the prison gang culture that brought together many Mexican and white supremacist gangs to immigrant gangs of various ethnicities banding together in common cause, it’s a hard show to watch because it’s the downside of the American dream. Whereas plenty of shows are about people working hard and pursuing wealth through legitimate means, this is a profile of those who want to do it at the business end of a weapon.

It’s the final season for a very good reason: there isn’t much in terms of material left that isn’t going after minor gangs and minor criminals. There’s a difference between covering the Hell’s Angels or the Crips and covering Public Enemy Number I (a skinhead gang underneath the Aryan Brotherhood) and the Asian Boyz from Long Beach, CA. It’s not that they aren’t as interesting as their better known counterparts, in some ways much more so, it’s just there’s only so much you can cover on them before it seems like you’re covering local gangs as opposed to national ones.

It’s a testament to the production crew that they can make foot soldiers of a larger gang and make them interesting, going through their entire history and showing how they got to their current state, but it shows how little material there’s left. After six seasons and plenty of material seemingly left, this seventh season feels like they’re really stretching for material as opposed to having plenty at their disposal like in prior seasons. They also do variations on past gangs they’ve covered including the aforementioned Crips, MS-13 and the Hells Angels.

On the one hand it gives a variation on a familiar theme, as we get to see other chapters of familiar gangs away from their origin sites, but one the other hand it covers material we’ve already seen a number of times already. It shows how much material is left if they’re going with different versions of the same theme, like a Hollywood film repeating a plot and calling it a sequel. It’s nice and entertaining but it doesn’t add any sort of new perspective into the subject.

Most television shows don’t know when to go away, hanging on too long or ending too soon. Gangland doesn’t end with a bang, nor with a whimper, but in a hushed tone.

Presented in a full screen format with a Dolby Digital format, this isn’t a brilliant presentation nor has the series even been so.

All good things come to an end and unfortunately Gangland has done so. But it’s not a bad thing because it really had reached a point of diminishing returns, with a lower level of gang being profiled than before.