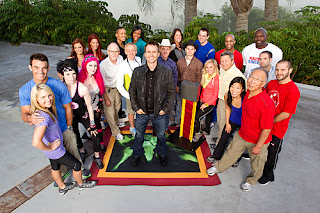 I wonder if every single team would have moaned and groaned when they thought they’d be staying in China if they’d known the alternative was India?

Whenever The Amazing Race goes to India, chaos (and therefore hilarity) ensues. The noise. The insane, terrifying driving. The people. The people! Oh, so many people. India is really a great place for The Amazing Race to go, because it delivers the challenges of a hectic, crazy city with the advantage of a significant amount of English speaking locals. So people get stressed, but not necessarily lost. And this season’s India leg? It definitely delivered.

India 500
Before the teams were told to leave China, they were all instructed to head to a tea shop to taste some mango papaya tea. As one team noted, it seemed pointless – but it wasn’t. Once the teams arrived in India, the first task involved that tea.

After arriving in India to be swallowed up by a sea of people out and about at the airport in the middle of the night,  the teams had to wait outside the Town Hall building until it opened at 10 a.m. In possibly the best moment in Amazing Race history, Big Easy managed to confuse a few teams to run and find the clue box and sign up for something, when really they just had to sit outside a gate. Why was this so hilarious? Because he did it to the already easily excitable Mallory, who ran down the street screaming like a crazy lady and then freaked when she couldn’t find anything. She finally realized they’d tricked her and ran around chirping “I hate y’all!” and hitting everyone. I know Big Easy’s about three times her height, but I think she could take him using sheer spunk. Much like last week’s impromptu basketball game, the stunt showed a rare glimpse of congeniality that we don’t see in most seasons.

For the Road Block, one team member had to pick out the same mango papaya tea they’d had from a massive table covered in cups of tea. Such a good task. I’ve always kind of been a fan of needle-in-a-haystack tasks because those who stay calm usually conquer. Yeah, there’s a large amount of luck involved as well and I certainly wouldn’t want to see one every leg. But it’s always a good idea to throw a few in each season. 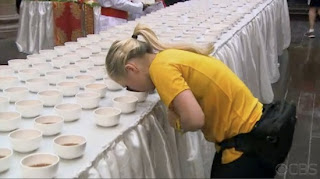 All the teams had different strategies for finding the correct tea. Kisha tried to remember what color the tea had been. Jet tried smelling them until one seemed familiar. Mallory tried pouring them straight onto her face.

Ron found the correct tea miraculously quickly, and he received the next clue – a bottle of iced tea with the clue printed on the inside of the cap. The other teams soon followed suit as Jet, Kisha, Kent and eventually Mallory all found the right tea. Kisha and Jen didn’t open their bottle of iced tea, though, and instead wandered the streets of Calcutta (Or Kolkata? Is this like Bombay/Mumbai? Stop messin’ with me, India!) asking “Is the Snapple factory here?” Despite leaving the Road Block first, Ron and Christina faced some difficulties, too – after their cab driver almost got them killed one too many times, Ron and Christina decided it was “time to cut the cord” and find a less risky chauffeur.

Only three people still needed to find the tea – Flight Time, Luke and Zev. I was a little worried about Justin and Zev’s decision that Zev should do the task. As we saw a couple weeks ago, he has the ability to kind of go off the rails when he gets frustrated. When he smashed the teacup after hearing another “no” from the judge, I was worried he’d lose it. Luckily, he kept working away in his shiny silver pajamas and eventually found the right tea.

That left Flight Time and Luke, so I had to root for the Globetrotter. Not only do I love the Globetrotters, but I’ve really never liked Luke. In his original season, I thought Margie carried their team and I thought he pouted too much. Frankly, there have been plenty of inspiration people with various disabilities run The Amazing Race over the years, and they’ve all had much better attitudes than Luke. I just don’t like the kid, and his behavior in this episode did nothing to change that.

As Flight Time and Luke downed cup after cup of tea, they became more and more exhausted. It was like Dumbledore drinking the poison in Harry Potter and the Half-Blood Prince. Finally, FINALLY, Flight Time found the right one and the Globetrotters took off.

At that point, Luke really fell apart. Like, seriously, to pieces. We’re talking on the floor, sobbing. I mean, really? Really? Come on. The guy is 25 years old and he was crying like a baby. Suck it up! It’s just tea! Everyone else drank it! I would go easier on him if the task had had anything at all to do with being able to hear, but it didn’t. If anything, his other senses – like taste – should be heightened, right? (And don’t even try to tell me that’s offensive – if you can’t joke about reality TV, there’s nothing else to joke about.) The thing is, there is no one on the Race that I’d accept that kind of behavior from. Not even Mallory, and as a munchkin she seems physically incapable of consuming as much tea as everyone else.

I guess I could give Luke all kinds of credit for not quitting and stuff, but frankly I wouldn’t expect anything less than finishing the task. God knows Margie would have given it her all and finished no matter what. So as touching as it was to see all the Indian men clap for Luke and joyfully pick him up when he finally found the right one (were they congratulating him or celebrating the fact that they would finally get to go home?) what I really wanted to give the guy was a great big dose of “Snap out of it!“

By the time Luke had found the tea, the other teams were far ahead. For the Detour, teams had to choose between “Hindu Art” and “Bengali Literature”.

Most teams went for “Hindu Art”, even though it seemed to end up taking longer. For the challenge, each team had to paint and decorate a statue of the Hindu god Ganesha. Obviously the goths went for it, since painting on eyebrows and slathering the color pink all over everything is right up their alley. In fact, my mom has nicknamed them “Pinky and the Brain”. Kisha and Jen also went for this task, as well as Ron and Christina. Eventually, the Globetrotters and Margie and Luke joined them.

In “Bengali Literature”, the teams had to go to a shop and get bundles of books and then transport them via rickshaw to a school. It sounded easy, but anytime you choose to travel in India it looks like you’re both putting your life at risk and risking getting stuck in mad traffic. Gary and Mallory, Jet and Cord and Justin and Zev all went for this task.

India must have been very confusing, because even though Ron and Christina and Jet and Cord left the Road Block earlier than the other teams, they took a long time to arrive at their Detour locations. It was Gary and Mallory who pulled into the lead, despite having only left the Road Block in fifth place.

Gary and Mallory rocked their detour and sped into the pit stop to grab first place and some kind of awesome Snapple-sponsored prize. Snapple’s really getting around, huh? First Tropa-Rocka and Compassion Berry on The Celebrity Apprentice and now this? Also, if I were Snapple I’d go ahead and hire Mallory for some commercials right now, because I’ve never seen someone get so excited about tea before. Especially after downing cup after cup of the stuff earlier that day. Honestly, that girl is just such a delight.

Next Jet and Cord, Ron and Christina and Justin and Zev bombarded the pit stop to arrive in second, third and fourth places. Justin and Zev made up some impressive ground there, considering the difference in Ron and Zev’s performances at the Road Block. Did the extra cash he slipped the cab driver actually pay off? I wouldn’t have thought cab drivers in India needed an extra incentive to go fast – if anything, I bet tourists usually bribe them to slow down. And poor Ron didn’t even get the chance to “disco” as he painted, since he put in earplugs to drown out all the local music. Right behind these three teams came Kent and Vyxsin, who grabbed fifth place.

I was surprised that Kisha and Jen came in sixth, I thought they’d do better than that this week. Yeah, the whole “Can you take me to the Snapple factory?” thing was a bit of a disaster, but they seemed to complete their Ganesh statue pretty quickly. What happened? I sure hope Jen didn’t stop to pee or something.

With the Globetrotters and Margie and Luke battling it out for the finish, the only real suspense would be whether it was a non-elimination leg. Even then, I didn’t think it would be after all the “You’re still racing” moments we’ve had so far this season. The Globetrotters were just too far ahead of Margie and Luke, even though they hit a couple obstacles along the way.

I was surprised the ‘trotters went for “Hindu Art”, because lugging books seemed like the easier task for two very large dudes. Then again, perhaps they wouldn’t have been able to fit in that tiny caged rickshaw. They barely fit in actual cars. Then Flight Time knocked a bucket of paint all over their near-completed statue and almost wrecked it. Honestly, it was like he didn’t even want to win and make me happy. You’ve got to hand it to Big Easy, who merely said “You’re kidding me, man!” That right there? That’s patience. Finally there was some cab drama, which was artfully manipulated to create a vague sense of suspense. But still, it was obvious that the ‘Trotters had a big enough lead to take the seventh spot. Would Flight Time have stopped to hug Margie and Luke as they departed the Detour if he’d really thought they had a chance to catch up? Doubtful. 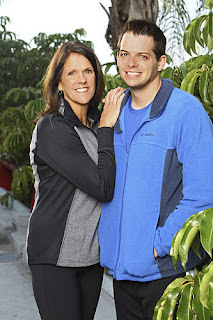 Luke, of course, got to the mat and immediately sat down and cried. I’m sorry, but he just makes me so mad. Stand up and be a man! Stop crying and congratulate your total kickass rock star superwoman mother! Argh! If your 53 year-old mother can stand tall and strong as the team is eliminated, so can her young and fit 25 year-old son. I feel bad that Margie was eliminated, because she is only incredibly impressive lady. She’s no spring chicken, and she pretty much carried their team through two seasons of The Amazing Race. If only her son hadn’t acted like a toddler the whole time.

What did you think of the episode? Were you sorry to see Margie and Luke go, or did you just want Luke to stop crying already? Do you think I’m being too hard on him? Are my veins filled with ice water? Who do you think will take it all? My money’s on Gary and Mallory, but there are a lot of strong teams left.